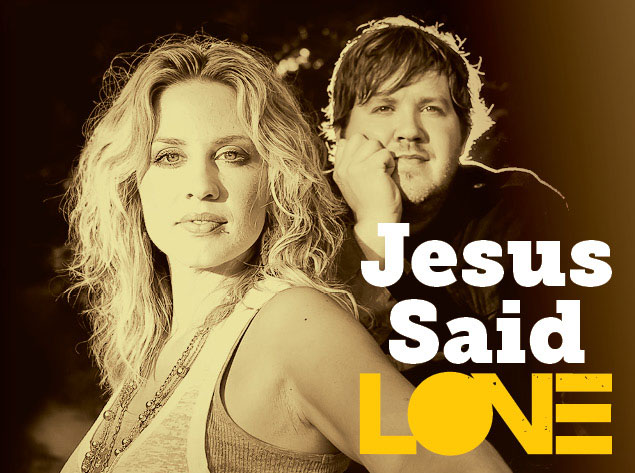 Three simple words sum up the mission of the ministry Brett and Emily Mills have developed during the past decade: Jesus said LOVE

Three simple words convey the vision that motivates the couple to reach into, in their words, the "marginalized" corners of their community and state: Go &gt; Love &gt; Connect.

And three simple words, which might cause an initial double take but ring true, provide the context in which God has called them to seek Him and obey: Jesus Loves Strippers.

Since 2003, Brett and Emily Mills have steadily built a network of hope for exotic dancers along the I-35 corridor. Without any attached obligations and with the help of a small but dedicated support staff, they love their way into the $3.1 billion industry.

Like many working couples, their days start when the sun comes up--making breakfast, packing lunches, herding children off to school. But unlike their traditional working-world counterparts, they don't have an 8-to-5 routine. Their ministry--and sole source of their livelihood--begins when the darkness falls, while their three young children are tucked cozily into soft, warm beds in a quiet Waco neighborhood.

With care packages in hand, Emily and a small group of women don feminine-hued T-shirts emblazoned with the bold slogan that she is quick to point out "isn't a joke; it's a tool"--an effective one and a message of promise for dancers throughout the state. The Jesus Loves Strippers shirts can be spotted on college campuses, in worship services and, of course, for purchase on the Jesus Said Love website, although the group doesn't use the phrase beyond the eye-catching headline on shirts.

"Regardless of what you think of the sex industry, the Bible is very explicit, very clear," Emily Mills says. "Christ's life always gave dignity to and empowered women."

They drive to the clubs and greet the managers by name, some of whom double as financial supporters of the ministry. As they make their way to the back stages and dressing rooms to pass out everything from homemade baked goods to nail clippers and baby wash, they are met with hugs, family updates and recent photos of the dancers' children.

In the early years especially, Emily says, reception was mixed. Some of the women embraced the gesture while others ignored it. Management was wary, wanting to know the cost or the catch. More than anything, the group, she says, was constantly asked, "Why? Why would they come into a place like this, with a love for women like these, with absolutely nothing to gain?"

"Our focus was to go, to love and to connect, and God has seen that through in nothing short of miraculous ways," Brett says. "We're relationship focused; it's the center of what we do. And as the relationship piece is allowed to deepen, the love piece can take shape."

At the heart of their gift for building relationships is a shared history in music ministry. In the late 1990s Brett interviewed his future wife as a potential worship team vocalist to help lead a growing campus Bible study at Baylor. Eventually the couple would be joined by marriage and by a shared calling to reach out to the marginalized as well as to reach out to the church with an unlikely challenge.

"Our culture is so over-sexualized, and the church sometimes struggles to talk about its role in re-directing that course," Emily says. "What we've found is that the body of Christ becomes much less resistant to the discussion when you can offer a human element. Once we began putting a name and a story to the issue, the church, out of love, says, 'Well, of course, Jesus is for her, too.'"

Dixie is the name they use most often. Like the vast majority of dancers employed by Texas' more than 200 strip clubs, Dixie was a mother. She struggled financially, emotionally and with drug use. Although Dixie died tragically in a 2011 motorcycle accident, the final eight years of her life was a time of recovery, relapse and, ultimately, redemption, thanks to the efforts of Jesus Said Love. Today a permanent dancer transition fund bears Dixie's name and allows the ministry to help other women in need of temporary financial assistance get back on their feet.

"Our goal is not to go in [to the strip clubs] and say to these women, 'You have to leave,'" Brett says. "The reality is that it is the most lucrative resource many of them have to survive from day to day, and in that position it can seem like there's no way out. This is not a 'pay your cable bill fund.' Although the money is presented as a gift, we ask them to pay it back if and when they're able to. So far, we have a 100 percent return on that invitation."

Through Jesus Said Love, they have organized baby showers, attended dancers' rehab sessions, advocated in court and hosted play dates between their children and those of the dancers. They now view these women as friends, not causes. Their ministry, once limited to a handful of clubs in and around Waco, has grown into an extended network of teams in Dallas, Bryan/College Station and San Antonio.

As he studied a map of Texas this past summer, Brett realized a common geographic denominator ties together the nomadic nature of the women Jesus Said Love strives to reach. Often living in one town and working in another, or frequently moving from place to place to find work, the women have scarce opportunities to create roots or support systems. And, he noted approximately 40 percent of the state's strip clubs are located along Interstate 35.

"We've been fortunate already to connect a number of women to the resources they need in other cities," Brett, the ministry's self-appointed behind-the-scenes collaborator, explains. "We worked with a woman who was dancing in Waco but needed cancer treatment in San Antonio. We already had a team in place that we could connect with her there to love on her and give her what she needed from an emotional and spiritual support standpoint as she went through that very difficult season in her life."

Recently, they contemplated franchising the ministry model and offering it to partners around the country.

"But God said, 'Wait,'" Emily reflected. "There's something happening in Texas, something we need to do here first."

Together the couple prayed, consulted spiritual advisors and continued to seek the Lord's will until one day Emily opened her Bible to Isaiah 35:8, "And a highway will be there; it will be called the Way of Holiness; it will be for those who walk on that Way."

Thus, LOVE I-35 became the next outreach of Jesus Said Love. The initiative connects ministry teams with churches, businesses, schools and community organizations along Interstate 35 within Texas. In 2014, the plan is to add one new city and grow partnership resources for this network of hope.

"We've been incredibly blessed to find support beginning at Baylor, then into Waco and throughout the other communities we've been able to impact through Jesus Said Love," Brett says. "Our goal is eventually to establish teams in cities all along I-35 and develop a true social enterprise component."

With a long-term dream to reach Austin, Killeen, Fort Worth, Houston, Amarillo and Corpus Christi, the couple say they are exploring how to meet the women's physical, emotional and spiritual needs along with supporting their dreams, from education achievements to entrepreneurship ventures.

"We truly believe--we know, in fact--these women are very intelligent, resourceful people," Emily says. "They're some of the best judges of character. They know how to market themselves. They're great at forming interpersonal relationships. Many of them have a lot of ideas they've not been able to implement because of their circumstances. Our vision is to one day be able to offer an all-encompassing facility where they can come for transitional housing, academic and parenting classes, interview training and employment skills--all under one roof."

"We want to set them up not only for momentary success, but for sustainable success," Brett says. "At the end of the day, Jesus Said Love has shown us that 'success' equals our obedience. We believe the Holy Spirit steps in and continually invites us to something bigger, something transformational and lasting. We're just trying to fulfill the Great Commission by going, and loving, and connecting--and seeing God do what God does."