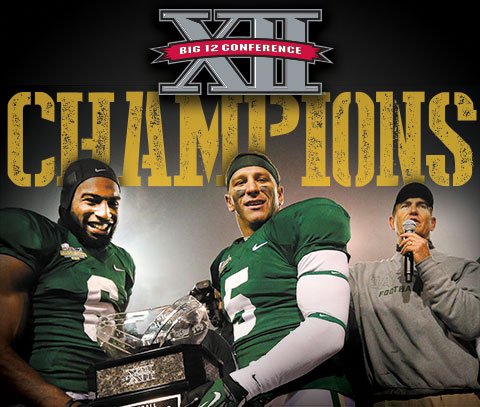 On the night Baylor University introduced their new head football coach six years ago, a group of 16- and 17-year-olds spread throughout Texas and across the country could never have imagined that they would someday be the leaders to turn Art Briles' promise into reality. Baylor? Baylor hadn't been to a bowl game since Bryce Petty was in diapers.

Yet when the Bears took the field in the Tostitos Fiesta Bowl on New Year&apos;s Day, there they were, those high school sophomores and juniors grown to become the embodiment of their coach's commitment to Baylor Nation. In their inaugural BCS bowl appearance, the fruit of their first-ever Big 12 title, the Baylor fans relished one more chance to celebrate a group of players who believed and achieved the best regular season in program history.

Before we turn our attention to the anticipation of 2014, we look back at some of the upperclassmen who led the Bears to the most successful season in the 112-year history of Baylor football. 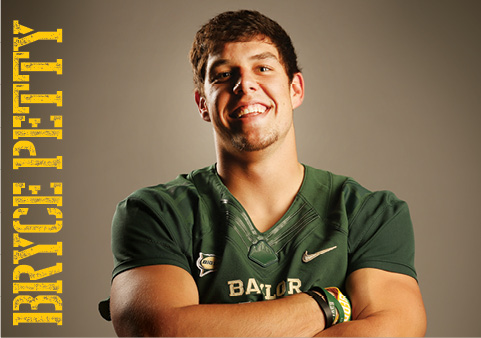 After serving as an understudy for three years behind a Heisman Trophy winner and the top single-season passer in program history, Bryce Petty began writing his legacy this season as the captain of the nation's best offense and as one of the top signal-callers in the nation. The AP and coaches' Big 12 Offensive Player of the Year and Manning Award finalist, Petty threw 32 touchdowns against only three interceptions, added 14 scores on the ground and directed a balanced offense that averaged 359 yards through the air and 260 yards on the ground per game.

KEY STATS: Led Big 12 in total offense, passing touchdowns, pass efficiency and yards per game and had the best yards per completion figure in the nation. His 4,200 passing yards and 32 touchdowns were the third-best single season totals in program history. Etched his name in the record book in just his first season as a starter, passing Cody Carlson for fourth place all-time with 33 passing touchdowns and entering the top-10 list in passing yardage with 4,340 yards.

SIGNATURE MOMENT: In the final game at Floyd Casey Stadium, guided the Bears to three scoring drives and 17 unanswered third-quarter points to snap a 3-3 halftime tie against Texas. Completed 7 of 11 passes and connected with Antwan Goodley and Levi Norwood for two touchdowns to lead the Bears to their first-ever Big 12 title. 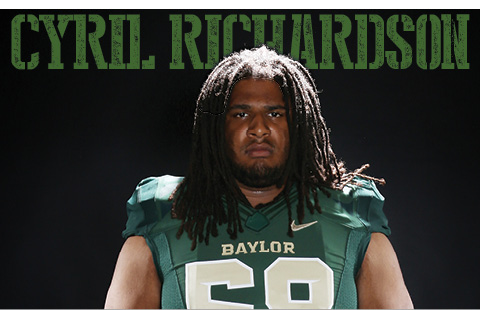 In the history of the Big 12, no player had ever won more than one Offensive Lineman of the Year award. That changed when Cyril Richardson joined the Baylor line. Opposing Big 12 coaches recognized Richardson's vital role in Baylor's success and bestowed that honor on him. Whether at tackle or guard, the 2012 second-team All-American dominated opposing defenses, opening holes for some of the nation's top runners, protecting some of the nation's top passers, and anchoring the best offense in America. Chased to Texas from his boyhood home in New Orleans by Hurricane Katrina, Richardson found a home at Baylor University and will go down as one of the best offensive lineman in Baylor history.

KEY STATS: Anchored an offensive line that led the nation in scoring and total offense this year after finishing second in the nation last year. Adept at both run blocking and pass protection, Baylor's offense experienced great balance behind Richardson, averaging 359 yards through the air and 260 yards on the ground per game, while allowing just 20 sacks on the season.

SIGNATURE MOMENT: It seems impossible to pick just one moment for an offensive lineman who quietly does his job every single play. But it was Richardson's consistency that was his calling card. His signature moment came each and every play that Bryce Petty dropped back without pressure from the opposition, and every time a Baylor runner saw daylight upon receiving the handoff and found holes courtesy of the mammoth, dreadlocked left guard who made everyone around him better. 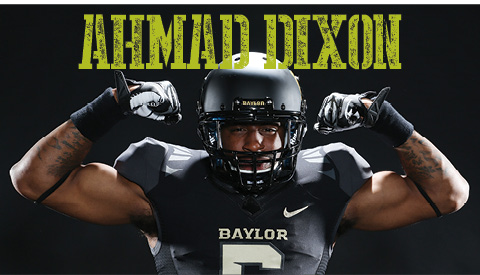 A mainstay in the Baylor defense, Ahmad Dixon began the season in a new position, switching from nickel back to safety in coach Phil Bennett's defense. The move paid dividends as the hard-hitting hometown product made his presence known further back in the secondary. His position-switch was the most noticeable change in a defense that finished second in the Big 12. The highest-ranked signee in the Art Briles era when he arrived on campus, Dixon earned second-team AP and coaches' All-Big 12 honors en route to joining his fellow seniors as Baylor's first class to appear in four bowl games.

SIGNATURE MOMENT: With the Bears clinging to a 28-25 lead in their first road game of the year at Kansas State, the Wildcats forced a Baylor punt and began a drive for the potential go-ahead score late in the fourth quarter. Dixon ensured that their drive would be short-lived, chasing down and intercepting a pass from Kansas State quarterback Daniel Sams with less than four minutes remaining. Dixon's pick led to a Glasco Martin touchdown and sealed the road contest for the Bears. 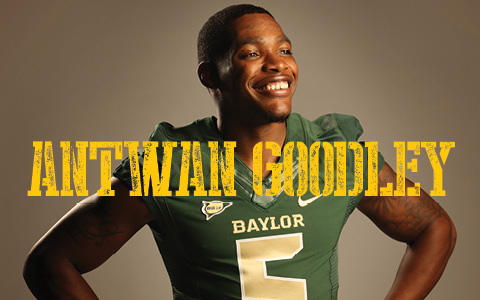 Strong, compact, fast and versatile, Antwan Goodley established himself as an elite receiver in his junior season and filled a key role as the go-to receiver following the wrist injury to Tevin Reese. An AP and coaches' first team All-Big 12 performer, Goodley led the Bears in receiving yards in six of their twelve games and set a new career high with 11 catches and 182 yards in the win over Iowa State.

KEY STATS: Led Baylor and the Big 12 in receiving yards, receiving touchdowns and yards per game. His 1,339 yards represent the third best yardage total in a year in program history, and his 13 touchdowns are Baylor's second-best single-season total.

SIGNATURE MOMENT: In a season filled with great catches by Baylor receivers, Goodley provided one of the most memorable in the Bears' 41-12 win over Oklahoma. After a game-changing interception by Eddie Lackey late in the first half, Goodley stretched as far as he could while maintaining his balance to receive a deep ball from Bryce Petty, catching the back half of the pigskin and holding on while tumbling to the end-zone turf to extend Baylor's lead to 24-5. 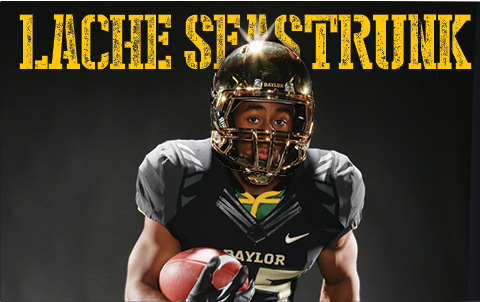 After rushing for 1,012 yards in essentially half a season as a sophomore, Lache Seastrunk's junior campaign was highly anticipated by Baylor Nation. The Big 12 Preseason Offensive Player of the Year did not disappoint, again reaching the 1,000-yard plateau despite battling a groin injury and resting in the second half of numerous games. The electrifying Temple product earned first team All-Big 12 honors from the AP and conference coaches, and almost certainly would have led the conference in rushing were it not for games missed.

KEY STATS: Set new career highs in rushing yards, touchdowns and yards per game, leading the Bears in all three categories. Against Texas, he became the 10th Baylor Bear to join the 2,000-yard rushing club, and is now tied for 10th all-time with 18 rushing touchdowns. Led the Big 12 Conference with 1,177 rushing yards, 107 yards per game and 11 touchdowns. Is the first player in Baylor history to top 1,000 yards in multiple seasons.

SIGNATURE MOMENT: You could almost go with any one of his Seastrunk's long touchdown runs, but choose the one that matched his career-high--an 80-yard scamper against West Virginia that reminded fans of his 80-yard burst against top-ranked Kansas State last year and showed off every bit of his 4.34 40-yard dash speed. 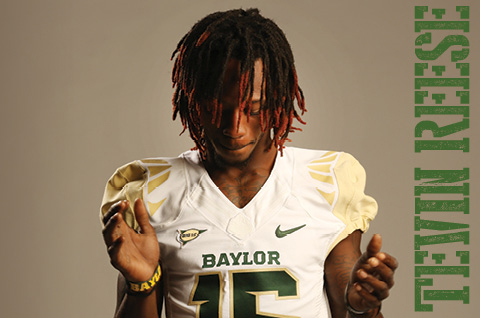 Known throughout Baylor Nation simply as "Sweet Feet," the blazing fast wide receiver's name appears throughout the record book despite missing nearly five full games due to a dislocated wrist. Baylor Nation saw just how valuable Tevin Reese was to the offense after his injury, as it took numerous receivers stepping up to match his productivity. The sight of Reese running in the open is a signature image of the Baylor offense, and Big 12 coaches recognized his contributions with a spot on the All-Big 12 first team.

KEY STATS: Ranks fourth on Baylor's all-time list with 187 receptions, third in receiving yardage and touchdowns with 3,102 and 24, respectively, and produced the third-most 100 yard games in his career with 12. His eight touchdowns in 2013 are tied for the seventh-best in a single season in program history, and his 96 yards per game ranks fourth-best all time. Prior to this season, he produced two of the top 10 single-season yardage totals of any wide receiver in Baylor history, joining Kendall Wright and Terrance Williams as the only players to appear in the top 10 list more than once.

SIGNATURE MOMENT: When the Bears needed a big play, they looked to Reese. With Baylor trailing 25-21 at Kansas State, their first fourth-quarter deficit of the season, Bryce Petty hit a wide-open Reese for a 54-yard touchdown. The score gave Baylor the lead and secured the road victory for the Bears. 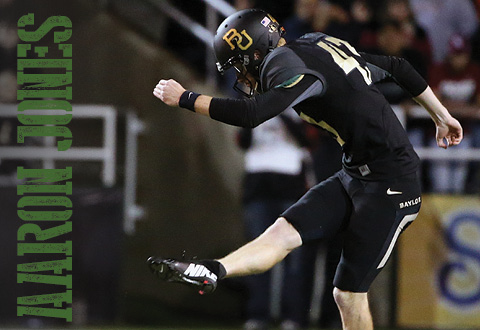 A former walk-on who earned a scholarship his sophomore year, the "Stork" re-wrote not only the Baylor record book, but also the Big 12 and NCAA record books during his time in green and gold. From game-winning kicks against TCU in 2011 and Texas Tech in 2012, to 10 career field goals at the end of first halves, Jones routinely delivered clutch kicks and was automatic on extra points. Conference coaches recognized his contributions by naming him as an All-Big 12 honorable mention each of the last two years.

SIGNATURE MOMENT: Continuing his habit of putting points on the board before heading into the locker room, Jones nailed a 51-yard field goal as time expired in the first half against Iowa State on Homecoming night. The field goal was his fifth of more than 50 yards, the second-best figure among active kickers. Honorable mention for Jones' signature moment could go to his habit of kissing his bicep when a kickoff sails out of the back of the endzone. 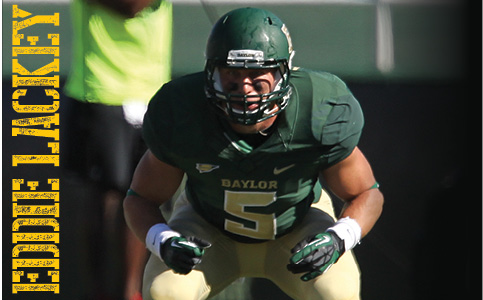 A constant thorn in the side of opposing offenses, Eddie Lackey seemed to be in the middle of the season's biggest defensive plays. Named a first team All-Big 12 performer by the AP and conference coaches, the Riverside Community College (California) transfer displayed a tremendous nose for the football and was at or near the top of the leader board in every major defensive statistical category for the Bears. His two interceptions on the season came against Oklahoma in a blacked-out Floyd Casey Stadium and at TCU, with each changing the trajectory of those games.

KEY STATS: Led the Bears in both solo and total tackles; his 13 tackles for loss was also the highest figure on the team. Finished third on the team with 4.5 sacks, second in quarterback hurries with seven and was tied for second with two interceptions. His 64 solo tackles placed him among the top ten defenders in the Big 12 and his tackle for loss total was good for fifth-best in the conference.

SIGNATURE MOMENT: In a back-and-forth struggle at TCU, Lackey made one of the game's biggest plays. Hanging back behind the receiver, Lackey stepped in front of his man, intercepted the pass and returned it 54 yards for a touchdown. The pick gave Baylor momentum early in the third quarter and extended Baylor's lead to 27-17.