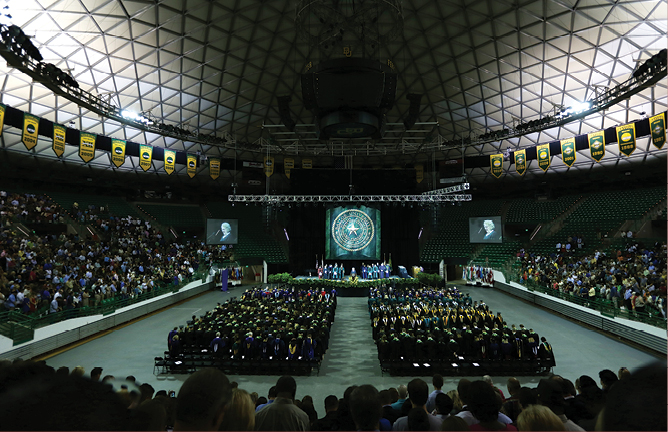 Ss Floyd Casey Stadium turns out the lights for the last time in November, another Baylor Athletic venue will be celebrating a silver anniversary.

On Sept. 22, 1988, President Ronald Reagan spoke to an audience of more than 11,000 in Baylor's new Ferrell Center, the first event held in the facility. Reagan was made an honorary alumnus of the university and was presented with a green satin jacket proclaiming "Our Baylor Bear in the White House."

The Ferrell Center was the culmination of a long quest to build a special events center on or close to campus. Baylor and the City of Waco had originally explored the idea of becoming partners in building and using a city-owned "Brazos Centre" facility located downtown, but Waco voters turned down the proposal in a 1983 bond election.

Baylor decided to proceed on its own. On Sept. 9, 1983, university trustees approved a plan to build a special events center on the intramural fields where the Baylor Sciences Building was eventually located.

By the time ground was broken for the Ferrell Center on June 1, 1987, the location had changed to land adjacent to the Brazos River at the western intersection of LaSalle Avenue and University Parks Drive.

The $10 million, 150,000-square-foot Ferrell Center is named in memory of Charles Robert Ferrell, who died in an automobile accident in 1967 while a student attending Baylor. A lead gift used to build the gold-domed facility came from the estate of his father, Monroe Ferrell of Houston. Waco businessman Paul Meyer Sr. also gave generously to support the project and the center's arena was named in his honor.

The first basketball game in the Ferrell Center was played Nov. 17, 1988, when the Baylor men beat the Adelaide 36ers from Australia in an exhibition game. The center was officially dedicated the following day, and the first commencement ceremony was held there on Dec. 16, 1988. Baylor commencements have been held in the Ferrell Center since then.

In its 25-year history, the Ferrell Center has been the home court for Baylor's nationally renowned men's and women's basketball teams and volleyball team. It has also hosted the inaugurations of the university's last three presidents, been the site of numerous musical concerts and entertainment events, and welcomed distinguished speakers including Archbishop Desmond Tutu, Lady Margaret Thatcher, First Lady Barbara Bush and Gen. Colin Powell.

This past April, President Barack Obama and First Lady Michelle Obama attended a memorial service in the Ferrell Center for the first responders killed in the West fertilizer plant explosion. Thousands of first responders, as well as Texas Gov. Rick Perry and U.S. Sen. John Cornyn, were on hand to pay their respects.