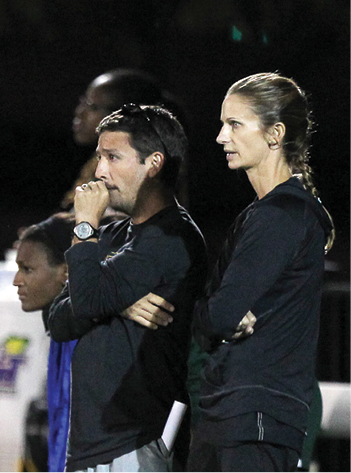 Baylor soccer coaches Paul and Marci Jobson are partners in life, in part because of the game of soccer, and now they have titles that strengthen their partnership in the Baylor soccer program. On the heels of the program's most successful season in 2012, Baylor soccer promoted associate head coach Paul Jobson to the position of co-head coach, along with his wife, Marci Jobson.

"This move allows us to invest more into our team as a staff,"&#160; Paul Jobson&#160;said. "We are married, so we already approach things as equals, and I think this title just illustrates what our relationship has been over the course of our careers. With the promotion, outsiders will now be able to see us both as head coaches and that will allow us to reach out farther in the soccer community."

Paul and Marci met as members of the WUSA's Atlanta Beat. Paul served as an assistant coach for the squad; Marci was a player.

"This promotion recognizes what Paul has accomplished over the past eight years on my staff,"&#160;Marci Jobson&#160;said. "He has been a huge part of what we have done at Baylor, and this move is just the natural progression for an assistant coach who has been very successful."

Baylor began the season ranked 10th in the nation, continuing a tradition of success under the Jobsons' stewardship. Since taking over the Baylor program in 2008, the husband and wife combination has produced unprecedented results.

Baylor has racked up a 58-28-17 record in the tandem's five-year tenure, making Jobson the winningest coach in program history. Before the pair's arrival, BU had endured seven consecutive losing seasons; but since, the Bears have been above .500 in each of the last four years.

Over the past two seasons, Baylor owns the best resume of any Big 12 team with a combined 35-5-8 overall mark and a 10-2-4 record in Big 12 play. Last year, the Bears had the best season in school history. The Jobsons led Baylor to a 19-1-5 record, the program's first Big 12 postseason title, its first berth in the NCAA Sweet 16 and the highest final rank at No. 11.

Before coming to Baylor, the Jobsons were at Northern Illinois where the pair helped lead NIU from five wins in their first season to 10 wins in 2007. Marci enjoyed a decorated soccer career on the field as well as on the sidelines, which included a stint on the U.S. National Women's Soccer team from 2005-07; Paul joined the coaching ranks following a successful collegiate playing career at Presbyterian (South Carolina).