Patience pays off for Petty 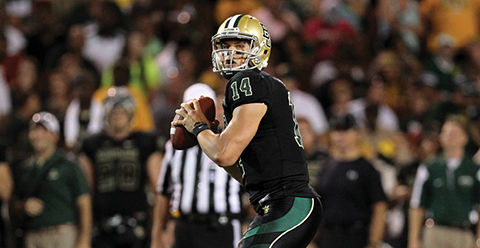 Two summers ago, Baylor quarterback Bryce Petty joined many of his teammates and other Baylor athletes on a mission trip to Kenya. The experience of serving with his fellow Bears underscored an important lesson.

"You can make a difference as an individual," Bryce said. "But when you have a group with a common goal, it makes things much easier. You can accomplish something greater."

Fast-forward to this summer. At Big 12 media days in Dallas, coach Art Briles was asked about his expectations for Petty in the 2013 season. Rather than alleviating some of the pressure for a quarterback who hadn't played significant game minutes since he was a senior at Midlothian in 2008, the always-confident Briles famously set those expectations sky-high: "A reasonable expectation..is to break every Baylor record there is offensively, which is what I expect him to do, and what he plans to do."

Petty, who describes himself as "easy-going" and "goofy" took those comments in stride. In fact, some of those lessons from Kenya could be applied to his coach's comments.

"It's not just all on me. There are so many great athletes out there with me in this offense," Bryce laughed. "I smiled when he said it, because that says what he thinks of all of us on offense, not just me. I've got 10 other guys who are capable of helping me out. Those records would belong to all of us."

Petty's journey to the starting spot in an offense that he compares to driving a sports car has been anything but life in the fast lane. Petty chose to stay closer to home despite Baylor's deep pool of quarterback talent.

Knowing he would have to wait his turn was the easy part. Being at peace with waiting his turn? That took some time.

"It was hard to wait and watch," Petty said. He laughs about it now. It doesn't hurt that the two guys immediately in front of him, Heisman Trophy winner Robert Griffin III and Nick Florence, set the standards by which all subsequent Baylor quarterbacks will be judged. But that didn't really make it any easier.

"I pouted. I can't believe I'm saying it, but I pouted," Bryce recalled. "You always want to think, as a competitor, that you could do those same things at your position."

Petty's time spent waiting can be marked by his academic progression. A junior on the field, Petty went from being a freshmen to a graduate of Baylor University and he is currently pursuing a master's degree in health science studies.

"There was a turning point for me, where finally the pouting mode stopped. I really relied on my faith more and said, 'Hey, this is for a reason. There is a greater purpose in this.' It took me a while to realize that. But it shaped me into the player that I am today, and the person that I am, too. God was with me the whole time, since day one, and He had a time for me to take over. That time is now."

So now, Petty gets to spend his Saturdays doing what he's longed to do since he got here: lead that potent Baylor offense toward their goal of a Big 12 and national title.

But if he weren't out there on the field?

"The one bad thing about football season," he laughed, "is that it comes during duck season. I love to hunt and fish. I love the outdoors and going out there with my dad."

Both Bryce and Baylor Nation are happy that, for now, his big-game hunting consists of Big 12 opponents as the Bears reach for their first conference championship.

"For us, it's Big 12 or bust," Bryce said. "That's the goal, and we can turn that dream into reality. People talk about expectations or identity, but for me, it's about winning. If I don't have an identity at the end of the year, that's fine with me. Because that means I've got great receivers, running backs and linemen who have that identity for me. And, it will mean I have done my job."