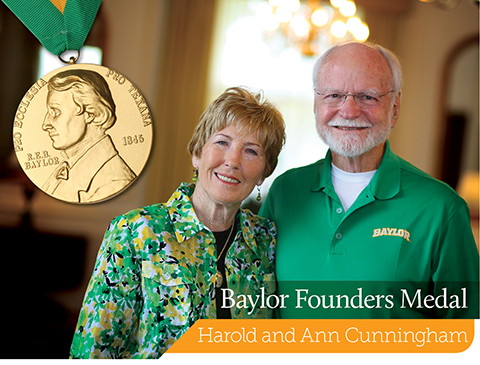 Harold, BBA '56, and Ann Cunningham, BMEd '56, fell in love with Baylor while they were students, an era when Elvis played Waco and Eisenhower gave their commencement address. They fell in love with each other soon thereafter. Evidence of their forward-thinking commitment to Baylor is all over campus and in the hearts of countless students whose lives they have touched.

Harold grew up in Seminole in west Texas, while Ann is from Livingston, in east Texas. The accounting and music majors were both in the class of 1956, but they didn't meet until after graduation. Ann was teaching in Corpus Christi, and Harold was working for Arthur Andersen in Houston, but was assigned to Corpus for several months at a time. They met at Downtown Baptist Church the September after they graduated from Baylor and married two years later.

Because his finances were limited, Harold attended Temple Junior College for two years. He then enrolled at Baylor with the aid of a scholarship, but he also had to work virtually full-time throughout his two years at Baylor, first selling office machines and then as controller for WACO radio station.

"Dr. Emerson Henke was my favorite professor of all time. He really helped me see that I wanted to do public accounting," says Harold. "He was the one who really got me thinking about contributing to Baylor. He told his senior classes that we needed to start giving each year whatever we could to Baylor and continue to give in the future as we could."

At Baylor, Ann sang in a glee club, the Baylor Bards and Rhapsody in White. She was an Athenean (now Kappa Kappa Gamma) and was on the Memorial Dormitory Council.

"Living in the dorms for all four years created such a sense of family, because you knew everybody all over the campus. Upperclassmen and lowerclassmen were together, and so it's just that deep feeling of Baylor being family, that I think stays with you even now," she says.

"Because I play the piano, I did accompanying for a voice teacher and her students. I got to know some really outstanding vocalists and musicians. That was a really good part of my experience here at Baylor," she says.

Ann turned that practice into a career, as she was involved for the next 30 years either in public schools or church music.

The spring of their senior year in 1956, Elvis Presley played at the H.O.T. Coliseum, which Harold attended. "It was a good show; girls screaming all over the place." President Eisenhower spoke at their senior commencement in May.

After Baylor, Cunningham went to work for Arthur Andersen in Houston. The partners he worked under were fellow alums, Walter Plumhoff, BBA '39, and Vernon Garrett, BBA '47.

"Those two were a huge influence on me in those early years, including allowing me to come back to campus twice a year to recruit Baylor students," he says. "I did that for 40 years, and that gave me a huge insight into Baylor. It gave me a tremendous way to stay in touch with Baylor."

Over the years, the Cunninghams have done much more than stay in touch. When they moved to Chicago in 1983, they were involved in Baylor's back-to-school program for students starting or returning to Baylor in the fall.

"Excellence funds are now at every department of every college in the U.S. It's one of the things we started that really worked well," he says.

Upon their return to Houston in 1991, Dr. Robert Sloan, BA '70, was interim pastor at their church, Tallowood Baptist, where Ann had previously been involved in the music program for 13 years. Harold retired in 1996, after 40 years with Arthur Andersen, including managing the Houston audit division for 10 years, managing partner-professional practice litigation of Andersen Worldwide for five years, managing partner-CFO of Andersen Worldwide for three years and a senior partner for six years.

Soon after retirement, the Cunninghams began a long period of their most active involvement with the university.

"Dr. Sloan called and asked me to fill in for a month or so as Baylor's CFO. Six years later, I was still working at Baylor. "

When the Cunninghams first returned to Waco, they lived in a condo on the edge of campus.

"This would probably seem silly to a lot of people, but we could hear the bells at Pat Neff," Ann recalls. "To me, it really was like coming home."

These positions were like stepping stones of service to Baylor, with the opportunity to see what Baylor could and should be in the future.

"At Arthur Andersen, we would complete a 10-year plan to meet the needs of the future," says Harold. "When I came to Baylor, there was no comparable plan in place. We felt that we needed to determine what Baylor should be in the future. For a plan to be workable, we had to decide what the Baylor student of the future would need and how Baylor could fulfill its mandate of educating the students of the future. We could not determine what facilities or finances were needed until we knew what we wanted Baylor to be," he says.

"We then began the process by involving regents, faculty and staff. Eventually, hundreds were involved in the planning process with wide exposure to alumni and other interested parties. It was most important that there was a clear understanding of future needs to all of Baylor nation.

"This took almost three years because of the depth of the planning and involvement of so many people. To see the love and devotion of such a large number of Baylor and non-Baylor people was very gratifying. The result of the process was Baylor 2012."

"Being at Baylor has been and continues to be such a fantastic experience for us," adds Ann. " We get to see the people and the students and be a part of everything that is going on. And it is so different than seeing Baylor from a distance, even if you live in Waco."

Harold is a member of the Baylor Development Council and a director of Baylor Foundation. He served as president of the Houston Baylor Club and chairman of the Hankamer School of Business Advisory Council. He was a member of the Baylor Sesquicentennial Council of 150. He has received the Old Main Award, an Outstanding Alumnus Award in 1986 in the Omicron Delta Kappa Men and Women of Merit program, and the Moon Mullins award in support of Baylor Athletics. The Cunninghams were named Baylor basketball fans of the year 2005-06.

The Cunninghams have played key roles in countless Baylor projects, from making Bear Ridge Golf Course (now called Twin Rivers) a reality to helping fund Ferrell Center locker rooms, the swimming pool at the McLane Student Life Center, and upgrades at Baylor Ballpark. The couple has given to excellence funds in every Baylor sport. They also have helped Baylor acquire and improve the grounds of Baylor's original campus in Independence, Texas.

"Our biggest interest is seeing kids get to come to Baylor, whatever their circumstances," Ann says. "We've been involved in almost everything, but our emphasis has been on the students and scholarships from the very start."

"Scholarships were part of my being able to go to Baylor," says Harold. "We've been able to do that for a number of people and it's very satisfying to see them graduate."

The Cunninghams have made Baylor part of their family's lives as well. Their daughter, Chrisann Goad, BSEd '82, and son-in-law, Alan Goad, BBA '82, and four of their grandchildren, Jennifer Cunningham, BBA '03 Ashley Goad, BS '07, Heather Goad, BSEd '09, and Hannah Cunningham, BA '11, have graduated from Baylor, and grandson Benjamin Cunningham attended Baylor in 2005-06.

"When I look back from the very start, I kept saying, 'What do I want Baylor to be for my grandkids? How can we develop it into what Baylor needs to be?" Harold says.

"For 12 of the 16 years we've been in Waco, we've had at least one grandchild enrolled at Baylor. They brought friends to our house, and I learned to cook for huge crowds of people. It has been just an incredible experience getting to know the students up close and personal," says Ann.

"I think the world has become more aware of Baylor," says Harold, who always wears a Baylor shirt when he travels. He often meets other Bears that way. "We've just reached a new plateau. And I always tell people don't look back. You've got a base to start from, you've just got to work from there. Baylor's still got a lot of work to do, but it's really come a long way. Baylor Nation has great people involved, which will allow them to continue to build the Baylor of the future through the Pro Futuris strategic vision."