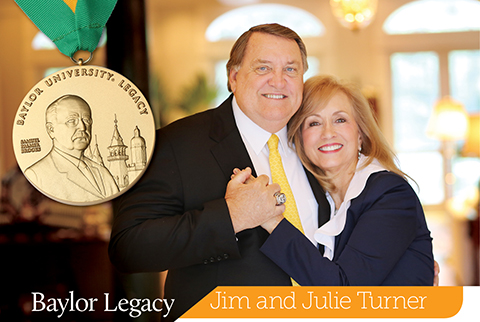 Jim, BBA '69, and Julie Turner, BA '67, MS '68, say they would not be who they are today without Baylor. The Dallas couple has made the place where they met a vital part of their lives ever since.

Originally from El Campo, Texas, Julie (Hermansen) Turner, BA '67, MS '68, cherishes her student years, although she could have done without having to ask permission to wear pants to picnics or wearing a raincoat from the residential halls to gym class because women could not be seen in gym clothes. A participant in club track and field and Student Congress, Julie values the opportunities women have today to more fully participate in sports. Dr. Eveline Kappes, who headed the women's physical education department, convinced Julie to pursue a career in physical education.

"She told me to take as many physical education classes as I could as electives, and then to come see her after I graduated. So I did that, and she offered me a stipend to get my master's degree in physical education.

"Girls back then, especially at Baylor, didn't play many sports. I was really an odd egg because I liked sports a whole lot," says Julie, who earned a master's in physical education and taught at San Jacinto College for 12 years after teaching two years at Baylor. "So seeing what's happened with women in athletics at Baylor has been especially enjoyable. Today, people don't think anything about women playing sports."

As one of seven siblings with an athletic background, Jim Turner, BBA '69, was competitive before he came to college from Houston, but his training on the court and in the classroom at Baylor made him more so.

"Baylor's had a tremendous impact on my life," Jim says. "The number one thing that Baylor did for me, more than anything other than meeting Julie there, obviously, was fueling the desire to be the best and win. That determination, whether it's in sports or in business, is what I took away that has helped me to be successful today. I really attribute it to my competitive sports background and academic challenges that Baylor presented. I look back on that still today because that's not something you just wake up with one day. And I really feel like I got that at Baylor. Whether I'd have gotten it somewhere else, I don't know."

Jim says Baylor folks helped him get summer jobs that eventually allowed him to get his foot in the door of the soft drink industry. This influenced him to change his career path from coaching to business.

"I was a helper on a beverage delivery truck at Coca-Cola in Houston and worked another summer at the American Can Co. that made beverage containers. So I got a taste of it very early and learned the basic fundamentals of business, which always pays off later in your career when you know a little bit about what people in your organization do."

Later, Jim entered the soft drink industry again and worked for the family that owned the Coca Cola Bottling Co. in Houston, and he then ran their business in Phoenix.

It was there Jim convinced his boss to buy the local Dr Pepper franchise, which he did, propelling the franchise to No. 1 in the market. Jim later went to work for Dr Pepper and became president of their bottling division. When it was spun off from the parent franchise company in 1985, the Turners bought the bottling franchises in Dallas/Fort Worth and Waco, later adding more sites in Texas and Oklahoma. They bought other brands throughout Texas and from the Midwest to California on the way to becoming the No. 1 privately owned bottling company in the U.S. Jim has been honored with the most coveted awards in the beverage industry as Man of the Year and as part of the Beverage Hall of Fame.

As the line expanded, Julie came up with the name Deja Blue, which quickly became the No. 1 bottled water in Texas. Over the past 25 years, the Turners have helped to significantly strengthen Dr Pepper's longtime partnership with Baylor.

"My whole career has been built around what started at Baylor," Jim says. "And I always thought it was prophetic that one of my best Dr Pepper franchises was Waco, which was for a long time the No. 1 per capita franchise in the country."

Today, he serves as principal of JLT Beverages LP with investments in beverages, oil and gas, banking and real estate. He was owner, chairman, and CEO of the company he founded, Dr Pepper Bottling Co. of Texas, from 1985-99 before merging with the Cadbury and Carlyle Companies and becoming CEO and president of the combined companies until 2005. Jim is chairman of the Board of Baylor Health Care System where he has served on the Board for 15 years. He is also chair-elect for the soon-to-be formed Baylor Scott &amp; White Health. Jim has been an owner of the Texas Rangers and Dallas Stars since 1995.

The Turners are owner/investors in one of the largest bottled water and beverage distribution businesses in the U.S. "That business today is as large as our Dr Pepper business was when we sold it," says Jim.

As a former Baylor basketball star, All-SWC and All-Academic Team selection who holds the single-game freshman scoring record and is on the top-10 list for average points in a season, Jim says playing a role in Baylor's recent athletics successes has been extremely rewarding.

"There's no question I can appreciate today's success so much more coming from playing in the Heart O' Texas Coliseum, where you had a nail for a locker and were lucky when there was warm water and a light that turned on."

During Jim's nine years as a Baylor Regent (and one as chairman), he served as chairman of the athletic committee and the search committees that landed Ian McCaw, Kim Mulkey and Scott Drew. From one good salesman to another, Jim says that Drew made a particularly strong first impression.

"When we went to Chicago to meet Scott Drew, we walk into this little room, and it's decorated in Baylor colors and Dr Pepper everywhere," Jim recalls. "This young man was trying to sell us on why he should get the job. I'm thinking, 'This guy's gotta be nuts.' Scott was the only person that really, really wanted the job. Others would've taken it, but coach Drew was one of the best hires we've ever made.

"Chairing those committees, working with those individuals and helping to bring them aboard, it really made me love Baylor more, believe it or not," he says. "I have a deep respect for those coaches and the way they have led us to where we are. We are proud of what Baylor has today and the work that went into raising the money, which we participated in with the Turner Riverfront Complex and all of our athletics programs. And we've done that from our heart because of what Baylor has meant to us."

Julie and Jim have been exemplary in giving back to the community. Julie's service has included the Crystal Charity Ball, the Baylor Health Care System Foundation Board, and the Dallas Baptist University Board, where she served as chairman at the same time Jim was chairman of Baylor's Board of Regents. She currently serves on the advisory board for the Salvation Army, the Children's Cancer Fund, and the Cattle Baron's Ball.

Mrs. Turner also has been an active member of the Baylor University Women's Council since its beginning. For Julie, what sets Baylor apart is its people.

"I just don't think there's anyplace where you'll find finer people than Baylor. I just think that the Baylor people put others first," she says. "Jim and I both feel like we owe an incredible amount to Baylor. It set me on a profession that I dearly, dearly loved, and it set Jim on a profession that made him very, very successful. Baylor brought that to us, and I could never repay them for the joy they have given us."