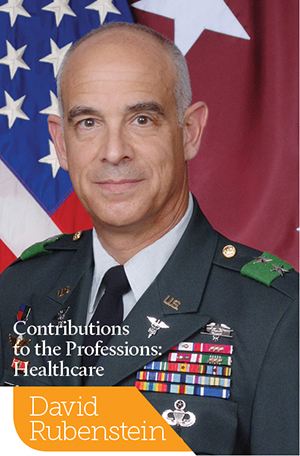 Raised in the South Texas towns of Victoria, Yoakum, El Campo, Schertz and Universal City, retired U.S. Army Major General David Rubenstein, MHA '89, was the first in his family to have the opportunity to attend college. After graduating from Samuel Clemens High School, where his work as a student athletic trainer sparked a career path in healthcare, young Rubenstein's route to college was made possible by an Army ROTC scholarship.

"Since I was going to be in the Army for the next six years after college, if not longer, I figured the best place to take an Army scholarship was a military-type setting. That pointed me toward A&amp;M," explains Rubenstein. After four years there, he was commissioned as a lieutenant in May 1977. As part of the Medical Service Corps, the administrative side of Army medicine, he was first assigned to Germany. It was the beginning of Rubenstein's military career of 35 years spent serving our country, including thousands of troops and their families.

Rubenstein is very proud of his degrees from both Baylor and Texas A&amp;M.

"What I got from each school -- A&amp;M, '73 to '77, and then 10 years later, Baylor, '87 to '89 -- was a superb academic education and superb leadership training, which benefited me and, I would say, the Army, as well as the military health system for years to follow after that," he says.

Located at Fort Sam Houston in San Antonio, the Army-Baylor Graduate Program in Health and Business Administration dates back to 1951. The Army needed a university to help train hospital administrators and Baylor agreed to help. The partnership grew into a master's in health administration program with contributions by military and civilian faculty.

For many years, the Army-Baylor Program has been among the U.S.News and World Report's top 20 programs, including in 2011, when it achieved its highest-ever ranking of 11 out of more than 200 masters of health administration programs in the U.S.

"It's a magnificent and globally respected program which confers a Baylor degree, not an Army degree," says Rubenstein.

Although it seems like a natural fit in hindsight, it took Rubenstein three attempts to enroll in the program. The first two times he filled out the Army-Baylor application, Rubenstein trashed it before mailing it in. In the 82nd Airborne Division at Fort Bragg, N.C., Rubenstein succumbed to the opinions of some fellow paratroopers who thought pursuing the degree was less cool than jumping out of airplanes, he says.

"Two years later I put together another application," Rubenstein recalls. "I had it ready to mail, and a person much senior to me convinced me I should just pursue a master's degree at nighttime on my own time. And so, I threw that application away as well."

After six weeks in another program's night school, Rubenstein found himself on a trip to Germany to give a series of briefings. Joining him was then-Lt. Col. George Masi, a Baylor faculty member who convinced him to drop out of night school and apply to the Army-
Baylor Program.

"The rest is history. When I got back from that trip, I submitted my application and a week later, was accepted for the class of '89. Everything worked out wonderfully. I only regret the fact that I waited so long to start the program," he says. "Any success that I may have had as a healthcare administrator, I attribute to Col. George Masi."

Rubenstein says that mentorship of the kind that Masi exhibited is "absolutely critical."

"We are all mentors to other people," he says. "Col. Masi didn't do it for any personal reason. He did it because he thought it was the right thing for the Army."

"Understanding the importance of questioning everything -- that's what Dr. Finsteun, a statistics professor, did for me as a faculty member. I think that's very important for folks in any career stage, or personal life stage.

"And before Col. Modderman entered my life, I was pretty much a ready, fire, aim kind of guy. And he taught me the value of just taking a deep breath, and exploring and examining an issue and then making some decisions about it."

Those lessons have served Rubenstein well over the years, as he has served in vital roles that often were literally matters of life and death. Rubenstein spent 12 of his 35 years in command. He was Commanding General of the Army's Europe Regional Medical Command. He also commanded the 30th Medical Brigade in Germany, 21st Combat Support Hospital, Task Force Med Eagle while deployed to Bosnia and Herzegovina, 18th Surgical Hospital (MASH), and Headquarters Company, 307th Medical Battalion (Airborne), 82nd Airborne Division.

From 2001-03, Rubenstein commanded Landstuhl, the only U.S. military medical center in Europe, which supports all of Europe, Southwest Asia, Africa and the Middle East.

"During that time, of course, we had the bombings on 9/11. We went to war in Afghanistan, and we went to war in Iraq," says Rubenstein. "One of the strategic accomplishments that I'm very proud of is preparing Landstuhl for war," he says. "That means taking this hospital, which was involved in the peacetime regional support of the military and their families, and putting it onto a war footing -- a hospital that was to receive the combat injuries from war zones.

"We did that very successfully. I'm very proud of the fact that we took this peacetime focused medical center, and turned it into a hospital that was focused on combat. At the same time -- unlike 1990-91 for Desert Storm in the first Gulf War -- we continued to treat military and their family members in Europe and around the region."

Rubenstein testified before Congress during his time as Deputy Surgeon General of the Army.

"It was an opportunity to tell the Army story -- the Army medicine story -- which sometimes, as with any large government organization, doesn't get its side told."

Rubenstein found his final assignment, as Commanding General of the Army Medical Department Center and School, to be particularly fulfilling because of his chance to help envision, design and train the next generation of military healthcare leaders.

After retiring from the Army in June 2012, he became clinical associate professor of health administration at Texas State University in San Marcos, where, fittingly, he monitors and mentors MHA graduate students during their internships, helping them make the transition from academic to hands-on learning. Rubenstein is also a speaker and seminar leader on leadership, ethics and mentoring. He is a current member of five boards, including the United Way of San Antonio, the Association of Military Surgeons of the United States and the United Services Organizations of San Antonio.

Among his dozens of military and civilian awards, he has been awarded the Distinguished Service Medal three times and the American College of Healthcare Executives' highest honor, the Gold Medal Award, in 2012. He has been appointed an Honorary Healthcare Administration Graduate Professor at Baylor and received the Distinguished Alumni Award. Twice he was listed in Modern Healthcare's list of the 100 most influential people in healthcare. Rubenstein has authored a number of works. He has three books in progress -- two on military medical history and one on leading and mentoring leaders.

Rubenstein and his wife, Patricia, have two grown children and one grandson.