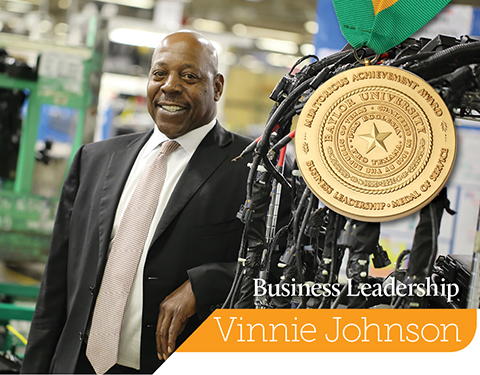 Brooklyn native Vinnie Johnson, '80, grew up playing basketball on legendary New York sites such as Rucker Park. One of eight siblings, he honed his skills to become one of Baylor's greatest players and a two-time National Basketball Association champion. He then turned his hard work and dedication to the people of Detroit, a work that has culminated with the successful operation of multiple businesses in the automotive industry.

As a senior at Roosevelt High, Johnson realized that the NBA could become a reality for him. He performed well against college and NBA players at summer tournaments in New York, and it was at one such tournament that McLennan Community College (MCC) coach Johnny Carter saw him play and convinced him to come to Waco. It didn't hurt that Johnson's childhood friend, Craig Smoak, was already playing at MCC.

Johnson starred at MCC from 1975-77, leading the Highlanders to two conference titles and a regional championship. It didn't take long for Johnson to catch then-Baylor coach Carroll Dawson's eye.

"I had many other options, but I was watching Baylor when I was at MCC, and I saw an opportunity to make a difference in the program," he explains. "And I really liked the Waco area and the people around there that embraced me, so I decided Baylor was for me."

Johnson came to Baylor in 1977 and majored in physical education. Though he was only on campus for two years, Johnson left his mark on the Baylor record books. On the court at the Heart O' Texas Coliseum, he was a scoring machine, averaging 24.1 points per game over two seasons with the Bears. The two-time All-American and All-SWC player holds the Baylor record for most points scored in a game with 50. He was elected to the Baylor Athletics Hall of Fame in 1991.

Although Johnson describes his Baylor squads as "middle of the road-type teams," he made a lot of great memories both on the court and off.

"Our team was a little better than .500, but the program was getting better, and we had some great games," he says. "Waco and Baylor were just a great atmosphere. One thing that really made life easy for me down there was the people. Folks like Preston Baumgartner and Joe Goss and Stan Swift, they would invite me to their homes and take me out in their boats, they just made me feel very welcome. My teammates, Marty Zeller, who was my roommate, Martin Schwartz and the Schwartz family, who also took me in, made me feel very comfortable in Waco. I have a lot of fond memories, a lot of fondness for people there."

Chosen seventh overall in the 1979 NBA Draft by the Seattle SuperSonics, Johnson was traded to the Detroit Pistons, where he shared the backcourt in the 1980s with NBA Hall of Famers Isiah Thomas and Joe Dumars, forming one of the most formidable guard rotations in NBA history.

The Pistons rose to the pinnacle of the sport in the late 1980s, going further in the playoffs each year until winning the 1989 and 1990 NBA championships. Johnson scored 57 points over the last three games of the 1990 season, culminating with his game-winning, 15-foot jumper with less than a second left on the clock to give the Pistons a 92-90 victory. It was this kind of scoring ability that earned him the name "the Microwave."

After 13 years, at age 35, Johnson retired in 1992 playing his final season with the San Antonio Spurs. The Pistons retired Johnson's No. 15 in 1994, honoring his decade of excellence with the team.

When his playing days were over, Johnson kept hustling off the court. After a short stint as an analyst for Pistons radio, in 1995 Johnson and Bill Laimbeer started a business, Piston Packaging, in inner city Detroit's Empowerment Zone -- an area focused on helping improve distressed communities.

"I really wanted to get into business and create some jobs and opportunities. I wanted to do something different outside of basketball, but the main thing was giving back to the city of Detroit for all the support they have given me."

Johnson soon transitioned to the auto industry, creating Piston Automotive in 1996. As CEO of Piston Automotive, Johnson has helped to create hundreds of jobs. He also now serves as chair of The Piston Group in addition to other leadership roles in several companies.

Johnson says his company struggled at times in the first five years or so, but that things really started taking off in 2001 when they began forming joint ventures with Lear Corp., Continental Teyes, and Sachs Automotive.

"We learned some things in those joint ventures, and when they ended in 2005, we focused on Piston Automotive and doing chassis assembly work for the Big 3 and some of the Tier 1 suppliers, and continued to grow."

When the U.S. economy faltered and GM and Chrysler went bankrupt, Ford was the company's biggest customer at that time and continued to grow.

"We grew along with Ford and survived the downturn, but we really have a good management staff, we're very competitive, and we were in the right place at the right time," he says. "When you are able to do those things, you're going to continue to grow and stay in business."

Since then, Johnson's business operations have expanded. While Piston Modules remains located in Detroit, The Piston Group and Piston Automotive headquarters have moved to neighboring Redford, Mich., while Piston Group also has plants near Kansas City, Mo., Louisville, Ky., and Toledo, Ohio.

Active with several charitable and community organizations, Johnson is a member of the Michigan Minority Business Development Council, Detroit Chamber of Commerce and Michigan and New York Sports Halls of Fame.