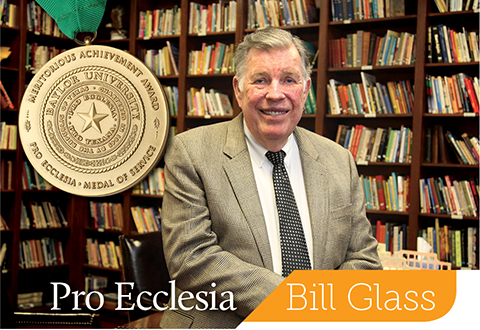 Led to Baylor because he felt a call to the ministry, Bill Glass, BA '57, turned his football success into a platform to share Christ's love in a hurting world.

That decision proved to be a great one for the Corpus Christi native and for Baylor, as Glass and the Bears experienced some of their greatest success in history during his time here with a Sugar Bowl victory over No. 2 Tennessee in 1957, finishing with Baylor's second-highest final Associated Press ranking ever (11th). Glass became a unanimous All-American.

"From the very beginning I really felt very much at home at Baylor and I loved it. I have more friends from my Baylor days than all the rest of the time put together," says Glass, who majored in religion and, along with Dr. Bill Bright, established Baylor's chapter of Campus Crusade for Christ. During his senior year, Glass met his wife of 57 years, Mavis Knapp, '60, at Noonspiration, a daily gathering in the student union building.

The Detroit Lions chose Glass in the first round of the 1957 NFL draft. He became a four-time Pro Bowler, a world champion as part of the Cleveland Browns, and at one point was the highest paid defensive lineman in the league, earning $38,000 per year. Over 22 years on the field (12 as a pro), Glass never missed a practice or game due to injury until his final season.

But the gridiron wasn't Glass's only stage. Beginning in college, Glass often was asked to speak at events. Those opportunities eventually grew into a fulltime ministry with a sizeable staff and thousands of volunteers.

"When I was at Baylor, I got invited to speak because I was a football player. When I became an All-American, I began to speak all over the country, and so I decided I'd need to get seminary training."

During his first six NFL seasons, Glass continued the life of a student-athlete, taking classes in the offseason from Southwestern Baptist Theological Seminary.

When he retired from football in 1969, Glass formally began his evangelism ministry, Champions for Life, then called Bill Glass Evangelistic Association. For more than four decades, the group has shared Christ in thousands of venues across the U.S. and in several foreign countries.

When Glass gave his testimony during the first nationally televised Billy Graham Crusade in 1965 in Denver, Graham suggested Glass should pursue evangelism.

"I said, 'Well, Billy, I'm not sure I'm called to do that. How would I know if I'm called?' He said, 'There are four ways: an open door, an inner impression, a reasonable preparedness, and the counsel of godly men. You were an All-American and just won the world championship in '64, and so that's an open door. An inner impression: only the Holy Spirit could tell you that. You went to seminary and you have about 250 to 300 speaking engagements a year for all these years, so that's a reasonable preparedness. As for the counsel of godly men, I don't know whether I qualify, but I feel that it's what you ought to do.' So I said, 'Yes, sir,' and all these doors just kept opening."

He also added an outreach to prisons, which became a primary emphasis for the organization. Glass believes his ability to relate to various audiences -- meeting outside prison chapels and in other non-traditional venues and bringing speakers such as athletes and bikers with their motorcycles -- has been key in carrying God's message.

On Champion weekends, 300 to 1,000 lay volunteers, called teammates, visit up to 20 prisons or jails in an area concurrently. The organization typically visits between 200 to 300 prisons and jails per year.

"The laymen we train go out in the yard or common area, not just into the chapel where the supposedly Christians go. We get 90 percent attendance as opposed to maybe 10 percent. They're coming out there to see Roger Staubach or Mike Singletary and not to hear a preacher preach. We talk sports for 90 percent of the time, but the last 10 percent, we challenge them to consider their lives. Then we ask them talk to one of our teammates who are spread out through the yard if the inmates want to know more.

"The thing that really resonates with prisoners is this: the truth is that we all have a big problem; we're all sinners, and we all need to be forgiven. The fact is that all sin is just sin, -- it's just that the society labels some sins as crimes, put you in prison for it, whereas, maybe in God's eyes, some of the things you've done are no worse than some of the things I've done. If you put yourself on the same level with them, and say I've got problems, too, then I'm just blessed I found someone to forgive me -- when you have that attitude, I think you can really relate well to them.

"We're unapologetic about drawing a crowd, so we have a tightrope walker, Tino Wallenda. His nephew walked across the Grand Canyon recently. His family's been doing tightrope for 200&#160;years, and he stands on his head on the top of the tightrope and says, 'If I fall, it would kill me. I'd go to be with the Lord, what about you?'"

Later, the teammates go back into the prison and help the inmate thereafter with follow-up groups and halfway houses. Now, after 40 years, many different groups go out on prison yards.

"We've been able to break the ice for a lot of different other ministries that go into the prisons and do all forms of Christian service."

A subject that often comes up in prisons is fathers.

"When a boy feels that his father's behind him all the way, it has a way of strengthening him. It has a way of giving him some guts and some fortitude, and some feeling of self worth. If he doesn't have that, then he could become very dangerous.

"I've gone on death row in many, many states, if not all of them, and I ask the same question: 'How do you and your dad get along?' I've never met a violent criminal that had a good relationship with his father. That's the one common characteristic I've seen in 40 years in prison ministry."

For the past 15 to 20 years, Champions for Life also has gone into schools.

"Sports are a great common denominator because some folks might not listen to a normal preacher, but they will listen to an athlete talk about his faith."

Through it all, Glass has been proud to be part of the Baylor family. He served on the university's Board for nine years, and all three of his children, Billy, Bobby, and Mindy, and three of his grandchildren have attended Baylor. Glass's sons both were All-Conference football players for Baylor.

Glass has authored a dozen books. His latest is an autobiography, Blitzed by Blessings. He has received the Distinguished Alumni Award and is a member of the College Football Hall of Fame and the Texas Sports Hall of Fame.