Alumnus of the Year, Godfrey Sullivan 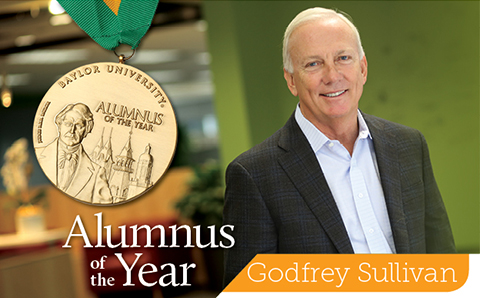 Godfrey Sullivan, BBA '75 grew up in Waco self-described as a "fairly independent kid." That independent streak led him on all kinds of adventures at Baylor and beyond. A decision to head west and then continually reinvent himself and his career during Silicon Valley's technological gold rush has proven to be wise -- or perhaps lucky, as Sullivan would have us believe.

Sullivan's Baylor family legacy is a strong one. His older sisters, Augusta and Meredith, BA '74, attended Baylor, as did his parents, Godfrey Sr., LLB '51, and Viola, BA '40. Mrs. Sullivan also worked as an assistant to Dean Daniel Sternberg in the School of Music for 15 years, overlapping with Sullivan's time as a Baylor student.

"I think my mother took that job just to keep a closer eye on me, but it didn't work all that well for her...she'd say she succeeded as a parent and failed as a watchdog," he says.

Some of Sullivan's fondest Baylor memories are of the Homecoming float building competitions, including one year when he served as float chairman.

"I was part of this wild group of kids called the Taurus Society -- I think they've been permanently banished from campus now -- but I think we won that float competition every year I was there," says Sullivan. "In fact, about the number one thing I learned in my first two years at Baylor was how to use a cutting torch and a welding rod. The float competition is one of the great things Baylor does -- it's good-
natured competition; it's a lot of team spirit; it's a real project that you get to drive down 'Main Street.' You have something you can look at when you're done and be proud of it."

When it came to supporting the Baylor football team, which won the Southwest Conference during his time at Baylor, Sullivan and company were perhaps overly enthusiastic.

"My friends and I started a men's spirit squad one season. We came to a Baylor game with chaps, white cowboy shirts, cowboy hats and 12-gauge shotguns loaded with blanks, planning to fire them off each time we scored," Sullivan remembers. "I think Dean [W.C.] Perry let us celebrate one touchdown, then told us, 'Don't come back with the shotguns anymore.'"

Dr. Perry, then Baylor's dean of students, was one of three Baylor men who left a particularly strong impression on Sullivan.

"Dr. Walstein Smith (BBA '41, LLB '42), who was head of the real estate program, was clearly my favorite professor from an academic point of view. And I would say Dean Perry and President Abner McCall were the people who made the most difference from a 'growing up' point of view."

Sullivan confesses that he was closer to McCall and Perry than he would like to admit, having frequent conversations with them about why Baylor should allow Taurus to remain on campus.

"Actually, I would give them credit for teaching my first lessons on negotiation and diplomacy. The Taurus Society was a really fun bunch of guys but, unfortunately, they were often on the wrong side of the Baylor rulebook.

"I had many conversations with McCall and Perry about what we were up to and why we were an asset to the school. I seriously consider one of my greatest achievements in my time at Baylor to be keeping Taurus from being banned from the school, which I think happened about three years after I left. It was certainly one of my earliest leadership moments, where I was starting to learn how to really deal with adults on difficult topics and have a different kind of conversation than you typically have as a student. It was enormously beneficial for me throughout my life."

By the time he was elected president of Taurus and charged with having those discussions, Sullivan was in a much more serious place in his life. Because of the circumstances, Sullivan says he was simply better able to deal with some of the challenges that came his way.

When Sullivan was a junior, his father was diagnosed with throat cancer. Godfrey Sr. had to stop practicing law and was largely unable to work afterward. The family's emotional and physical suffering was accompanied by financial hardship, and as a result, the youngest Sullivan's Baylor education was in serious jeopardy. Godfrey Jr. had to drop out of school for a semester.

"I painted houses and did whatever I could to save up enough money to afford tuition and finish. It was almost like my life at Baylor was in two very distinct segments -- one was sort of a carefree freshman/sophomore period of my life, and then the second half, I was really pretty serious about trying to finish school and get to work because I just needed to in the worst way.

"Baylor really gave me a great education. They gave me perspective. I learned teamwork and strengthened my horse sense, or my street savvy. As soon as I got out of school. I made a decision to go to California. I really felt like I needed to reinvent myself, just go somewhere and have a clean break and start over. It was accidently a really, really good decision."

In 1980, after a couple of years in the real estate business, Sullivan saw a software product called VisiCalc, which was one of the first electronic spreadsheets in the personal computing market.

"It was running on a thing called an Apple II," he says. "Even though I didn't have a technical background, I had enough of a business background at that time to recognize that that thing, this 'personal computer' was going to change the world. I was aware enough to recognize that the spreadsheet was the single most important change in business in quite some time."

By 1981, Sullivan was working for Apple Computer, then just a small company with approximately 500 people.

"Seeing VisiCalc just made such an enormous impression on me, and so I wound up joining that company in its very early days. The next 11 years was a rocket ship of a ride, with the invention of a new industry -- personal computing. Witnessing the birth of a new industry is a phenomenal experience. You learn something every day, and it teaches you to anticipate a changing future at all times.

Sullivan then went to work for Autodesk for eight years.

"I think I learned most of what I know about being a CEO from Carol Bartz. She was about the only female CEO in a technology company at that time, and she's a powerhouse of a lady and I learned so much from her."

From there, Sullivan joined Hyperion Solutions Corp. from 2001-07, where he became president and CEO. Oracle acquired the company for $3.5&#160;billion in 2007, and it was time for Sullivan to reinvent himself again with another startup company. Today, Sullivan is president and CEO for software company Splunk Inc., based in San Francisco.

"I'd always wanted to take a very young idea and see if I could build it into a global brand. And that's what Splunk is all about, and so far so good. It was a very small company when it started five years ago, and now, we've completed our successful idea and have 6,000 customers in 80 countries.

"It's been as much fun as I could have. One of the things about Silicon Valley is that you get these types of opportunities, and I'm really fortunate to have been able to participate in it."

Although his home is on the west coast, Sullivan has kept in touch with Baylor. It doesn't hurt that Sullivan's parents, now 93 and "sharp as ever," still live in Waco. Their son comes back at least yearly to repair barbed-wire fences on the family farm. In addition to occasionally lecturing at the Business School, he has actively supported endowed scholarships and recent fundraising efforts for the new business school and football stadium.

"If you haven't been on campus for a while, it's a shock to see how much is happening, how many new facilities either have been or are being built, how much the school has improved, how much it's expanded. It's really a thrill to visit campus and see what a world-class institution Baylor has become.

"And so it's easy to be excited about the future because you see the alumni coming back and really supporting the school in terms of the quality of the infrastructure and the quality of the curriculum. You hope at some point in your life that you can pay some of that back. And I would just join probably every other alum in terms of feeling that way. I suspect that's a pretty common story at Baylor."

When asked if President McCall and Dean Perry would be surprised that the young Sullivan would eventually receive the Alumnus of the Year award from Baylor, the current version of Sullivan says, "I think everybody would be -- it would be a large circle of people who would have a smile on their faces when they see my picture in anything that has to do with awards. I was the most surprised of all, followed probably by my parents," says Sullivan. "When you grow up as the problem child, it's not really an outcome you anticipate. So there's some poetic justice here. I hope this will inspire all those quirky, independent problem children who stir things up, to know that they, too, can go on and do something that will ultimately be recognized. So it really is an honor because it would be the last thing I would ever expect."

Sullivan and his wife, Suzanne, reside in Saratoga, Calif. They have two daughters, Hayley and Shea.