Dreaming of What's Next

[Editor's note: Nothing described below is certain to happen; in fact, much of it is a dream, things that could be. These plans almost certainly will change -- perhaps minor tweaks, perhaps wholesale differences. What follows is a collection of ideas that could happen, if priorities and support from generous donors all align.] 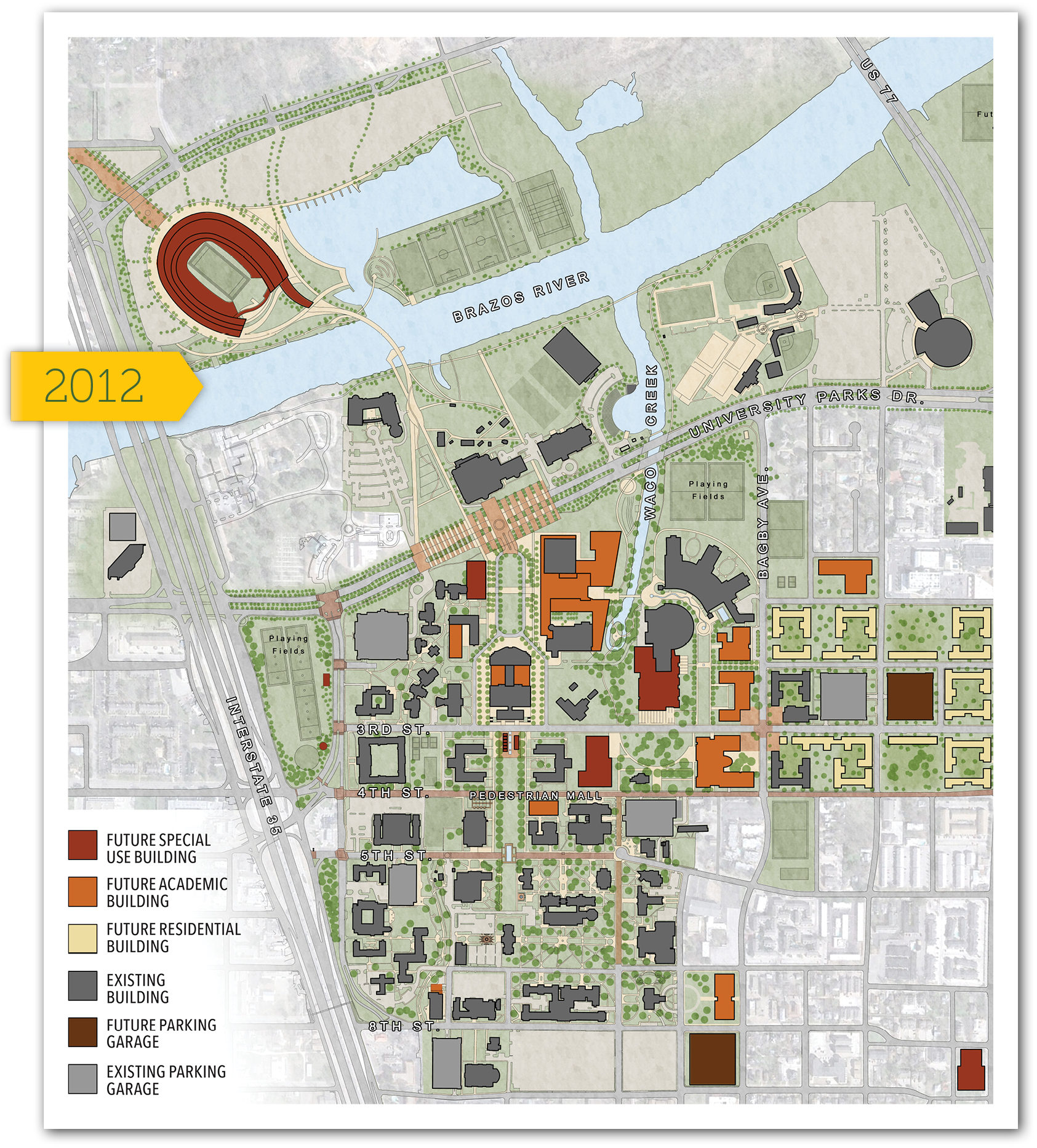 In the next two years, three major additions to Baylor's campus map will be completed: Baylor Stadium (2014), a Baylor track and field facility (2015), and the Paul L. Foster Campus for Business and Innovation (2015). Beyond that, eight existing residence halls -- Martin, Penland, Collins, North and South Russell, Alexander, Allen-Dawson, and Memorial - will undergo major renovations over the next decade.

Additional bricks-and-mortar projects may help expand programs and services for students but they will require donor leadership and support to become reality. Until then, these projects remain "what ifs" and dreams. Based on the most recent campus master plan compiled in 2012, a few of the potential additions included:

Arts district: Tentative plans have been discussed to expand the existing Hooper-Schaefer Fine Arts Center and Glennis McCrary Music Building into an arts district, where both Baylor and the entire Waco community could come for concerts, theater and art. Such a project could do for the arts what the Baylor Sciences Building has done for the sciences at Baylor, as the project would be on a similar scale.

Clinical sciences: Training practitioners and teachers of science, technology, engineering and math (STEM) has been named a national priority. Efforts to enhance Baylor's contribution to these fields have been ongoing. In addition to expanded teaching and research space, a dedicated clinical sciences facility near the BSB would enhance several Baylor clinics (communications disorders, psychology, etc.) that offer students the opportunity to serve real patients while at the same time providing much-needed services to the community. A new home along Bagby Avenue could provide an improved setting for both students and patients.

Engineering and computer science: Although the Baylor Research and Innovation Collaborative (BRIC) provides some research space for these growing programs, the Rogers Engineering and Computer Science Building is still nearly overflowing. An expansion of Rogers and/or a new home near the Foster Business Campus would provide room for continued growth and development of new programs.

McLane Student Life Center expansion: An extension of the McLane SLC, stretching south almost to Third Street, could include a natatorium.

New student union building: Penciled in behind the Sid Richardson Building, a new SUB would better serve Baylor's expanded student body in a more central location, as the campus has expanded to the east. The Bill Daniel Student Center could then be remodeled for academic use.

New residence halls and parking: The next 10 years of residence hall improvements will focus on upgrades to existing facilities. But when the time comes to build anew, current plans call for most of that growth to go near East Village. Parking garages also are penciled in near any new residential spaces, both east and south of campus.

Looking way down the road, what might the Baylor campus look like? In the last 50 years, the university's footprint has grown significantly in size; even a less extensive expansion over the next half-century could see a north campus -- perhaps focused on graduate education and opportunities -- develop around BRIC and Baylor Stadium.

What will the campus look like half a century from now? No Magic 8 Ball can tell us. We'll just have to ask our children and grandchildren to give us a tour when 2063 rolls around.