A look at the Master Plan 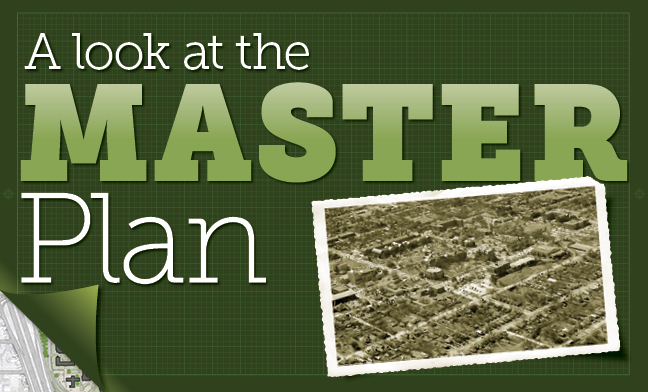 Following World War II, American birth rates jumped significantly; that generation, born between 1945 and 1964, is known today as the Baby Boomers. The first of those children arrived on the Baylor campus as freshmen in the fall of 1963 -- exactly 50 years ago. When they got here, they found a campus that had enjoyed a bevy of new growth over the previous decade, as buildings such as the Tidwell Bible Building, Hankamer School of Business and Marrs McLean Science Building (not to mention several residence halls, including Allen, Dawson, Martin, Collins, Penland and Russell) were all less than 10 years old. (Work on I-35 had barely begun and wouldn't be completely finished -- for the first time -- until 1972.)

A new master plan for the Baylor campus is compiled every two to three years. Click below for examples of how some plans for Baylor's future have come to completion -- and how some have changed -- over the past decade. 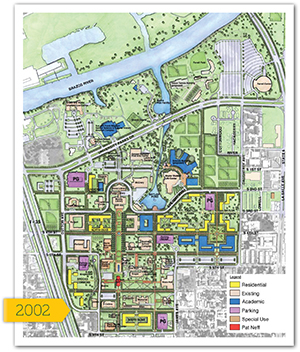 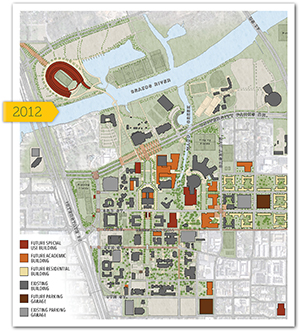 By the time the Baby Boomers' children arrived at Baylor in the mid 1980s, the campus had grown farther to include such campus landmarks as Moody and Jones libraries, Sid Richardson Building, Castellaw Communications Center and the Ferrell Center.

Today, many of the Class of 1967 have grandchildren enrolled at Baylor who are enjoying the latest additions to campus -- facilities such as the Baylor Sciences Building, North Village and East Village residential communities, and the McLane Student Life Center. Some of them will be the first students to take classes in the Paul L. Foster Campus for Business and Innovation or to run with the Baylor Line at Baylor Stadium.

Baylor's campus has seen a tremendous expansion over the last half century. What will the next 50 years look like? University leaders are always thinking about such questions; their best guess at any given time is revealed in the campus master plan.

Baylor administrators keep an eye on what campus development might look like over the next five years, 10 years, 20 years, even as far as 50 years into the future.

"Baylor's campus has obviously changed dramatically in the last 50 years," says Dr. Reagan Ramsower, BBA '74, MS '76, the university's senior vice president for operations and chief financial officer. "You might think, 'Well, yeah, 50 years is a long time.' But it's just one person's lifetime, and you've got a dramatically different campus. How does that happen? To what degree do we want to sculpt the way that happens? That's the context of long-term master planning.

"There's no way that a person 50 or 60 years ago could have envisioned all the things that have been built since then, but you can at least begin to think about a plan. Maybe you can't get 50 years out, but you can start to see some things in a 20-year time frame. You should certainly have some visibility into a 10-year frame, and five years should be almost entirely visible. So, you start from there."

Baylor's Office of Facility, Planning and Construction maintains a deferred maintenance schedule, which considers the condition of campus buildings and determines which ones most need to be either renovated or demolished.

One such study, completed in 2009, found that Floyd Casey Stadium and Marrs McLean Science Building were Nos. 1 and 2 on the list. Instead of spending $80 million to renovate Floyd Casey, university administrators decided to build a new stadium funded through private and public contributions coupled with $100 million generated through increased athletic department revenues. On the other hand, Marrs McLean Science, because of its central location and mirror image in the Sid Richardson Building across Fountain Mall, was slated for renovation -- a project that was completed this summer.

As the campus grows, additional space is often needed -- for classrooms, offices and residential living.

After the BSB opened in 2004, a few overflowing departments utilized Marrs McLean's rooms as needed, but the chemical and environmental issues one might expect to find in a 40-year-old science building needed to be addressed in about half the space. Even the rooms without problems weren't exactly designed for, say, a communications or education class; they were designed for science laboratories.

Following the yearlong renovation, Marrs McLean Science reopened this fall as the new home of the Baylor School of Education and with expanded space for the anthropology and statistics departments. The School of Ed's move out of Burleson Hall and Draper Academic Building, in turn, frees up space for the College of Arts &amp; Sciences to expand, fulfilling two space needs with one effort.

Dreams are the projects that could help advance the university's aspirations and cultivate an environment of community, but aren't necessarily required for university operation. Several years ago, there was talk of expanding the Bill Daniel Student Center, but a feasibility study found that it would be more cost effective to tear down the BDSC (or SUB) than to remodel and add onto it.

Then sometimes projects emerge because a donor comes along and says, "I'd like to see Baylor do this, and I'm willing to financially make it happen." If such a project makes sense for the university, then it can move ahead. The McMullen-Connally Faculty Center, which opened five years ago this fall, is one such example.

"Faber McMullen (BS '53, MD '56), a wonderful gentleman, came to us wanting to honor the professors who had impacted his life here at Baylor," recalls Ramsower. "He had visited a new faculty facility at another university and thought a new faculty center would be a fitting tribute here at Baylor, and we agreed."

Other such projects include Baylor Stadium, where Drayton McLane, BBA '58, led the way, and the Baylor Research and Innovation Collaborative (BRIC) which began with the donation of the former General Tire plant by Clifton Robinson, BBA '63, his family and H. Bland Cromwell.

Every two to three years, the university completes a new campus master plan, accompanied by a map like the one pictured on the following pages. The Office of Facility, Planning and Construction works with an architectural firm to design a plan; the architects take into account any of Baylor's current projects or plans and spend a great deal of time walking the campus to get a feel for the area. Once a draft of the new plan is created, it's taken before university Regents for feedback.

Baylor officials are always on the lookout for land around campus that may come up for sale. When such land comes available, they consider whether or not it's worth purchasing and putting into what Ramsower calls a land bank -- real estate for which the university may not yet have a specific purpose, but that might be needed down the road.

"Baylor's fairly unique in that we have some property options," Ramsower says. "A lot of universities are landlocked. Assuming Baylor keeps growing over the next 50 years, we'll have need for more land. It is helpful to purchase early in the development stage. Being pro-active, thinking about long-term development, and developing this land bank can be a prudent way of planning for the future."

Ramsower likes to show interested parties an aerial photo of the Baylor campus taken in the late 1950s, then contrast it with what visitors to campus see today.

"We're planning for and thinking about a future we can't even imagine," he says, "but one that, in all probability, will at least have a similar level of campus growth as we've seen in the last 50 years.

"We're always trying to keep in touch with what our needs are, what our dreams and visions are, all over the campus. But it is not as simple as writing it down in a list; even the map is more of a puzzle with movable pieces. ... These plans look solid, but they're not set in stone. The value of the master planning exercise every few years is that we have a strategy moving forward, and we have the pieces in our head so that if an opportunity arises, we're prepared."