The ties that bind

There's a reason that Baylor Homecoming is one of the nation's largest celebrations of its kind.

Bears of all ages remain connected to Baylor long after graduation. In a national survey of Baylor alumni conducted last fall, 83 percent of alums said they felt a strong bond or connection to their alma mater, and almost two-thirds of those said that bond has gotten stronger in the years since graduation.

The recently adopted Pro Futuris strategic vision recognizes the need to engage the entire Baylor community. Just as with any family, that connection -- between Baylor alumni and their university -- can take many different forms.

Participation in Baylor events all over the country (organized by staff and volunteers of the Baylor Alumni Network) is at an all-time high. From email and Facebook to Twitter and Instagram, more Bears than ever are in regular (even daily) communication with the university. And two of the most successful fundraising efforts in Baylor history (the President's Scholarship Initiative and Baylor Stadium) recently hit significant goals, thanks to you. And that's just for starters.

In the national survey mentioned above, 88 percent of Baylor alumni also said it is important that Baylor provide opportunities for alumni to gather in locations across the nation.

To that end, the Baylor Alumni Network holds nearly 1,000 events a year in cities all over the country. Bears gather in cities from Albuquerque and Austin to Washington, D.C., and Wichita Falls for business networking and big-game watch parties, holiday get-togethers, and to hear guest speakers (including prominent Bears all the way up to Baylor President Ken Starr).

"I have had the privilege of officially representing the university in our outreach efforts to alumni, parents, donors and friends since 2010," says Tommye Lou Davis, BA '66, MS '68, a longtime Baylor professor and administrator who now serves as vice president for constituent engagement. "As I have attended Baylor Alumni Network events across the country, it has become incredibly clear that the Baylor family is always eager to hear from and connect with the university in meaningful ways."

In the last year alone, the Network's 845 events across 140 cities in 26 states (plus Washington, D.C.) drew more than 36,000 attendees. The vast majority of Network events were in Texas, of course, but nine other states -- Arizona, California, Colorado, Illinois, New York, Oklahoma, Tennessee, Virginia and Washington -- averaged at least one event a month. 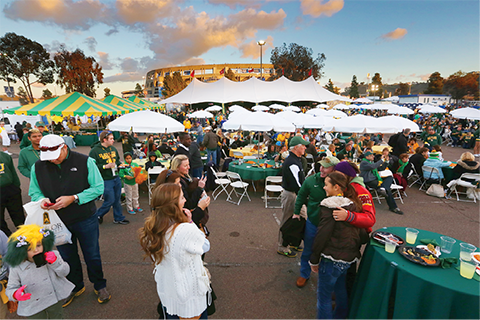 Those events were facilitated by a full-time staff of fewer than 20 people -- bolstered by an army of 600 volunteers, who give of their time and energy to bring Baylor to Bears scattered all over the nation.

"Our small but committed staff is blessed to work with so many dedicated volunteers who assist in many different ways to help us bring Baylor to their local communities," says Davis. "But we are always looking for more help."

To learn more about being a part of Baylor's outreach efforts, or to make sure you are receiving e-mail invitations to Baylor events in your area, please contact the Baylor Alumni Network by e-mail (BaylorAlumniNetwork@baylor.edu) or by phone (254-710-8300).

Even just a few years ago, many alumni only heard from the university the four times a year that Baylor Magazine arrived in mailboxes, plus perhaps an annual phone call from students asking for money.

Today, intentional efforts at better communication, coupled with new tools like Facebook and Twitter, allow alumni the world over to hear from Baylor as often as they'd like -- and to communicate back just as easily.

On any given day, those who are interested could see 3 to 5 posts from Baylor's official Facebook page, 4 to 6 tweets each from @BaylorProud and @Baylor, 3 to 5 snapshots of campus life on Instagram, and 4 to 8 ideas for green-and-gold home decor, gameday fashion and more on Pinterest.

That might sound like a lot... And it is. But fans can easily pick and choose which tools they prefer, and nearly 4 in 5 Bears say they receive just the right amount of communications from Baylor.

The number of followers Baylor has attracted in each of those social media tools illustrates this connectedness. The university has more than 115,000 followers on Facebook, 11,000-plus on Twitter for @BaylorProud (and another 8,500-plus for @Baylor), almost 8,000 on Instagram and more than 2,500 on Pinterest.

Then, of course, there are the more traditional means of communication. A quarterly email from President Starr reaches nearly 100,000 alumni, and Baylor Proud emails go out several times a month to a similar number of Bears. After a decade of growth, Baylor Magazine is now mailed quarterly to more than 140,000 alumni, parents and other friends of the university.

And each and every one of those communications tools is a two-way street. On Facebook, comments attached to each post often begin discussions between alumni about shared memories or points of pride. Twitter is built for responses, and many comments from the Baylor family are retweeted so that they are shared with the whole community.

On Instagram, Baylor posts not only its own photos but also great images taken by students and alumni. Pinterest as a community is all about sharing what you find interesting; followers repin Baylor Proud's items, and Baylor Proud repins items it likes from other people.

The Baylor Proud blog and email together solicit story suggestions via either email responses or an online form, and Baylor Magazine is glad to read and run letters to the editor.

President Starr announced in April that the President's Scholarship Initiative, launched just three months after he took office, has topped its goal of raising $100 million for student scholarships.

"When we issued the call, we were simply transmitting a message that we received from you, the students," Starr said to a crowd gathered in Barfield Drawing Room. "We received it loud and clear, and that message was: 'We need help.'

"I want to say thank you to Baylor Nation; even some of the students here have given what they can," he continued. "This was the effort of the entire community coming together."

More than 12,000 people contributed to the scholarship drive -- almost half of them giving to Baylor for the first time in their lives. The vast majority of those who gave to the initiative -- 86 percent -- gave less than $1,000, a textbook illustration of the fact that every gift counts, as it all added up to the largest scholarship push in Baylor's history.

At the same time, Baylor was working to capitalize on the excitement surrounding Baylor football to build the Bears a long-hoped-for new home back on campus. Less than eight months after Robert Griffin III brought the Heisman Trophy back to Waco, construction was underway on Baylor Stadium at the intersection of Interstate 35 and the Brazos River.

The $250 million facility is rising thanks to a variety of funding sources, including a $35 million contribution from the City of Waco and approximately $100 million in bonds that will be paid off by athletic revenues (which stand to grow significantly thanks to the Big 12 Conference's new television contracts).

But the path was paved to move from dream to reality by leadership gifts from generous, prominent alumni. Drayton McLane Jr., BBA '58, and his family launched the project with the largest capital gift in Baylor history; that move was followed by contributions from John Eddie Williams, BBA '76, JD '78, (one of the five largest capital gifts in university history) and Sheila and Walter Umphrey, BBA '59, JD '65 (one of the top five gifts in Baylor Athletics history).

Other stadium donors soon followed: Clifton, BBA '63, and Betsy, BA '71, Robinson; Jim, BBA '69, and Julie, BA '67, MS '68, Turner and Baylor Health Care System; and Bob, BBA '70, MBA '71, and Janice Simpson. Their transformational support of the project was vital in returning Baylor football and the gameday experience to campus for the first time in almost 80 years.

Then in May, the university received a $35 million gift from Paul, BBA '79, and Alejandra Foster -- the largest gift from a living alumnus in university history to support the stadium and a new business school facility, which will be named the Paul L. Foster Campus for Business and Innovation. That gift (and others expected to follow) will provide for the $100 million facility which is to be built along Bagby Avenue between 3rd and 4th streets.

All told, the university will have raised nearly $300 million in private support for these three priorities alone in approximately three years, to say nothing of gifts that have come in to support other efforts over that time.

Over the last 12 months, Baylor fans' increased support has also shown up in other areas.

Attendance at Baylor sporting events is booming. Two of the top three total and average attendance numbers in Floyd Casey Stadium history have been set in the last two years, and both men's and women's basketball have set season and single-game attendance records over the past three years.

Buoyed by success on the field and court and a more aggressive distribution strategy, the last year has brought Baylor the two largest licensing checks in history. In fact, each of the last six quarters has seen Baylor's licensing royalties top $115,000. Those numbers reflect the increasing desire of longtime Baylor fans to "fling their green and gold," coupled with a rise in new Bear fans across the state and nation.

Even some of Baylor's most prominent alumni, who could certainly be understood to be too busy for such things, have been glad to use their notoriety to give Baylor a boost.

The project required a tight turnaround, but every one of them responded quickly -- and affirmatively -- to support their alma mater.

This is all good news, but there's always room to grow -- more alumni events that reach more people in more cities; new communications tools that open additional avenues for conversation across the Baylor family; and more financial support for projects that pave the way for our students in the generations to come.