To lead and to serve

Baylor's purpose is clearly set forth in its mission statement: 'to educate men and women for worldwide leadership and service by integrating academic excellence and Christian commitment within a caring community.'

But what does that look like when put into action? In this issue in particular, we have the privilege of sharing a variety of stories that demonstrate how Baylor is working to fulfill its purpose.

For years, Baylor's School of Education has had a strong reputation for the quality of teachers it produces. But School of Ed graduates aren't only found in the classroom; in 'Making the grade,' we show how School of Ed alumni are impacting the entire field of education. Examples include not only a lifelong elementary teacher, but also an award-winning superintendent, a med school assistant dean, and a grad who founded a university in Thailand based largely on what he experienced here at Baylor.

In recent years, the entrepreneurship program in Baylor's Hankamer School of Business has garnered attention as one of the university's top offerings, ranking in the top five nationally four years running. Many of the accolades are for the distinctive, hands-on approach the program takes, integrating active classrooms and real-world experiences as students have the opportunity to plan, pitch and launch actual businesses with financial and logistical support. Read more about the program here.

Baylor has never been more focused on service, particularly that which uses the university's expertise and resources to address our society's challenges. The Texas Hunger Initiative (THI), a collaborative program within Baylor's School of Social Work, is one thriving example of such an effort. Led by Baylor graduate Jeremy Everett, MDiv '01, THI has taken enormous strides in its short four years of existence as it aims to better use resources already in place (both public and private) to reduce hunger across Texas - in the process, creating a plan that can be easily replicated in other states to help feed those in need all over the country. Read about their challenges, successes and expanding efforts starting here.

Finally, we take time to honor an alum who not only influenced the world of banking and media, but who also contributed significantly to the Baylor world as well. Moody Memorial Library, Castellaw Communications Center, the longtime home of Baylor presidents, and other Baylor facilities and programs would not exist in their current forms without the generosity and leadership of Joe Allbritton, LLB '49. 'Remembering Joe' shares highlights from his extraordinary life and career and looks at some of the ways he helped changed the face of Baylor. 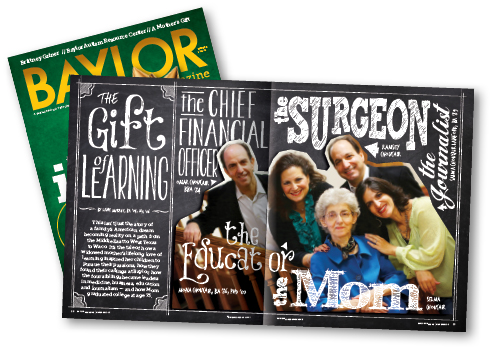 What a great article, 'The Gift of Learning' about the Choucair family from Munday, Texas. I grew up in Munday (five years older than Ramsey Choucair, the oldest brother) and oversaw most of these kids at the swimming pool where I worked. Our family had great respect for Joe and The Fair Store, a classic small-town store that is unforgettable in my memories growing up there. Great family, and Joe would indeed be very happy and proud.

As a mom of two Baylor grads, I read Baylor Magazine. I take issue with the letter written by Stephen Guittard in the [Winter 2012-13] magazine received today.

First of all, Billy Graham was called by God to evangelize, but yet he has in many ways been supportive of civil rights, both in the U.S. and South Africa. He was the first evangelist holding a crusade in the South (Chattanooga) to cut the ropes of separation between blacks and whites.

He also made bail for Martin Luther King Jr. when he was in jail in New York and invited him to speak at the N.Y. rally in 1957. King advised him NOT to be involved in the civil rights battle, but to stick to his "calling."

In 1995, at the request of Warden Burl Cain, New Orleans Baptist Theological Seminary made one of the riskiest decisions in its history. We began an extension center to train inmates in the Louisiana State Penitentiary at Angola. It was the largest maximum-security prison in the nation, the largest collection of violent people in the nation, and the bloodiest prison in America.

To our knowledge such a program was without precedent in theological education. Our greatest risk became one of our greatest rewards. What God is doing in, with, and through the lives of the inmates we have trained defies my descriptive abilities, inspiring us to do similar programs in three other maximum security prisons.

Our programs were the basis on which Southwestern Seminary began the program referred in your article on "Maximum Security Seminary" (Winter 2012-13). Imagine my surprise when that article failed to mention the Angola program was an extension of New Orleans Baptist Theological Seminary. As a Baylor alumnus, my disappointment was even greater. Some of your readers might have been interested to know of the Baylor connection to this amazing story.

Nothing, however, can keep us from rejoicing in what God is doing through these prison programs. We were thrilled when Southwestern took up this torch in Texas. Other efforts are now being made in other places. Over the years of our inmate training programs I have been reminded again and again of God's power to transform any human life. The risk that looked so immense at the time became one of our greatest blessings.

I wanted to share a great story of Baylor pride that I experienced in San Diego at this year's bowl game. Our family had planned on attending and reached out to a friend of mine's son, from San Antonio, who is stationed in San Diego with the U.S. Navy. We made loose plans to get together as he did not yet know his duty schedule for that week.

On game day, he and his wife were able to meet us at the pre-game tailgate at the last minute, but due to his unknown duty schedule, we had not purchased tickets for Seth and his wife Shelby to go into the game. When they were indeed able to come, I walked around the Baylor tailgate asking different tables if anyone had extra tickets to sell and giving the short version of who I was trying to buy tickets for.

Two separate Baylor supporters handed me a ticket and wanted no financial consideration. In both instances, the individuals indicated that I please "thank him for his service." I do not know the name of the first gentleman that gave me a ticket, but the second was Walter Abercrombie, the executive director of the "B" Association.

Thanks again to these generous Baylor fans.