Ten years ago this month, the first issue of Baylor Magazine was delivered to Baylor alumni, parents of current students, and friends and supporters of this great university. The mission of the magazine was to engage alumni and friends in the life of the university by communicating Baylor's aspirations and accomplishments to the Baylor family. The first issue of the magazine also featured an introduction to the exciting new vision, Baylor 2012, launched earlier that same year.

Baylor 2012 was a detailed and far-reaching endeavor that sought to propel Baylor to a unique leadership position in higher education, combining world-class academics with an authentic commitment to its Christian faith and Baptist heritage.

The plan set forth a framework of guiding convictions seeking to:

In this issue, we provide a look at the university today, in the year 2012, after a decade of remarkable progress. We look specifically at key areas of university life which have seen perhaps the greatest transformation over the past 10 years: academic opportunities, student living and learning on campus, athletic achievements, and alumni engagement. On page 42, you will find a map of campus highlighting the brick-and-mortar growth Baylor has experienced due in large part to Baylor 2012.

We also sat down with President Ken Starr to talk about the university's new strategic vision, Pro Futuris. Propelled by the successes of the past decade, the core convictions of Baylor 2012 listed above are also part of the new vision developed over the last two years with a broad base of constituent support from faculty, staff, students, alumni, parents and friends.

It is fitting that we celebrate 10 years of success and progress with a look at the most successful athletic year in Baylor history, one that has been widely dubbed the "Year of the Bear." In this issue you will find a page or two (or 10) highlighting some of the successes of the year, from the Heisman to a pair of national championships. Sic 'em, Bears! 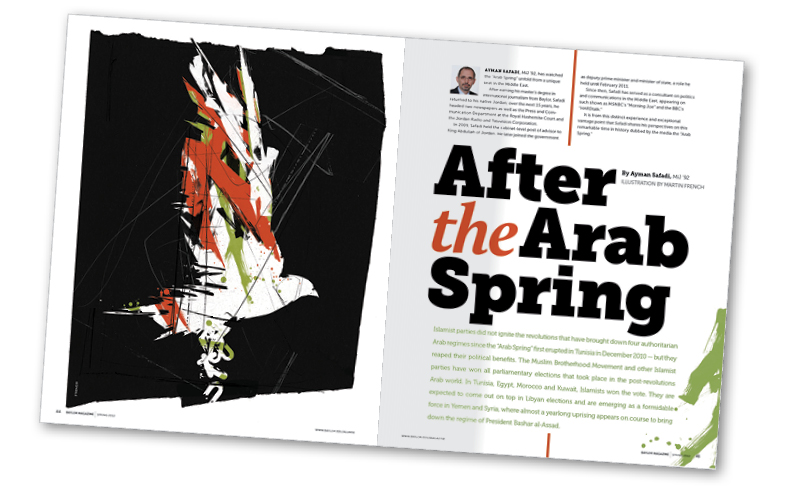 Editors Note: In the last issue, Ayman Safadi, MIJ '92, shared his perspectives on the ongoing conflicts in the Middle East in a piece titled "After the Arab Spring." While his comments do not reflect any official political stance by the university, they did draw strong comments from a number of our readers. Below are representative samples of those received, edited slightly to fit space.

As a proud Baylor grad, please let me express directly to you my deep concern about the latest Baylor Magazine devoting six full pages to the "Arab Spring" article which concludes in traditional Islamist condemnation of Israel - America's strong ally and the only true democracy in the always-troubled Middle East. What on earth convinced Baylor, the world's largest and finest Christian University, to let its good name provide a showcase for the anti-Christian Muslim Brotherhood and Islamist view of more ongoing violence in the Middle East? We get more than enough of this Islamist violence and chaos on the daily television news. Baylor University, in my opinion, need not join this fray. Other Baylor exes share my view.

While the author (Baylor degree in hand) boasts of the Muslim Brotherhood's "strong religious appeal" and "effective ability to mobilize followers in ways no other political forces could", he fails to mention their 70 off-shoot terrorist organizations operating throughout the world, including Hamas and Hezbollah. The Muslim Brotherhood, which advocates Islamic world domination, states: "Allah is our objective. The Prophet is our leader. Koran is our law. Jihad is our way. Dying in the way of Allah is our highest hope."

This greatly out-of-place article does nothing but highlight the continual, violent Islamist mess in the Middle East - and further Islamist condemnation of Israel - the Jewish homeland.

Baylor has provided an enhancing, great and meaningful compass in my life for which I'm most thankful. Plus I met and married my Baylor sweetheart Sandra Vick there 50 years ago this year!

I commend Mr. Safadi for all the wonderful things he has done since graduating from Baylor. In regard to his article "After the Arab Spring" unfortunately he has left out quite a few major facts. He wrongly blames Israel for the Palestinian-Israeli conflict and further blames Israel for brushing aside the Arab peace initiative they supposedly offered during the Madrid conference of 1991. In reply to his statements let me remind everyone of the following, which can easily be verified via the Internet.

In 1947 the United Nations proposed a plan dividing the disputed land into two parts, one part for the Jews and one part for the Arabs. The Jews accepted the plan and in 1948 the State of Israel was born. The Arabs rejected the plan and chose to attack Israel instead, not one time, but seven different times between 1948 and 2006, not counting daily rocket attacks from Gaza and other terrorist activity.

In July 2000, President Clinton convened a Peace Summit at Camp David between Palestinian leader Yasser Arafat and Israeli Prime Minister Ehud Barak at which Arafat was offered approximately 95 percent of the West Bank and Gaza Strip, as well as Palestinian sovereignty over East Jerusalem. Arafat turned it down. The world was stunned!

The Madrid Peace Proposal Mr. Safadi says Israel brushed aside took place in October 1991. He makes no mention of the Camp David Summit rejected by Arafat in 2000, nor the refusal of the Arabs to accept the United Nations partition of 1947.

On October 28, 2011, Palestinian President Mahmoud Abbas said in an interview on Israeli Television that the Arab world made a mistake rejecting the United Nations' 1947 plan to partition Palestine into a Palestinian and a Jewish state.

So, what has been the result of this mistake by the Arabs? They have been living in United Nations refugee camps for 65 years. There are a total of 58 camps in Jordan, Syria, Lebanon, the West Bank and Gaza. In 1950 there were approximately 900,000 people in these camps. Today, it is close to 5 million mainly due to Arab births.

The United Nations has created The United Nations Relief and Works Agency for Palestine Refugees, which according to their own web site, currently has 28,909 people working in these camps taking care of the refugees. (Funding for these camps is a whole different matter, which I don't have time to get into now).

In addition to living in these camps the Palestinians still have no state or country of their own, and their poverty and unemployment rates are astronomical. On the other hand, Israel has become probably the most highly educated and technologically advanced nation on the planet.

If the Arabs had just accepted the United Nations Partition in 1947, like the Jews did, just think how much more Israel and its Arab neighbors could have accomplished and how many lives could have been saved with both sides living in peace!

I have in my lap a copy of Baylor Magazine dated Fall 2009. It brings to mind my days at Baylor U. I was only there one year as I left to get married. It was during a time of war, and the man I met was working in the Houston shipyard. However, I always have been proud of that one year at Baylor. I am grateful God has let me live so long and with good health and a wonderful family and many friends. Thank you for the memories I have and thank you for the wonderful college that helps so many people in so many ways.