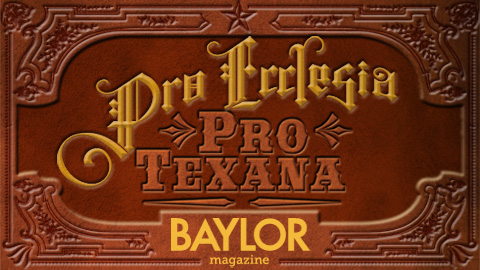 Pro Ecclesia, Pro Texana. That has long been the proud motto of this great university, prominently emblazoned at the center of the seal and eloquently expressed by countless presidents, faculty and even students. It speaks to the core of who we are at Baylor.

It answers some key questions: Why do students come to study? Why do they desire to learn? Why do our faculty labor to teach or research to discover? Why do so many on this campus serve selflessly day in and day out?

The answer is Pro Ecclesia, Pro Texana. For Church, For Texas. Broadly applied, that means everything done at Baylor is to be in the service of God and his church, and for the benefit of our neighbors in the world. Certainly our founders drew their inspiration for this motto from the Greatest and second commandment of our Lord. The ultimate motto and motivation in life is to first love God with all that we are and our neighbors as ourselves (Pro Ecclesia, Pro Texana).

It's a great motto that deserves frequent reflection, and not just when waxing nostalgic about college days. Is it still a motto for your life? Are we still living lives that are Pro Ecclesia, Pro Texana -- for God, and for neighbor? I hope that we are.

Baylor's Institute for Studies of Religion (ISR) recently celebrated some of that rich Pro Ecclesia heritage. In April, ISR hosted some of the greatest Biblical scholars of our day for a conference reflecting on the King James Bible and the world that it made. Marking the 400th anniversary of the translation, Dr. Philip Jenkins contributes to this issue of the magazine describing for us the monumental impact the King James Bible has had on the development of the language, culture and faith of the English-speaking world (How the King James Bible changed the world).

On the Pro Texana front, this year marks 175 years of Texas' independence from Mexico. Baylor is always eager to celebrate its rich history and in this issue we also offer our observations on Baylor's many contributions to the earliest days of this great state (175 Years of Independence).

June is the anniversary of another significant event in Baylor's history: Kenneth Winston Starr began his official duties as President June 1, 2010. The year that followed has been filled with opportunities to meet, hear, engage, strengthen and expand the Baylor family (The First Year).

Finally, we take the opportunity in this issue to introduce you to some freshly minted alumni, from the class of 2011, among them a star athlete, a student leader, a gifted trumpeteer and a future surgeon (Faces of Baylor). In each of them you will find individuals who have taken the university's motto to heart. Whatever is next in life, I am confident they will pursue it Pro Ecclesia, Pro Texana.