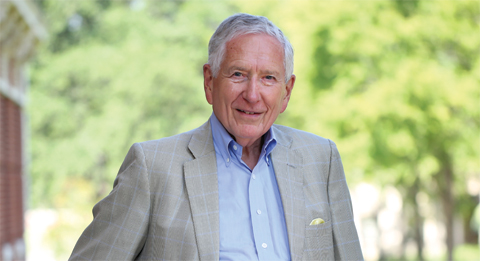 The McLane Baylor legacy began in 1954 when Drayton McLane came to Baylor from the small town of Cameron, Texas. Drayton found the bustle of Waco exciting and made friends at Baylor who came from around the nation. Drayton also found professors who took a personal interest in his future and helped shape the businessman he would become. Drayton joined his family's grocery business and quickly moved into management. After his father's retirement, Drayton became CEO of his family's enterprise. Under his visionary leadership and strategic entrepreneurship, the family business grew into a highly successful corporation with a multitude of related businesses.

A faithful supporter of his alma mater, Drayton's first major gift to Baylor was inspired by the fond memory of bells tolling as he walked across campus as a student. When he learned the carillon had fallen into disrepair, he took action, providing the funds to replace them and bring the tolling bells back to campus. Many gifts have followed... student scholarships, academic needs, athletics, Truett Seminary and a favorite gathering place for students on campus, the McLane Student Life Center. The McLane family's Baylor roots run deep, with Drayton's sons Drayton the third and Denton following in their father's Baylor footsteps. And the McLane family's unwavering support for their university became clear to all when Baylor announced the McLane family would use the naming rights associated with their historic gift to name our new on-campus stadium, Baylor Stadium. As Stadium Founders the McLane family launched a new era in Baylor Football transforming the game-day experience and igniting an economic engine for the entire region. Drayton, we honor your lifetime of service to Baylor and thank you for your steadfast support for our students and our limitless future.