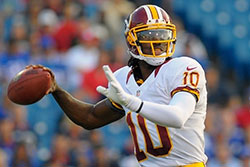 At 23 years of age, Robert Griffin III has already had a distinguished career that has brought honor to Baylor University.

Since stepping onto Baylor's campus at just 17 years old, the quintessential student athlete has made the unbelievable, believable. Robert's name will forever be etched in Baylor lore as a primary figure in Baylor's legendary Year of the Bear and first-ever Heisman Trophy winner. A 2010 graduate who majored in political science, Robert left Baylor for the National Football League lacking only a completed thesis to earn his master's degree in communications.

The second overall 2012 NFL draft pick promptly was voted a team captain before leading his Washington Redskins to their first NFC East Championship since 1999. Robert was named NFL Offensive Rookie of the Year and became one of only two rookie quarterbacks ever named to an original Pro Bowl roster.

Off the field, Robert became a spokesman for several of the world's most popular brands, appeared on the covers of dozens of magazines, and has been the subject of two biographies and a documentary. But more than his individual accomplishments and professional successes, Robert's influence and continued support for his university have introduced Baylor to new audiences across the nation. From attending Baylor sporting events and bringing his Redskins teammates to Baylor's campus, to vigorously supporting Baylor before his 1 million Twitter followers and 455,000 Facebook followers, Robert's love for and commitment to Baylor is clear.

In a sports world where athletes often make headlines for questionable choices off the field, Robert's faith, character, and work ethic make him an inspirational role model for the young and old. Thank you, Robert, for giving Baylor Nation and countless others so many reasons to believe.