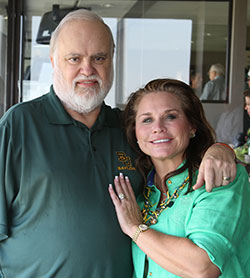 Bob Simpson says Baylor University is woven into the fiber of his being. Out of his Baylor experience came a fierce love for Baylor that has followed him his whole life. It was during his Baylor years that Bob discovered his passion for business. He recalls going to Moody Library and reading The Wall Street Journal before he'd start his homework and says that for him it was like eating his ice cream before dinner.

Bob has consistently supported his alma mater in many ways, most recently through his generous gifts to support construction of the Simpson Athletics and Academic Center and stepping up as a Baylor Stadium Founder. He has been a guest speaker for the Baylor Business Network, is a member of the Endowed Scholarship Society, having established three scholarships (one in memory of his brother, Ken), and is a member of the 1845 Society. But Bob says he still identifies with the little kid from Cisco who managed to go to Baylor, who worked for Arthur Andersen on the Rangers account and ended up with a dream fulfilled by becoming part of the Texas Rangers organization. He believes it's a testimony to all you can do in America and when you have a strong educational foundation, like the one he got at Baylor. 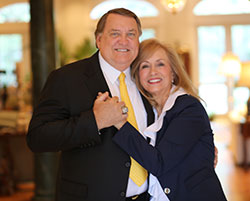 Jim and Julie Turner say they would not be who they are today without Baylor. The Dallas couple has made the place where they met a vital part of their lives. Julie Hermansen Turner loved athletics and after taking the advice of a beloved professor, earned her master's in Physical Education in 1968 - a time when women in sports was not commonplace. Julie taught at Baylor for 2 years and spent 12 years at San Jacinto College. She marvels at the success of women's sports today and takes great pride in the accomplishments of the Baylor women's athletics programs. Jim Turner came to Baylor from Houston, majored in business and was a standout on the basketball court. Before graduating in 1969, Jim was an All-Southwest Conference and All Academic Team selection. Jim still holds the single-game freshman scoring record and ranks in Baylor's top 10 for average points scored in a season.

The Turners have a legacy of generous support for Baylor. Their love for Baylor athletics is evident in their support for the Turner Riverfront Complex and multiple Baylor athletic programs. Julie has been an active member of the Baylor University Women's Council and received Baylor's Woman of Distinction award. The Turners are members of Baylor's Medallion Fellowship, the Judge R.E.B Baylor Society and are Baylor Stadium Founders. Jim has also received the Herbert Reynolds Service Award and has been named to the Athletics Hall of Fame and the Athletics Wall of Honor.

Read more about Jim and Julie Turner in Baylor Magazine