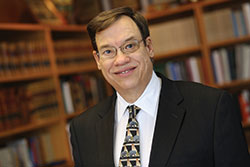 Former Texas Supreme Court Chief Justice Tom Phillips has made a career of making good decisions. Besides choosing to attend Baylor over Texas A&M, marrying the daughter of two Baylor grads, and leading a judicial reform movement at the state level, he was also the first to approach Judge Ken Starr about becoming Baylor's 14th president. As a student at Baylor, Tom was a member of Circle K (now ATO) and a charter member of Student Foundation � both experiences he credits for helping him come out of his shell. After graduating in 1975, Tom earned his Law degree from Harvard and served as a judicial clerk, a role that sparked his ambition to become a judge. After six years of law practice in Houston, Gov. Bill Clements appointed Tom judge of a newly created civil district court in Harris County. Tom aspired to the Texas Supreme Court and soon became the youngest chief justice in the nation and president of the National Conference of Chief Justices. He served as Chief Justice from 1988 through 2004, retiring from the courts to return to private practice. Tom's tenure on the supreme court reflects a unwavering commitment to excellence. He is credited with reforms that led to campaign contribution limits, broad-based modernization of the Texas judicial system, improved access to legal services for the poor, and strengthened regulations governing legal and judicial ethics. Among his many honors, Tom was awarded the Price Daniel Distinguished Public Service Award in 2004 and was named to Baylor's Presidential Search Advisory Committee in 2009. He continues active involvement in his profession, serving as a member of the American Law Institute, trustee for The Center for American and International Law, a mentor for young lawyers and a partner in the Austin firm Baker Botts.

Honoring achievement in the public or non-profit sector that furthers the mission of Baylor, the Pro Texana Medal of Service is awarded to Thomas R. Phillips.