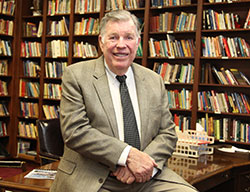 Led to Baylor because he felt a call to the ministry, Bill Glass turned his football success into a platform to share Christ's love in a hurting world. Bill contributed to some of Baylor football's greatest successes in history including a Sugar Bowl victory and the second-highest final AP ranking ever. Bill became a unanimous all-American and, along with Dr. Bill Bright, established Baylor's chapter of Campus Crusade for Christ. Here he also met his wife of 57 years, Mavis Knapp. A first-round NFL draft pick, the 1957 Baylor grad became a four-time Pro Bowler and a World Champion playing for the Cleveland Browns. As a professional athlete, Bill recognized his on-field success provided him a platform from which to speak about his faith off the field. In 1963 he earned a degree from Southwestern Baptist Theological Seminary. In 1965 Bill gave his testimony at the first nationally televised Billy Graham Crusade. After the event, Graham convinced Bill to pursue evangelism as his life's calling. When he retired from football in 1969, Bill formally began a citywide evangelism ministry, Champions for Life, and for more than four decades, the innovative organization has shared Christ through testimonies of star athletes and volunteers in thousands of venues, including hundreds of prisons each year. Bill has authored a dozen books, is a member of the College Football Hall of Fame, and was inducted into the Texas Sports Hall of Fame. Through it all, Bill has been proud to be part of the Baylor family. He served on the Board of Regents for nine years, and all three of his children and three grandchildren have attended Baylor.

Recognizing contributions to Christian ministry with eternal impact on the lives of those to whom he so powerfully ministers, Congratulations Bill Glass, recipient of Baylor University's Pro Ecclesia Medal of Service.