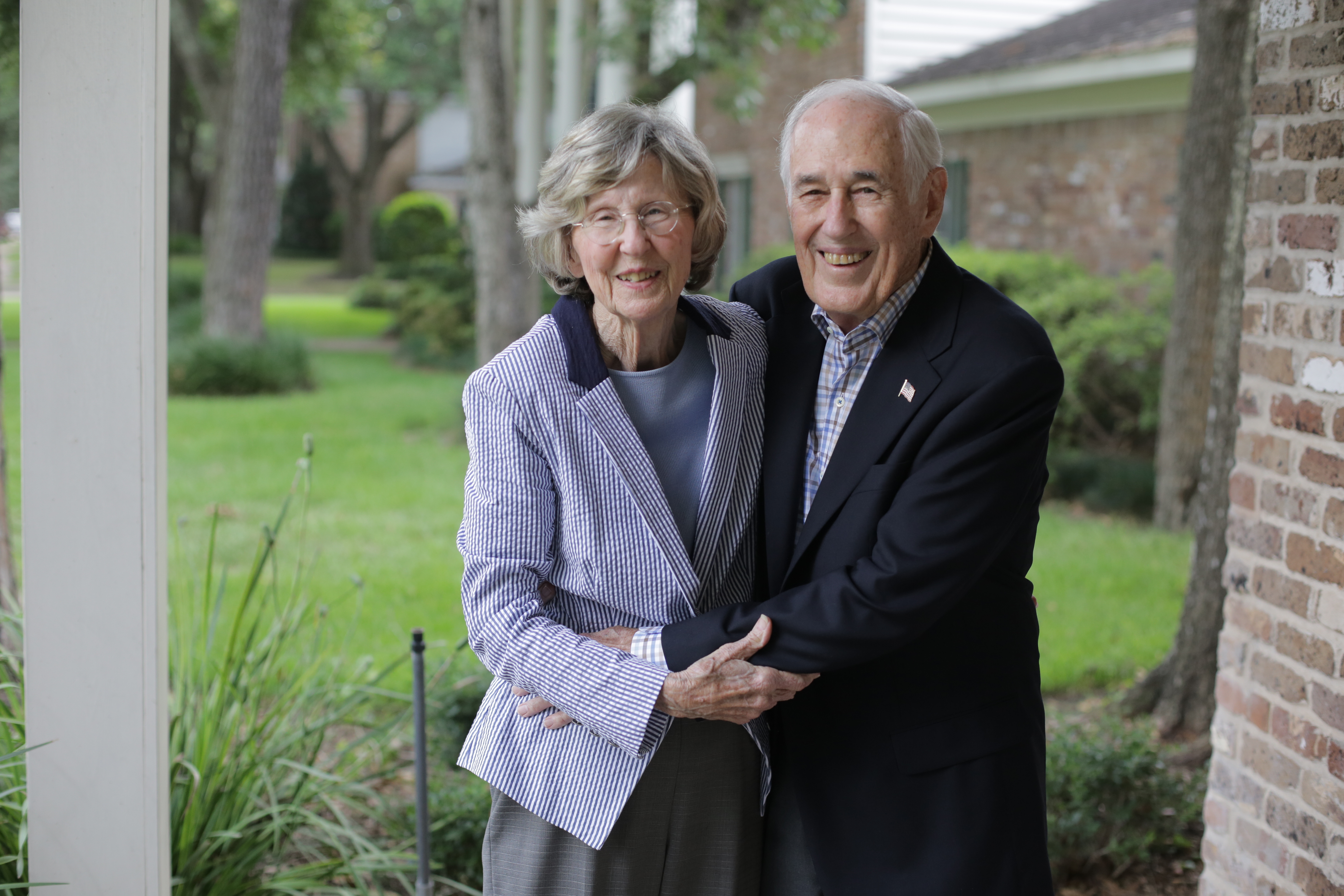 Matt Miller, BBA '57, was a senior at Waco High School in 1953, the year that his father died and months later an F5-category tornado ravaged the city, claiming the life of a classmate. As the City of Waco rebuilt, so too did Matt’s family. His father’s boss helped Matt’s mother get a job to provide for her three children, and Matt suspects the same gentleman also facilitated the baseball scholarship that allowed him to attend Baylor that fall.

A three-year baseball letterman while at Baylor, Matt had turned down offers from the University of Texas at Austin and Rice University, as well as an offer to play professionally. After earning his accounting degree, he went on to a brilliant business career that included leadership roles with Coca-Cola and Proctor & Gamble.

Alongside Matt for most of that journey has been his wife, Dot, BBA '57, a native of Walnut Springs, Texas. They met while students at Baylor, where she worked in the registrars office. Their courtship began after graduation, while Matt was stationed in the Army at Fort Chaffee in Arkansas, and they wed in 1959. Dot encouraged Matt to complete his certified public accountant exam during their first year of marriage while he was working for Ernst and Ernst.

By his late 20s, Matt was executive vice president of finance and administration at Duncan Foods Company, best known as the manufacturer of Maryland Club Coffee. When Duncan Foods became a Coca-Cola subsidiary, he became chief financial officer and later served as Coca-Cola's director of corporate real estate. After 26 years with Coca-Cola and its subsidiaries, Matt returned to Houston as senior vice president of finance and administration of Maryland Club Foods Inc.

As soon as they were able, the couple began to give back to the school that had provided a kick-start to Matt's successful career. They established the James Abernathy Endowed Scholarship in the Hankamer School of Business, named for Dot's late brother. The Millers' gifts also provided for a new clubhouse and lights for Baylor's baseball program. Perhaps their most lasting contribution to Baylor Athletics is Baylor Ballpark, of which they are among nine founding donors.

Matt retired in the early 1990’s and has since been an active investor, community volunteer and business mentor in Houston. 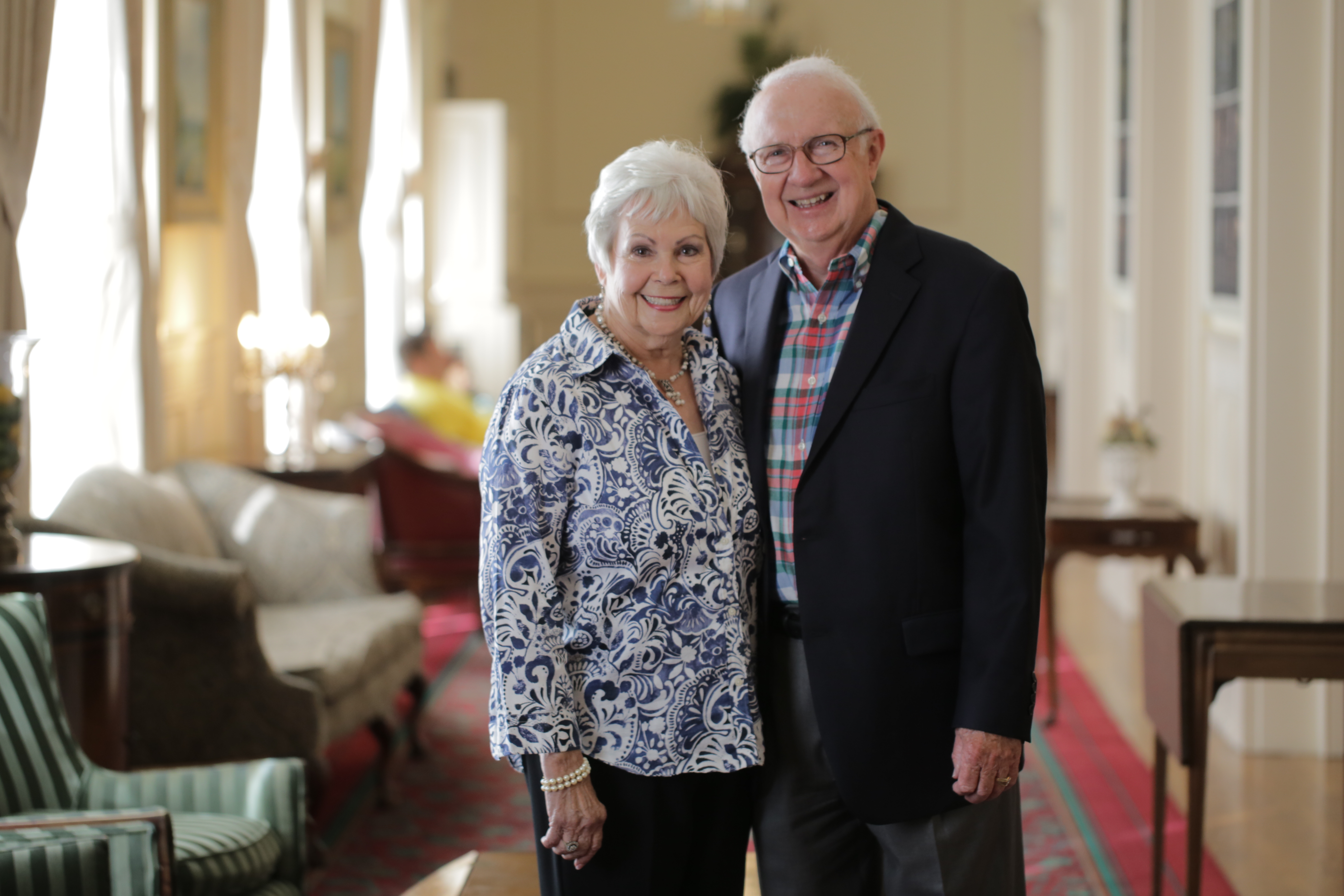 David, BA ’60, and Shirley Lake seek to mold the joyful and painful moments of their lives into blessings for others. For them, that’s what “living life to the fullest” means.

Through The David and Shirley Lake Endowed Scholarship Fund, the couple provides a tangible blessing to students in need. They empathize with families’ struggles to afford higher education. At one point, all four of their children—Joel BA ’92, JD ’06; Jonathan, BBA ’93; Kyle, BA ’94; MDiv ’97; and Kristi Lake Fuller, BA ’95, MSG ’96—attended Baylor at the same time.

The Lakes have experienced countless joys in life since David’s Baylor roommate set them up on a blind date nearly 50 years ago. In addition to their children, who collectively earned seven Baylor degrees, they have 14 grandchildren who they bring to games and are lobbying to attend Baylor someday. Many of their lifelong friends are a part of the Baylor family.

They also have known great heartache. Their son Kyle, a beloved pastor at University Baptist Church in Waco, died while preparing to baptize a believer in 2005. Following the devastating loss, the couple felt the embrace of the Baylor family and a deepening sense of the calling on their lives. A decade later, Kyle’s weekly benediction, “Love God, embrace beauty and live life to the fullest,” still resonates within their hearts.

In keeping with their desire to steward the most difficult moments for something good, the Lakes have found multiple ways to ensure that Kyle’s legacy lives on in students who benefit from their generosity. Students from Baylor and elsewhere have been blessed by the 66 scholarships awarded by The Kyle Lake Foundation and The Kyle Lake Memorial Endowed Scholarship Fund at George W. Truett Theological Seminary.

The Lakes also established the Kyle Lake Center for Effective Preaching in Truett Seminary. Equipping ministers to communicate the gospel in a meaningful and effective way, as Kyle did, the Center enhances Truett’s capacity to train students for the preaching ministry.

Baylor remains a major presence in the couple’s lives, and their love for all things green and gold continues to advance the Baylor mission in the lives of generations of future students. It’s a legacy that they hope inspires others. 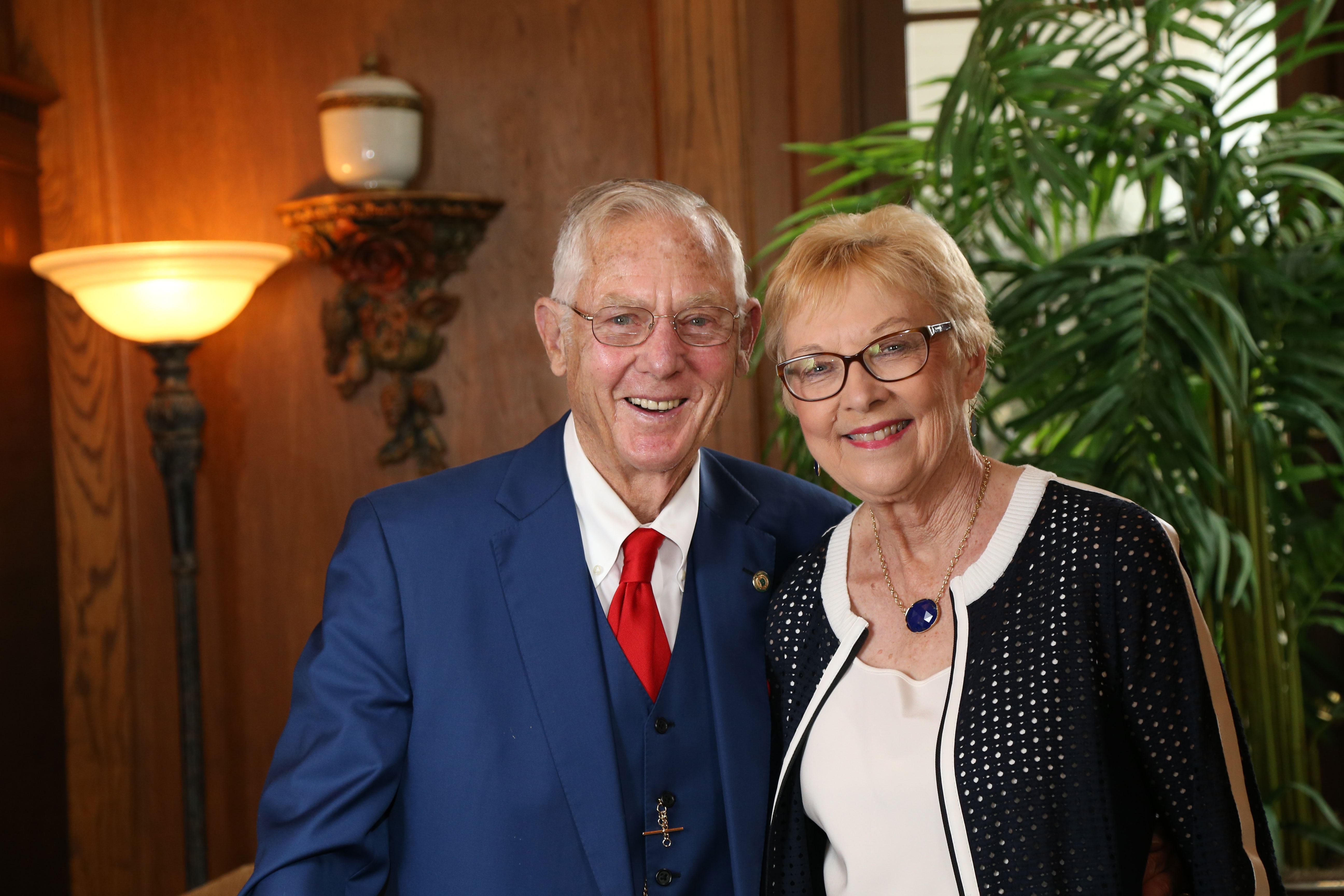 As a young history major, George Chandler, BA ’60, LLB ’62, became spellbound by longtime Baylor history professor Guy B. Harrison’s passion for his subject and his ability to connect through stories. The power of those stories stayed with Chandler as his aspirations changed from teaching history to becoming a lawyer.

For George and his wife Martha, BA ’61, that realization would impact their personal story, and the stories of thousands of clients along the way. When George started his law firm in Lufkin In 1971, he was the city’s first personal trial injury attorney. Over time, he became one of the most renowned trial lawyers in the country, bolstered by his ability to share his clients’ stories in a way that resonated with juries. Chandler, Mathis & Zivley won many of the largest jury verdicts in Texas history in categories such as punitive damages, civil case verdict and defamation.

The roots of the Chandlers’ success can be traced back to Baylor University, where they followed in the footsteps of their parents as Baylor students. George attended Baylor on a tennis scholarship and was named the team’s most valuable player in 1960. Martha came to Baylor to study English and education. She caught George’s attention in a history class, and he asked her out.

Both of their children—daughter Kelly Chandler Michaels, BA ’86, and son Reich, BA ’86, JD ’92—attended Baylor. Reich followed in his father’s footsteps, as a tennis player, matching his father’s on-court accomplishment by winning the team’s most valuable player award, and as a lawyer, practicing law with his father. Reich’s strongest battle however, was not on the tennis court or in the courtroom. Reich battled cancer for 15 months before succumbing to the disease in 2006.

In the Chandlers’ time of grief, the Baylor Family supported them in a number of ways. One that will have a lasting impact on future Baylor students is through The Reich O’Hara Chandler Endowed Memorial Scholarship Fund in Law, which the Chandlers’ friends Walter Umphrey, BBA ’59, JD’ 65, and John Eddie Williams, BBA ’76, JD ’78, established in Reich’s memory. The Chandlers have grown the Chandler Memorial Scholarship many times over since it was established. They also have supported Baylor Law School and the Student Life Tennis Center. 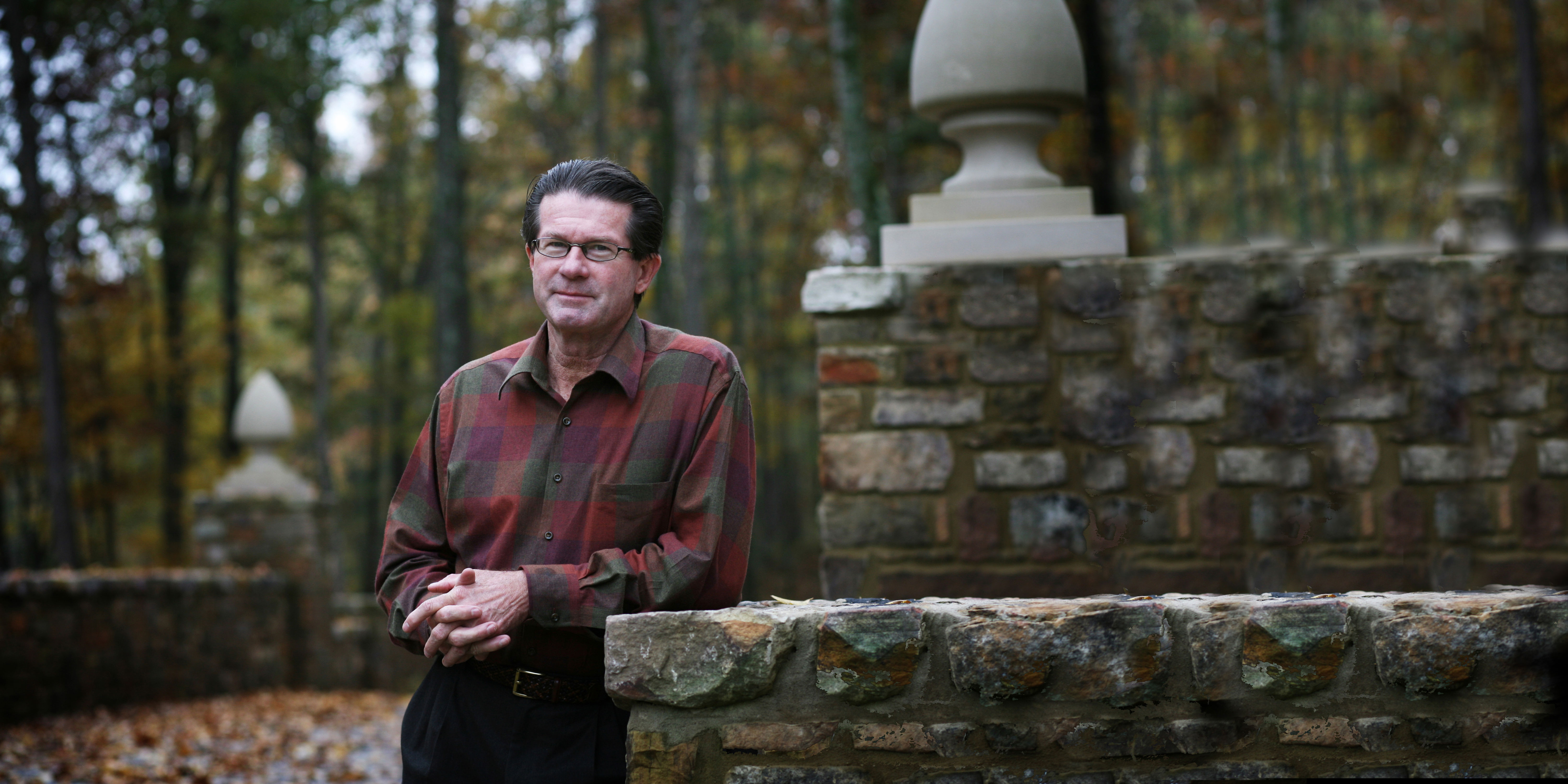 Founder of Olympic Optical, a global leader in the design and production of sunglasses, Memphis native Winston Wolfe, Class of ’64, built a successful career developing innovative products and cultivating niche markets. Retired since 2005 when he sold his company, Wolfe now devotes his time to a variety of philanthropic and civic pursuits.

Wolfe found himself at Baylor due to his athletic ability, the appeal of Texas and a chance meeting with a Baylor student at a Memphis-area church function. The discussion prompted Wolf to pursue track and field at Baylor, where he studied psychology and business. Decades later, his daughter Stephanie, BS ’89, would also become a Baylor Bear.

Upon his return to Memphis after Baylor, Wolfe gained business experience through a bank’s management training program that led to a job with Great Southern Corp., an importer of general merchandise. There, Wolfe discovered his passion for the sunglasses product line he was assigned to manage. His cultivation of that passion would lead to lucrative business.

Wolfe launched Olympic Optical in 1976, importing sunglasses from Italy and Taiwan then selling them to distributors. As the product line expanded to include safety eyewear and hearing protection, he became immersed in product design, for which he holds nine patents. Eventually, with 30 employees and licensed brand names, such as Smith and Wesson and Remington, Olympic Optical merchandise appeared on the shelves of major retailers, including Wal-Mart and Bass Pro Shops.

Sharing his success with Baylor, Wolfe has supported a variety of campus initiatives, including the new Clyde Hart Track and Field Stadium that opened in 2014. His support provided a 6,000-square-foot team facility containing the Winston Wolfe Clubhouse for the track and field program. A consistent supporter of the track program for decades, Wolfe previously provided for a number of improvements, including the clubhouse and the track entrance at the former facility, the Hart-Patterson Track and Field Complex.

He also has endowed and supported entrepreneurship and athletic scholarships and The Winston Wolfe Distinguished Entrepreneur in Residence. He has received the Huckins Medallion from the University and has served on the Hankamer School of Business Board of Advisors. He is a member of the Old Main Society and the Endowed Scholarship Society, among other Baylor activities. Wolfe’s daughter, Stephanie, BS ’89, is a Baylor Bear as well.