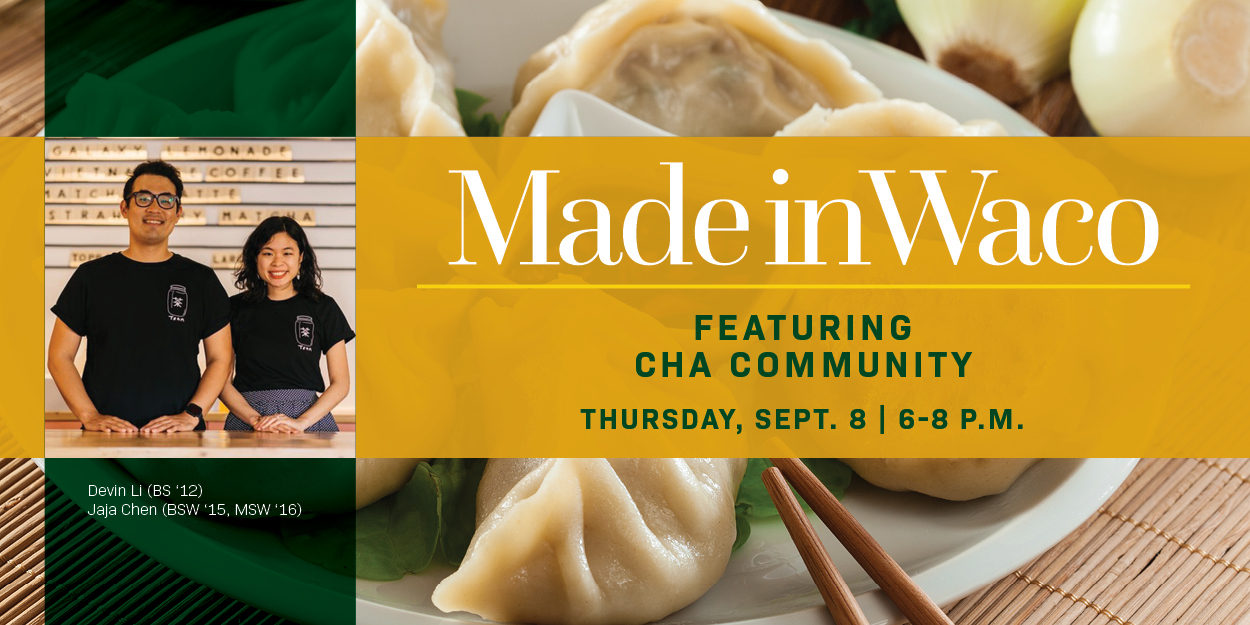 Made in Waco featuring Cha Community

Join us for Made in Waco; a series focused on organizations and leadership within our community! Sign up to join our hands-on dumpling-making workshop, to enjoy fresh boba and hear the story of Cha Community. Co-owners Jaja Chen (BSW '15, MSW '16) and Devin Li (BS '12) will walk you through how to fold, cook, and eat delicious handmade Chinese dumplings!

Cost: $50 (sales tax included)
Registration cost includes a full meal during the workshop: pork or vegetarian dumplings (not gluten-free), veggie side dishes, and fresh boba. You will also receive Cha Community's dumpling recipe so you can make them at home!

Cha Community's mission is to bridge cultures and create community through premium boba tea and handcrafted dumplings. Their values are community, diversity, and courage.

Cha Community (formerly Waco Cha) was inspired after a season of learning to cook and build community through food and tea. As Asian Americans with Chinese and Taiwanese immigrant backgrounds, co-owners Jaja Chen (BSW ‘15, MSW ‘16) and Devin Li (BS ‘12) had difficulties finding the food and drinks they grew up loving in Central Texas. In addition, finding Asian American inclusion and representation was a challenge.

With their passions for authentic Chinese and Taiwanese food and beverages and the values of diversity, community, and courage, they dreamed of a small business in 2017 with a mission of bridging cultures and creating community. They didn’t have a business plan, but they had their mission and values in hand alongside boba tea (also known as bubble milk tea) recipes they had tested in their kitchen. So they applied their boba tea pop-up idea to the Waco Downtown Farmer’s Market. 茶 (chá) - the Chinese word for “tea” - was incorporated into the business's name and the original logo. After over a year of waiting, their boba tea pop-up idea was accepted into the Farmer’s Market and eventually launched on Saturday, June 16, 2018, in a small 10’ by 10’ tent.

After one full year at the farmer’s market, the pop-up tent grew to sustain and launch a mobile boba tea truck in downtown Waco in summer 2019. They continued seeking to create community through events, including Board Game and Boba Nights, and Dumpling Night Workshops - using original recipes from Devin’s grandfather - around Waco. The COVID-19 pandemic brought a halt to many of the Cha community events.

In spring 2020, amid the COVID-19 pandemic, their first storefront opened in downtown Waco and their dumpling food concept pop-up tent opened at the Waco Downtown Farmer’s Market summer of 2020.

In the Fall of 2021, they rebranded from the original name of Waco Cha to Cha Community to better encompass their continued mission, values, and vision -- bridging cultures and creating community through premium boba tea and handcrafted dumplings. With their values of community, diversity, and courage, they plan to continue creating community with their team, guests, and within the local communities Cha Community is a part of.

Baylor Alumni of the Waco invites you to connect with fellow Bears in your area through unique events and networking opportunities. Get involved today!