Baylor Alumni and the Mayborn Museum presented a virtual glimpse into the World's Largest Dinosaurs exhibit.

The World's Largest Dinosaurs exhibit remain on display until Sept. 26, 2021. It explores the amazing biology of a group of uniquely super-sized dinosaurs: the long-necked and long-tailed sauropods.

Organized by the American Museum of Natural History in New York, the exhibition draws on paleo-biological research that looks in part to living organisms to make inferences about how these giants— some of which grew to be longer than 150 feet, or the length of four standard city buses—were able to thrive, as a group, for approximately 140 million years. 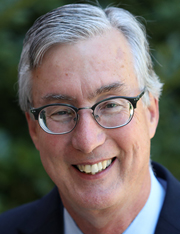 Charlie Walter is Director of Baylor University’s Mayborn Museum Complex. With over 30 years of professional museum experience, Walter has held positions as Chief Operating Officer of The DoSeum, formerly the San Antonio Children’s Museum, Director of the New Mexico Museum of Natural History and Science, and as Senior Vice President of the Fort Worth Museum of Science and History.

Mr. Walter has held numerous leadership positions in the museum field, and is currently on the boards of the Texas Association of Museums, The Museum Association of Waco, and the Waco Mammoth Foundation. He is also a member of the American Association of Museums Accreditation Visiting Committee. Walter served as principal investigator for three National Science Foundation funded projects: CSI – Crime Science and Inquiry; The Texas Network for Exhibit-based Teaching and Learning; and Whodunit? The Science of Solving Crime. He was selected as a Noyce Leadership Fellow in 2010.