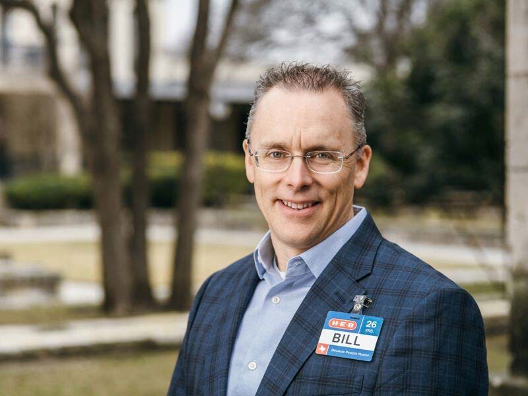 As a second-generation Baylor alum, Bill Anderson (BBA '91) says his time at Baylor was marked by formative faculty relationships and experience that would translate well into his more than 29-year career at Texas grocery retailer H-E-B. As the Executive Vice President for the Food and Drug Retail Division at H-E-B, Bill sat down to talk with Hankamer School of Business Dean Terry S. Maness, Ph.D. to talk about his company's response to the COVID-19 pandemic, hosted by Baylor Alumni.

Below are some excerpted questions from their discussion. To watch the interview in full, please click here.

Dean Maness: When did H-E-B first perceive there was an issue with supply and demand for many of your products?

Bill Anderson: Even though H-E-B is a regionally-based company, with stores in Texas and New Mexico, we have a lot of retail connections worldwide. We started getting a sense back in November and December, especially with our retailers that we are friends with in Asia, that something was going on. Then, we started to hear it from our European retailers, as well. So we implemented what we call our Emergency Operations Center right after the holidays. Basically, the first of January.

We do have a full-time team that does nothing but prepare for emergencies. Obviously, there are weather emergencies every single year, and there have also been other pandemics in the past that we've had to prepare for. So, we put them in place in January and started really working behind the scenes for several months before the general public even knew what COVID-19 was. That's when we first got the sense of what we were about to experience, based upon the experiences of what we were seeing in other countries.

Dean Maness: You know, something that impacted all of us – let's put it this way, let's talk about toilet paper. What happened to the toilet paper supply chain?

Bill Anderson: So interestingly enough, every crisis has its items that customers stock up on and, you know, typically in storms – hurricanes, floods, things like that – it's water and food first, and then cleaning supplies later. What's interesting in this case, it was the exact opposite.

Everyone started stocking up on toilet paper, cleaning supplies, sanitizers first. The issue with supply chain is that there's plenty of toilet paper in the United States. The challenge is, with a weather-related issue, it typically occurs in one state or in part of one state. And therefore, the panic buying only occurs in a very small percentage of the population. In this case, you had an entire nation that basically, in essence, was experiencing a hurricane all at one time. People started buying what I would say is, probably six months worth of toilet paper all in a matter of weeks. So, that's what made this issue even larger. This became a nation-wide issue and ultimately a worldwide issue, and that's where the supply chains were stretched.

Dean Maness: How did you keep stock on the shelves? Because it did get a little thin at times. Did you come up with new suppliers?

Bill Anderson: Yes, we did. So part of it was that we started loading up on product early. Before a lot of other US retailers actually did. So, we got supplies in in January and February which enabled us to stay in stock longer than a lot of other folks. But then our buyers and supply chain quickly went literally through North America and other places to find additional product. We sold some brands out of Mexico that we've never sold before, but that some of our New Mexico stores had. We had one brand that's still on the shelf today called Vogue, which is actually a scented toilet paper – it smells like apples. At one point, we got so much of it that it basically filled an entire aisle of a lot of our stores, which helped kind of calm the panic. The challenge was that as you walked toward that aisle, it smelled like apples. So it was really very pleasant, but it became kind of a calling card, and people have made a lot of funny memes about that particular bathroom tissue.

Dean Maness: You know, one thing that we talk with our students today about is the importance of agility and the being able to pivot in ways of dealing with uncertainty and the unexpected. And you talked about that in the supply chain, but another area where you pivoted to some extent is in the developing and extending of your curbside service program. Talk a little about that, because that not only carved out some space, but it was a different way of delivering product as well.

Bill Anderson: Interestingly enough, the curbside business went from being more of a convenience business to a necessity business for many of our customers. Before the pandemic, everyone thought about it as something they did conveniently, but it was almost a requirement for some of our customers, especially for those that were immunocompromised or in groups where the virus was more susceptible to cause serious issues.

We started making decisions that would have typically taken us months to implement, and we were doing it in literally hours and maybe a day or two. We call our employees partners, so that's what I'm referring to. We knew we were going to need more partners to select the orders because we could see the surge coming, so we closed some departments in our stores – bakery, deli, floral, our demo department and some others in order to free up those partners to then go and learn how to become personal shoppers. What would have taken literally six weeks to train in the past all of a sudden became a 3-5 day training program. We literally hired thousands of short-term partners in a matter of about a week or two. Many of those partners were either furloughed or laid off from other jobs as we went into the lockdown.

Next, came the issue of space. We were literally doing five to ten times the volume, overnight. So, the ambient product is pretty easy, you just find some shelf space somewhere in the store, either a conference room or a break room or other unused lease space. It's the refrigerated and frozen product that's more difficult. So, we were using coolers and freezers that would have typically been used to store product in the bakeries, delis, and in floral. We were dropping some tractor trailers at some stores to store product on a temporary basis, but doing everything we possibly could to expand capacity.

We had to get more equipment. Our partners use iPhones, so we worked with Apple to get literally thousands of iPhones overnighted to us. Time slot capacity became a really big issue – so we added more time slots per hour and extended our hours for curbside. We opened new locations – sometimes in the matter of a week, we would open a new curbside location, get the technology up and running.

And then, the thing a lot of people might not realize is that a year ago, we acquired the company called Favor, which was based in Austin. We acquired them because we knew we would need some delivery functionality in our portfolio. We added 75 new communities across Texas in the matter of about two weeks. Favor became our outlet for senior citizens. A lot of companies offer special hours of operation for senior citizens to come shop in the stores, but we looked at it a little differently. We would rather they actually not come out at all, so we wanted to set up a way for them to actually be able to have the product delivered to their home. So, we worked with Favor and actually set up an operations line where senior citizens could call or order online their groceries and have them delivered to their homes within two hours.