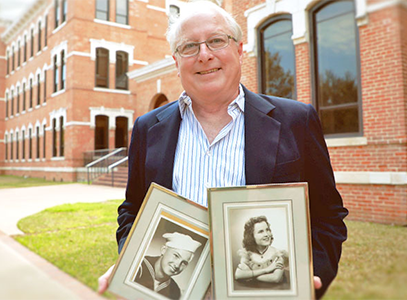 This is a story of how a blood transfusion more than 70 years ago set in motion a series of events that culminates in scholarship support for Baylor University students studying abroad.

In the late 1940s, Herbert and Ina Faye Knight were living in Waco, where Herbert served as manager for the local Luby’s cafeteria. Herbert and Ina Faye were early in their marriage, and before their first son was born, Ina Faye experienced a medical emergency that, compounded by her having a rare blood type, left her in danger of losing her life due to blood loss.

"My mother and father never talked to me about this event, but my uncle, my mother's brother, told me that Baylor students lined up to give blood to save my mother's life," Dale Knight, Ina Faye and Herbert's son, said. "I've never forgotten that were it not for the kindness of those Baylor students, I wouldn't be here nor would my younger sister, Mary."

He would never know their names, but Dale said that he is grateful for the young men and women who stood in line and gave blood to help a neighbor in need. That generosity, that willingness to help and to give, is a character trait seen over the decades at Baylor from natural disaster cleanup to clothing drives and service projects.

Ina Faye and Herbert moved shortly after the health scare to Dallas, where Dale said his father followed up that early beginning as manager of the Luby's in downtown Waco with a 50-year career with the restaurant chain. Herbert Knight managed Luby's cafeterias in Dallas and then in McAllen, where Dale graduated from high school. Following his success as a unit manager, Dale's father moved into upper management with Luby's, relocating to Dallas as area director and then to San Antonio as director of all operations.

Through it all, Dale said his parents always felt a closeness to Baylor, though neither of them graduated from the university, an appreciation they passed down to their son.

"I appreciated the solid values the school has historically represented."

A resident of Dallas and a graduate of what he describes as "the large state university 100 miles south of Waco," Dale sought ways to honor his parents and the gift given to them so many years ago by Baylor students. Ina Faye passed away in 2001 at the age of 75, and with his father's death at age 90 last August, Dale decided to establish a Baylor scholarship from proceeds of his inheritance from his parents' estate.

"My father and mother worked so hard to provide a better life for me and Mary. Since I have no children, this scholarship in some way allows me to share the benefits I've enjoyed thanks to my parents' sacrifices," Dale said. "My father's will directs that my sister and I receive inheritance in measured amounts over a five-year period. Thus, I'd have to wait five years for the amount I wanted to give, but by making a planned gift I can make the commitment now. Setting aside funds I'd be inheriting for a scholarship was something that felt right."

Through his estate, Dale has established the Ina Faye and Herbert Dale Knight Study Abroad Endowed Scholarship Fund in memory of his parents. It's a gift, he said, that blends his passion for travel with "a payback of sorts" for the kindness and compassion shown by Baylor students seven decades ago.

"My career was in corporate communications, working for a large financial services company, which provided me the opportunity to travel to major cities and small towns throughout North America," he said. "I approached each trip, each new destination, with genuine excitement. I left the company about 20 years ago, and with a decent investment portfolio in place I bought an around-the-world ticket and began globetrotting. I haven't stopped."

Dale said he hopes the scholarship honoring his parents will enable Baylor students to gain a greater appreciation for the global community.

"My life has been enriched beyond measure by the places I've been and the many friends I've made around the world," he said. "I love the quote by Saint Augustine: 'The world is a book, and those who do not travel read only one page.' I want to give Baylor students the inspiration and wherewithal to begin that journey."

The Baylor students who queued up so many years ago to help a neighbor in need could never have fathomed how that simple act of brotherly love, of helping someone in need, would ripple through the Knight family and return to create transformational experiences for Baylor's students so many decades later. Seemingly small actions created an enduring legacy of generosity and helped connect the Baylor community to one family's story for generations to come.

The Give Light campaign is creating a bright future for Baylor and our students. To learn more about how you can join your Baylor Family members in giving back and supporting our efforts, click here.