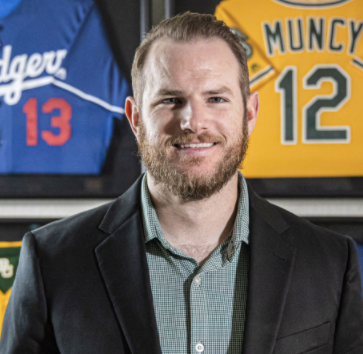 Muncy was a two-time All-Big 12 Conference selection at Baylor and led the Bears to the 2012 conference title. Following that season, the Oakland Athletics selected Muncy in the fifth round of the MLB First Year Player Draft. He made his Major League debut early in the 2015 season and now plays for the Los Angeles Dodgers.

Muncy and his wife Kelly, BSFCS ’13, met while they were students at Baylor and were married two weeks after hitting a historic home run—to end the longest game in World Series history—in 2018.

The Muncys are active with fellow Dodger Justin Turner’s foundation, which helps child trafficking victims and homeless veterans. They also support Kershaw’s Challenge and Casey Live, both of which are run by Dodgers pitcher and Texas native Clayton Kershaw.