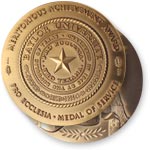 Awarded to an individual whose broad contributions to Christian ministry have made an immeasurable impact upon a local or global community.

Known around the world for his influential writings about faith and ministry, Max Lucado began honing his skills as a writer crafting columns for the church bulletin. As a missionary in Brazil, Max compiled these writings into a book and sought a publisher. After 14 rejections, Tyndale House, published Max's first book, On the Anvil, in 1985. Twenty-five years later, Max has published more than 75 books including his favorites, No Wonder They Call Him the Savior and the children's book, You Are Special. Max's love for Baylor began when his daughter, Sara, enrolled as a student. In recent years, Max has spoken at chapel, delivered the 2009 Ferguson-Clark Author Lecture and rooted for the Baylor Bears on game day. And although Sara graduated last May, Max developed an appreciation for the mission of Baylor University and a love for Dr Pepper floats that will last long into the future.