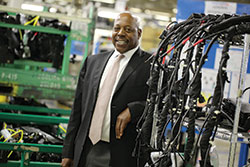 Brooklyn native Vinnie Johnson remains one of Baylor's greatest basketball players of all time. A two-time NBA champion with the Detroit Pistons, his hard work and dedication to the people of Detroit has remained long after he completed his career as a professional athlete.

Vinnie left his mark on the Baylor record books, averaging 24.1 points per game from 1977-79. The two-time All-American and All-SWC player holds the Baylor record for most points scored in a game and is a member of the Baylor Athletics Hall of Fame. A top-10 NBA draft pick dubbed “the Microwave” for his ability to heat up fast, Vinnie helped the Pistons win it all in 1989 and again in 1990.

When his playing days were over, Vinnie was determined to return the love that had been given him by the people of Detroit. He opened a business in inner city Detroit's Empowerment Zone to help improve the lives of those in the community. As CEO of Piston Automotive, Vinnie has helped to create hundreds of jobs. He also now serves as chair of The Piston Group in addition to other leadership roles in several companies associated with the automotive industry. Vinnie's business savvy helped his companies weather the economic downturn that has been so difficult on the motor city. While the company maintains its headquarters in Detroit, Vinnie's business operations have expanded to Missouri, Kentucky, and Ohio. In consecutive years, Inc. magazine named the Piston Group a top-five inner city business out of 4,500 nominated companies.

Recognizing leadership and accomplishments that have made a significant impact in our nation and on future generations, congratulations Vinnie Johnson, recipient of the Medal of Service for Business and Commerce.