Alumnus / Young Alumna of the Year

Awarded annually to a graduate over age 40 and age 40 or under who have demonstrated remarkable achievement in the previous year.

Alumnus of the Year 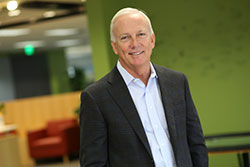 Waco native Godfrey Sullivan graduated from Baylor in 1975. An active student, Godfrey became float chair and president of the Taurus Society, a fun-loving fraternity with a penchant for mischief. As a result, Godfrey was closer to President Abner McCall than he would like to admit, having had frequent conversations with the President about activities of his fraternity. He credits this experience for helping to cultivate the negotiation skills that have served him throughout his career. Upon graduation, Godfrey moved to California, where he found himself on the ground floor of the personal computer revolution. By 1981, he was working for a small company called Apple Computer. He recounts the years that followed as "a rocket ship of a ride" in which he took part in the invention of an industry that has changed the world. Today, Godfrey is President and CEO of Splunk Inc., a software company based in San Francisco. He helped build Splunk from a very small data management company five years ago to one serving 6,000 major organizations in 90 countries today. Godfrey has enjoyed strong ties to Baylor, lecturing at the Hankamer School of Business, generously giving to endowed scholarships and supporting fundraising efforts for the new business school and football stadium. Growing up as a self-described "problem child," Godfrey counts himself, his family and friends among those most surprised by this honor. He hopes it will inspire others who have been similarly challenged to believe that they, too, can go on to do something remarkable.

For demonstrating exceptional achievement and leadership, congratulations to Baylor Alumnus of the Year, Godfrey Sullivan.

Alumnus of the Year 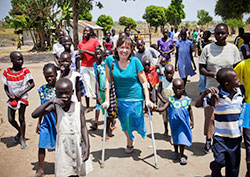 As a young girl, Michele Perry hated camping. And professionally she never envisioned herself working with children. The Lord had other plans. The city girl from Orange Park, Florida and 1999 Baylor grad, has spent the last seven years in southern Sudan without the benefit of electricity or running water and surrounded by 100 children who refer to her as Mama. Michele's life is proof the Lord works in mysterious ways. Born with multiple significant congenital birth defects, Michele had 23 surgeries by age 13. Still, she says God promised her that she would see people around the world come to know Him. At Baylor, her time serving with Mission Waco inspired her walk with God and ignited her heart to the field of Christian missions. After graduation, Michele served in missionary organizations in Bangladesh and India. In 2006, Michele stepped out on faith to singularly establish a presence for the missionary organization Iris Global in South Sudan. In a perilous environment where children are regularly abducted, trafficked, or used as child soldiers by warring rebel groups, Michele ministered to as many vulnerable children as possible. Within three years her mission had built a children's village on 40 acres. 110 children live there today, and 500 are served though the compound's nursery and school.

Michele recently returned to the U.S. to begin the next phase of her life -- but she certainly hasn't slowed down. She has started a nonprofit organization, Create61, to help others creatively find their callings. She began a leadership and business development firm called Edge Creative Consulting, is an author and is developing a vocational program to train other life and business coaches.

For demonstrating incredible faith and remarkable leadership by a graduate under age 40, congratulations Baylor Young Alumna of the Year, Michele Perry.