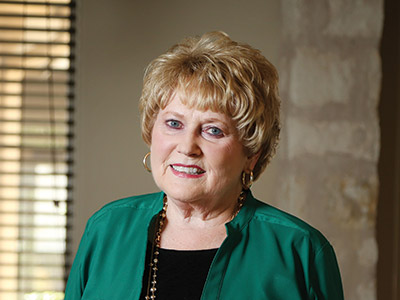 Longtime Baylor advocate Kate McLane Dimmitt held a special place in her heart for the University well before her days as a student here. Since then, she has continued giving back to her alma mater, like so many in her family. We honor her significant contributions through the presentation of the Baylor Legacy Award.

While growing up in Cameron, Texas, Kate McLane Dimmitt (BBA ’56) remembers her church receiving visits from the Baylor Religious Hour Choir, which greatly influenced her perception of Baylor. On a visit to campus, Dimmitt was struck by its beauty and friendly atmosphere, and she soon became a Baylor freshman residing in Alexander Hall.

After Baylor, Dimmitt worked for Tennessee Gas Transmission Co. in Houston. She married Malcolm R. “Mac” Dimmitt, an assistant U.S. District Attorney. When he died suddenly in 1970, the young widow, then with a small daughter, returned to work as a legal assistant for a law firm, now Sullins, Johnston, Rohrbach and Magers, until she moved to Temple in 1989.

She values the lifelong friends she made at Baylor. One of her favorite Baylor-related activities is getting together with her former classmates—a group that calls themselves “The Baylor Chicks of ’56”—for such Baylor events as Spring Fling.

Because being part of the larger Baylor family has influenced her and her family’s life, Dimmitt has sought to maintain the connection to the University and advance its objectives.

Dimmitt supported the construction of McLane Stadium and hopes the enthusiasm generated by the facility will remain prevalent among the student body for years to come. A fan of the football program, she believes an exciting team enhances the whole Baylor experience and compels people to participate.

Named the 2005 Distinguished Baylor Woman of Central Texas, Dimmitt faithfully supports student scholarships. She is a member of the Endowed Scholarship Society and the 1845 Society. She served on the President’s Scholarship Initiative Steering Committee and the Baylor Development Council.

Dimmitt and her family gave the 48-bell, 22-ton McLane Carillon to Baylor in 1988. Ringing daily from atop Pat Neff Hall, the bells’ melodies are a treasured part of campus life.

Her family is made up of fellow Bears, including daughter Katie Garrison (BSEd ’85), son-in-law Jimmy Garrison (BBA ’85) and grandchildren, Martha Garrison (BS ’12) and Sam Garrison, a Baylor sophomore. 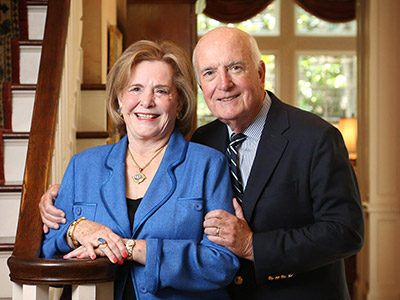 Tom and Pat Powers of Houston have chosen to invest in the lives of future generations, leaving lasting legacies in two fields of common interest: education and healthcare. We honor their significant contributions through the presentation of the Baylor Legacy Award.

Pat Graves Powers (BBA ’62) was born in Oklahoma, spent her early childhood in the Texas Panhandle and graduated from high school in Pasadena, Texas as a National Merit Finalist. She attended Baylor on an academic scholarship.

Born in East Texas, Tom Powers (BBA ’60) grew up in Corpus Christi, Texas. He finished in the top one percent of his high school class but had no resources for college tuition. Encouraged by Milton Cunningham (BA ’50), a friend from church who later became a Texas Baptist leader and Baylor Board member, Tom set his sights on Baylor and secured an academic scholarship to attend. At Baylor, he met his future bride, Pat.

After graduation, Tom worked for national accounting firm Price Waterhouse then joined a privately owned investment operation led by former U.S. Sen. Lloyd Bentsen. In 1976, Tom and a business associate organized the acquisition of an investment advisory firm that was part of Bentsen Group holdings and negotiated the sale of the entire operation to Transamerica Corp. in 1990.

Early in her career, Pat served in various management positions in Houston-based companies before becoming a full-time mom to the couple’s three children. Later, she established an interior design firm, obtained her ASID and developed a career in commercial and residential design.

Pat’s love for children and the underserved led her to a 25-year-long relationship with DePelchin Children’s Center, where she serves on the board. She also serves on the advisory board of Baylor’s School of Social Work.

Tom was a Baylor Regent from 1988-97 and Regent chair from 1996-97. During his tenure he helped develop Baylor’s endowment management strategy, utilizing expertise in investment management gained at the Fidelity Charitable Gift Fund, from which he retired last year and where he serves on the board. He also assisted with Baylor’s transition from the Southwest Conference to the Big 12.

The Powers’ commitment to giving back is a staple of their marriage. As newlyweds, they made a commitment that as soon as they had the resources, Baylor would be on their priority list.

The couple established the Pat and Tom Powers Chair in Investment Management and several scholarships for business and social work students. They also contributed to the construction of McLane Student Life Center, McLane Stadium and the Paul L. Foster Campus for Business and Innovation. 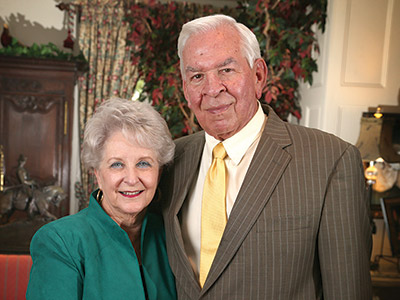 Walter and Sheila Umphrey’s appreciation for Baylor since their days on campus is made manifest through their visionary philanthropy, which has immeasurably shaped the campus and students’ lives. We honor their significant contributions through the presentation of the Baylor Legacy Award.

The foundation for Walter Umphrey’s (BBA ’59, JD ’65) legendary law career was built during the wee hours of study in the small home that he and his wife, Sheila, rented from Baylor while he pursued his law degree and she worked to support them. Rooted in these humble beginnings, the couple’s commitment to the University would lead to a stunning new home for Baylor Law School and an iconic pedestrian bridge linking campus to McLane Stadium.

Walter formed the Umphrey Provost law firm in 1969 and went on to become one of the true giants in the legal field.

Today, Provost Umphrey employs more than 20 lawyers, many of them holding Baylor Law School degrees. Those hires are based on more than school pride.

Remembering well how Baylor prepared him for his own career, Umphrey recognizes that attorneys who come through the Baylor Law School program “have been given personal attention and received a great education.”

In 1998, the Umphreys joined with fellow Baylor lawyers to fund construction that moved Baylor Law School from Morrison Constitution Hall to the state-of-the-art Sheila and Walter Umphrey Law Center along the Brazos River. The center carries the couple’s name in honor of their commitment, which was the largest in school history at the time.

In 2012, the Umphreys once again expanded Baylor’s presence along the river, funding the bridge that connects McLane Stadium to the campus. The Sheila and Walter Umphrey Pedestrian Bridge runs alongside the Umphrey Law Center, expanding the borders of Baylor University north of the Brazos.

In addition to Baylor, the couple supports their Gulf Coast community. They provided the lead gift for the Sheila Umphrey Recreational Sports Center at Lamar University, Sheila’s alma mater in Beaumont. Their philanthropy has also provided for the Walter Umphrey Cancer Center of Southeast Texas and Walter Umphrey State Park in Port Arthur.