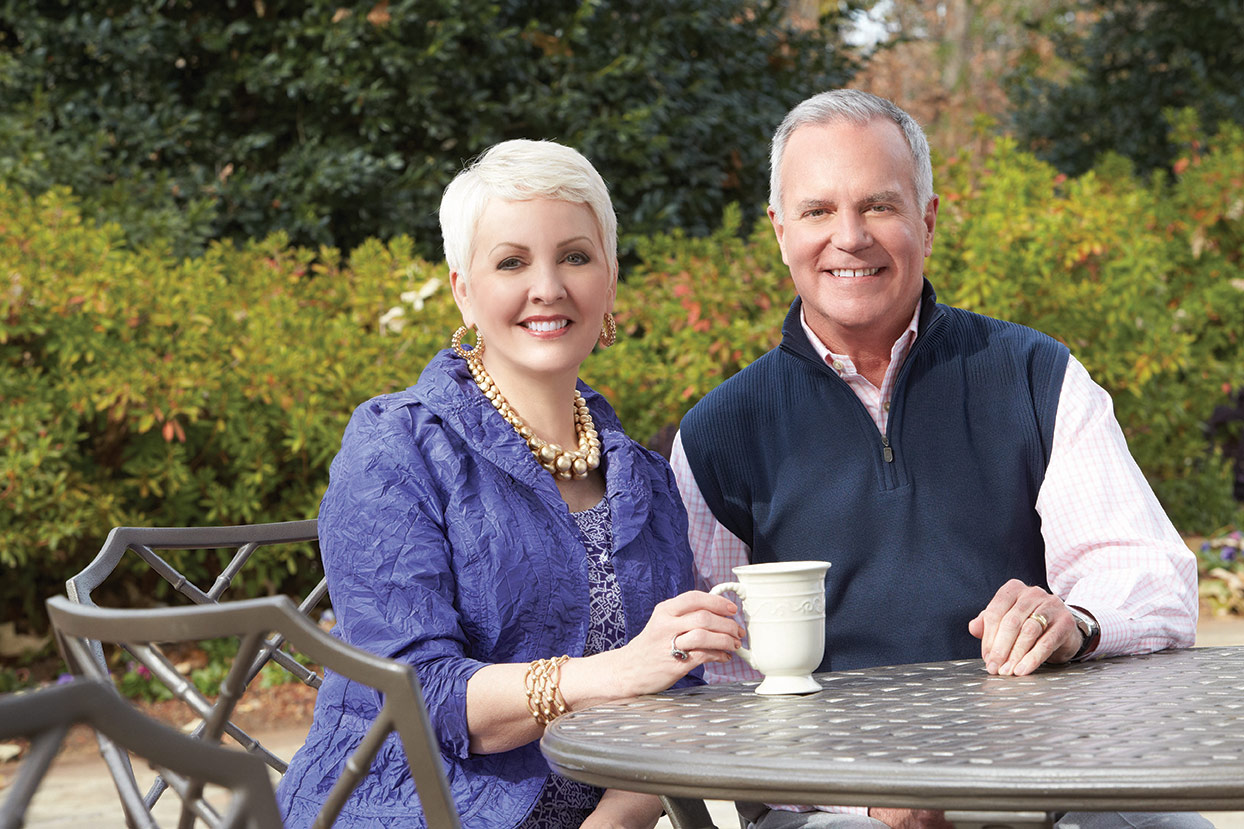 Steve, BBA ’73, JD ’75, and Penny, BA ’73, Carlile’s story is a picture of long-term commitment. They met at the age of 12, became high school sweethearts, chose Baylor, where both their fathers had attended, and were married shortly after graduation. They returned to their hometown of Marshall, Texas, where they built a life for themselves and others through their business and charitable endeavors.

They purchased a local pottery company and expanded it to a retail store, creating a need for more workers, but knew a retail store wasn’t large enough for their vision. To provide a supportive environment where women could work in whatever stage of life they found themselves, in 1996 the Carliles founded Home & Garden Party, a direct sales company featuring home decoration and party supplies. A merger renamed the company Celebrating Home, which the couple sold last year.

The Carliles have given generously to the places that shaped them. In Marshall, they supported reconstruction of the city park, invested in downtown redevelopment and helped form the Marshall Boys & Girls Club that has since grown to more than 10 clubs in the area. Their attachment to their hometown is shared by sons, Clay, BBA ’02, and Lance, MBA ’04, who both returned to Marshall after college to raise their families.

At Baylor, they have given back through scholarships for business students, engineering students and East Texas natives. A tangible sign of their benevolence at Baylor is the beautifully landscaped Steve and Penny Carlile Plaza outside the Paul L. Foster Campus for Business and Innovation. Inspired by their friendship with Hankamer School of Business Dean Terry Maness, the Carliles’ gift symbolizes their belief that long-term commitment to a community, both financially and relationally, can make a major difference. 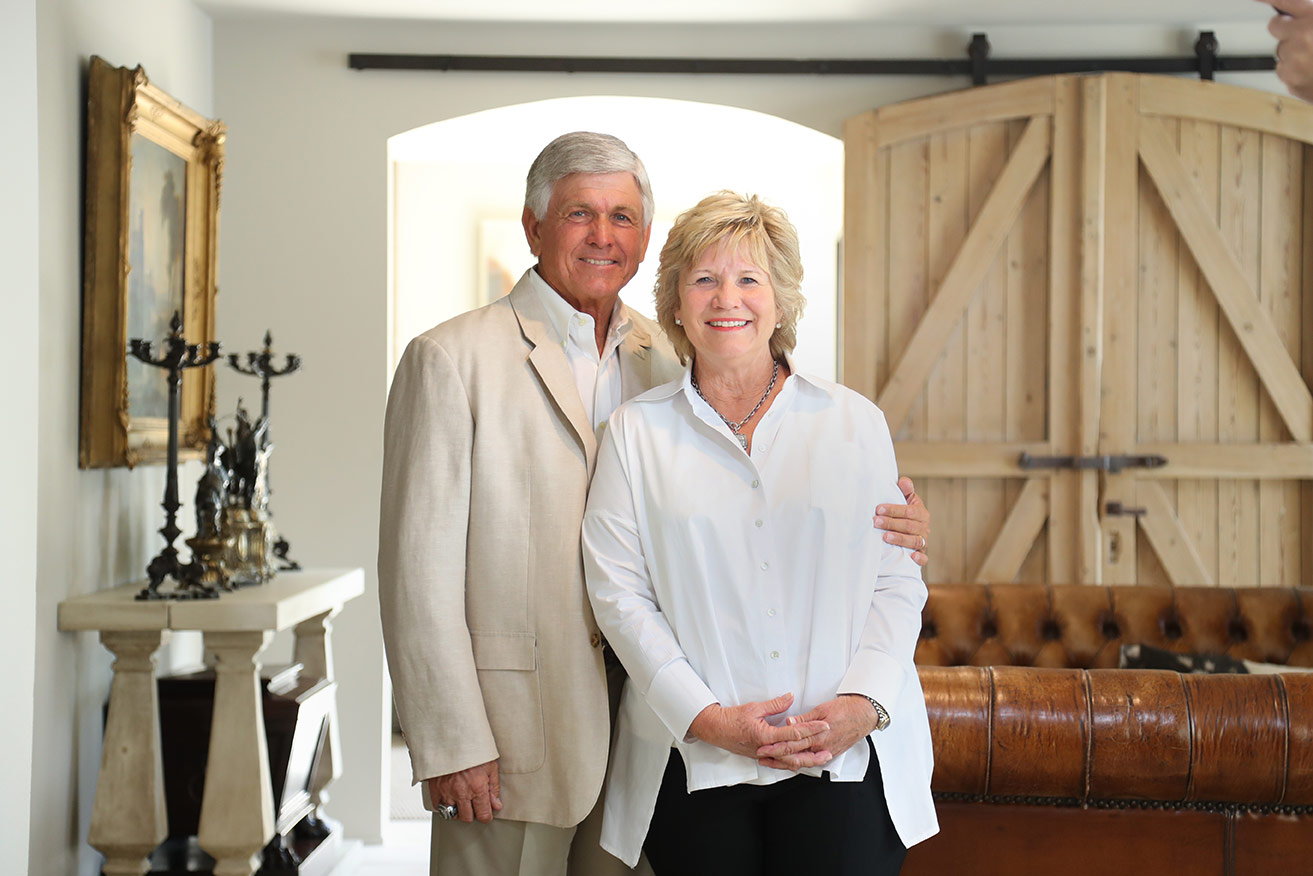 Growing up in nearby China Spring, Claude and Becky Lindsey began attending Baylor football games at an early age, inspiring their lifelong support of Baylor. No one can question the Lindseys’ commitment to the green and gold. During some of the lean years of Baylor football, Lindsey Contracting—the family construction business—would buy 500 tickets for the UT games and give them to employees … just to keep orange out of the stadium.

For more than 40 years, Claude was president of the business that the Lindseys and their two sons built into a 350-employee organization before selling to Oldcastle Materials in 2011. Becky, a nurse, has assisted Baylor’s sports medicine physicians and Assistant Athletics Director for Athletics Training Mike Sims for 12 years. Although she did not start the Baylor Spirit Program—which provides local businesses with Baylor flags and promotional materials to support the University—Becky personally signed up more than 300 businesses in an effort to promote school spirit by infusing Waco with more green and gold. The couple even kept the live bear mascots, Lady and Joy, on their ranch for more than a year while the bears’ campus habitat was remodeled.

The Lindseys generously donated asphalt work for residence hall parking lots and athletics facilities, including paving Grant Teaff Plaza at Floyd Casey Stadium, where they also donated the recruiting center. They contributed a riding arena at the Willis Family Equestrian Center and a court in the Hawkins Indoor Tennis Facility. Lindsey Contracting performed site work throughout campus, including at Baylor Law School, Baylor Sciences Building, McLane Student Life Center and virtually every athletics facility from 1988 to 2011. In addition to their generous in-kind gifts, the couple gave profits from their Baylor projects back to the University.

The 2007 Alumni by Choice recipients are members of the 1845 Society, the Bear Foundation and Barnabas Circle, among others. They have endowed The Rebecca and Claude Lindsey Athletic Training Scholarship, and both the Athletics Training and Women’s Tennis programs bestow annual student awards named in Becky’s honor. Many of Claude and Becky Lindsey’s undertakings on behalf of Baylor have been outside of the spotlight, but their ceaseless contributions have been absolutely critical to the Baylor family, to the lives of so many students and to the wellbeing of student-athletes. 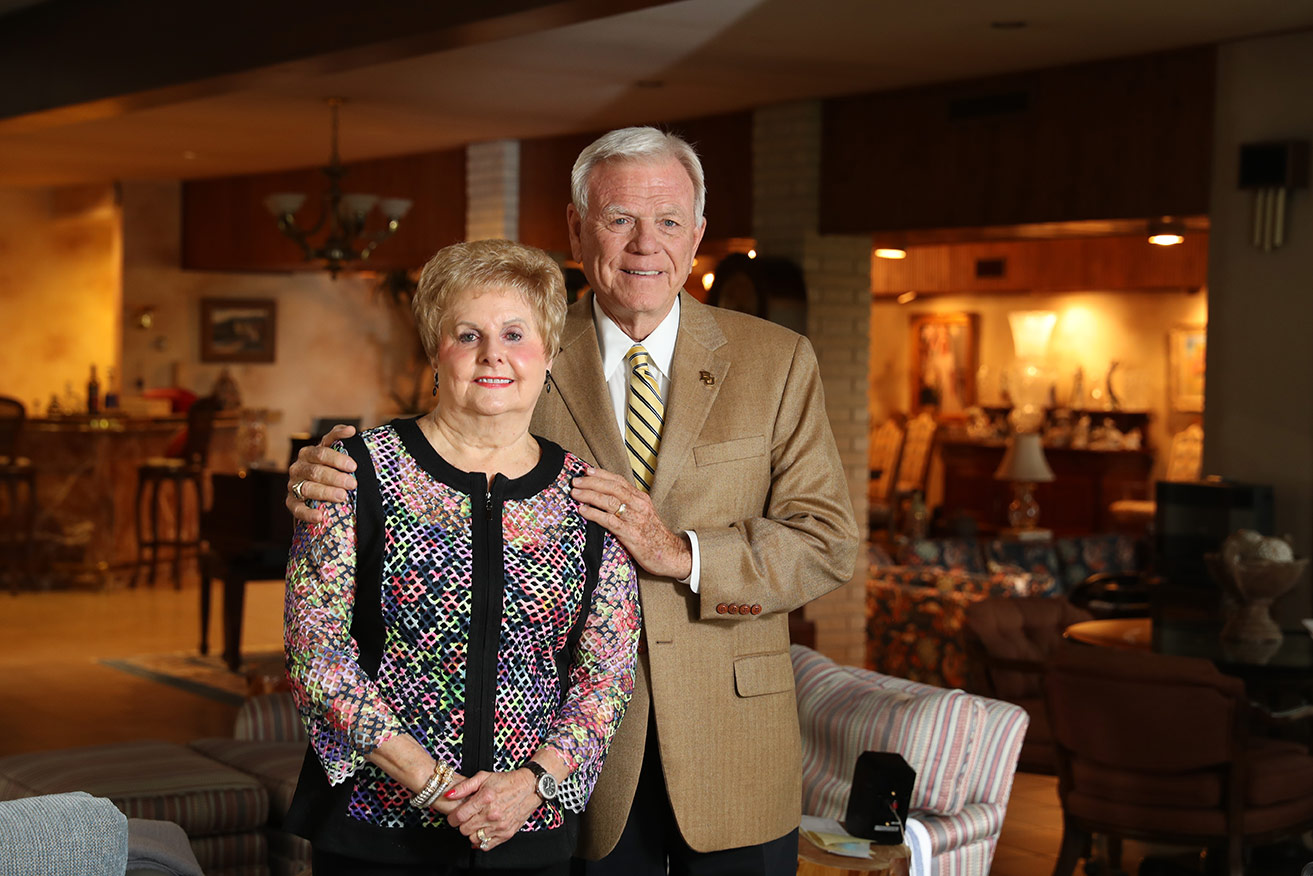 Don Riddle, BA ’60, never envisioned a career as one of Texas’ top trial lawyers. A journalism major, Riddle spent four years as an infielder with the Baylor baseball team and was named captain of the squad his senior year. He then spent nearly six years with the U.S. Marines, earning the Leatherneck Award as Platoon Honor Man after boot camp in San Diego. These experiences helped sharpen a quiet confidence that served him well as he changed careers and later served clients as a lawyer.

His law career developed from a suggestion by his wife. Don and Jenny met while both were working in Midland, Texas, in 1962, and they married a year later. Don began attending law school in Houston, with Jenny supporting them as secretary to the vice president of Shell Oil.

Don took a job with the well-known Brown, Kronzer, Abraham, Watkins and Steely firm in Houston, eventually becoming a partner. In 1974, he organized the firm of Riddle, Murphrey, O’Quinn and Cannon and continued to build a name for himself in the Houston legal community. In his five decades in the legal profession, he has won numerous high-profile cases and been honored with dozens of awards and recognitions, including being named one of the top 20 trial lawyers in America by Forbes magazine and a Super Lawyer of Texas by Texas Monthly.

As their lives blossomed, the Riddles never forgot Baylor. They showed their appreciation through gifts and an extended family legacy. Through their Riddle Foundation, the couple provided a major gift to fund the Stacy Riddle Forum, which houses meeting space for sororities. They also have supported numerous scholarships and other facilities, including the Sheila and Walter Umphrey Law Center, and founded The Ken Howard Music Scholarship to honor a childhood teacher of Don’s.

Jenny and Don’s daughter, Stacy Riddle Baumgartner, BA ’89, chose to follow in her father’s footsteps to his alma mater. Her choice was clearly meaningful for Don but was just as special to Jenny, who had long ago felt a part of the Baylor Family and was happy to have her daughter as a part of it—and to have her close by for regular trips to Waco. The oldest of their five grandchildren is a sophomore at Baylor this year, and Don and Jenny hope to influence others to attend as well.

Carroll and Aline Webb’s dedication to their alma mater is demonstrated as much by their presence as it is by the generosity they’ve displayed to Baylor for decades. Their desire to serve Baylor is so strong that in 1992, the couple moved to Waco from their hometown of Dallas so they could easily help out whenever needed.

Ten years apart, they both attended Highland Park High School in Dallas and then Baylor, where both persevered through challenging circumstances as students on the way to earning their degrees.

Just three months after Carroll began at Baylor, the attack on Pearl Harbor compelled him to enlist in the Navy. In 1944, he was shipped to the Pacific to serve on a crew transport at Iwo Jima and Okinawa. The following year, he was preparing to go to Japan when the war ended. He returned to Baylor to complete his accounting degree and upon graduating in 1947 joined the prestigious accounting firm Deloitte & Touche, where he spent nearly 38 years before retiring as the managing partner of the company’s Dallas office.

Aline faced a challenge of a different sort. After she arrived at Baylor in 1951, her father suddenly died. Desiring to help her grieving mother, Aline accelerated her class schedule and graduated early. As an education and English double major, she knew she could find a good teaching job in Dallas and help support her mother. Aline graduated a year early and quickly embarked on a teaching career that would span more than 30 years.

The Webbs’ stories converged in the early 1980s. After his wife Frances died, Carroll was introduced to Aline by mutual friends at Park Cities Baptist Church. The couple married in 1982.

In their 25 years back in Waco, the Webbs have served in numerous ways, from participating on the Hankamer School of Business advisory board and leading fundraising drives to encouraging students and supporting scholarships. A longtime member of the Bear Foundation, Carroll was honored recently for raising over $1 million for the organization. Other honors include the 2006 Milton T. Gregory Distinguished Service award, given to development volunteers who go above and beyond for Baylor, and induction into the Baylor Athletics Hall of Fame. The couple’s proudest contribution to Baylor is a scholarship Carroll established with help from colleagues at Deloitte & Touche as he approached retirement—The Deloitte & Touche/Carroll L. Webb Accounting Scholarship.