The Award for Exemplary Leadership in Church Music was instituted in 2005 and is given to a graduate of Baylor University who has contributed uniquely and significantly to some aspect of the broad scope of church music ministry. The award can be given for cumulative lifetime achievement or a singular contribution.

This summer we are excited to present the Award for Exemplary Leadership in Church Music to: 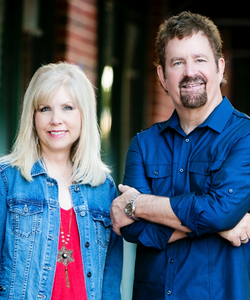 Having spent over four decades in the field of Contemporary Christian music, Chris and Diane Machen have had influence as singers, songwriters, publishers, actors, studio musicians, choir clinicians and worship leaders. Chris and Diane have recorded for Word Entertainment, Brentwood Records, Urgent Records, Discovery House Music and the Master’s Music Company. They have shared the stage with such artists as Wayne Watson, Steven Curtis Chapman, Larnelle Harris, Charles Billingsly, Steve Green, and The Imperials. They have appeared on national television, and their songs have been played on Christian radio across the nation. In September of 2019 they were inducted into the Texas Gospel Music Hall of Fame, and in September of 2020 their Choral Collection entitled “Our Faithful God” was nominated for a Dove Award. The Machens continue to contribute to Christian Music in the field of songwriting, having nearly 500 songs in their catalog, including titles recorded by The Gatlin Brothers, The Brooklyn Tabernacle Choir, The Imperials, Gold City Quartet, Luke Garrett, Steve and Annie Chapman, and the Talleys. Chris & Diane have written musicals for publishers like Word Music, Brentwood-Benson, Lillenas, Lifeway, Shawnee Press, and Hal Leonard. Their newest venture is a Broadway-style musical entitled Hope In The Heartland which is being produced in secular theaters around the country. Some of their familiar choir anthems, co-written with Robert Sterling, include I Have Seen the Light, And God Cried and God is Able. Their song, Bow the Knee, (co-written with Mike Harland and arranged by Tom Fettke) became Lillenas Publishing’s all-time top-selling anthem. The great desire of Chris and Diane’s heart is to serve God faithfully through their music, leading the Church in worship and reaching people with the Gospel of Jesus Christ, which they have done for over 40 years.