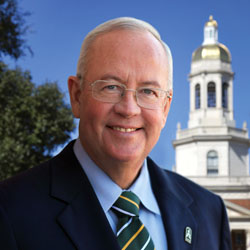 Judge Kenneth Winston Starr served as president of Baylor University from June 1, 2010, to May 31, 2016. He concurrently held the title of chancellor, beginning on November 11, 2013, and served as The Louise L. Morrison Chair of Constitutional Law at Baylor Law School.

A sixth-generation Texan, Judge Starr created The President’s Scholarship Initiative during his initial days at the helm of the state’s oldest, continuously operated institution of higher education. The three-year challenge raised $100 million for student scholarships five months ahead of its goal.

During his tenure as president, Judge Starr oversaw the creation of Pro Futuris, a strategic vision developed with the collective wisdom of the extended Baylor family that was adopted by the Baylor Board of Regents on May 11, 2012. Baylor University subsequently flourished on many fronts.

Baylor’s enrollment for the fall 2015 semester included a record total of students (16,787) and of undergraduates (14,189). In addition, the freshman class – composed of 3,394 students – was the most academically qualified entering class in Baylor history and had a minority enrollment of 34 percent.

Prior to coming to Baylor, Judge Starr served for six years as The Duane and Kelly Roberts Dean and Professor of Law at Pepperdine University, where he taught current constitutional issues and civil procedure. He also has been of counsel to the law firm of Kirkland & Ellis LLP, where he was a partner from 1993 to 2004, specializing in appellate work, antitrust, federal courts, federal jurisdiction and constitutional law. Judge Starr previously taught constitutional law as an adjunct professor at New York University School of Law and was a distinguished visiting professor at George Mason University School of Law and Chapman Law School.

Judge Starr argued 36 cases before the U.S. Supreme Court, including 25 cases during his service as Solicitor General of the United States from 1989 to 1993. He also served as United States Circuit Judge for the District of Columbia Circuit from 1983 to 1989, as law clerk to Chief Justice Warren E. Burger from 1975 to 1977 and as law clerk to Fifth Circuit Judge David W. Dyer from 1973 to 1974. Starr was appointed to serve as Independent Counsel for five investigations, including Whitewater, from 1994 to 1999.

The author of more than 25 publications, including the book First Among Equals: The Supreme Court in American Life, Judge Starr was a member of the Board of Directors for the National Association of Independent Colleges and Universities (NAICU) and served as president of the Southern University Conference. In addition, he served as a member of the Board of Trustees for the Baylor College of Medicine and the Board of Trustees for Baylor Scott & White Health.

A member of Columbus Avenue Baptist Church in Waco, Judge Starr and his wife, Alice, have three children and six grandchildren.