In 1841, delegates to the Union Baptist Association meeting accepted the suggestion of Reverend William Milton Tryon and District Judge R.E.B. Baylor to establish a Baptist university in Texas.

The Texas Baptist Education Society then petitioned the Congress of the Republic of Texas to charter a Baptist university in the fall of 1844. Republic President Anson Jones signed the Act of Congress on Feb. 1, 1845, officially establishing Baylor University. Reverend James Huckins, the first Baptist missionary to Texas, was Baylor's first full-time fundraiser and the third founding father of the university.

Although these three men are credited as being the founders of Baylor University, many others worked to see the University established in Texas, including the 15 members of Baylor’s first Board of Trustees. 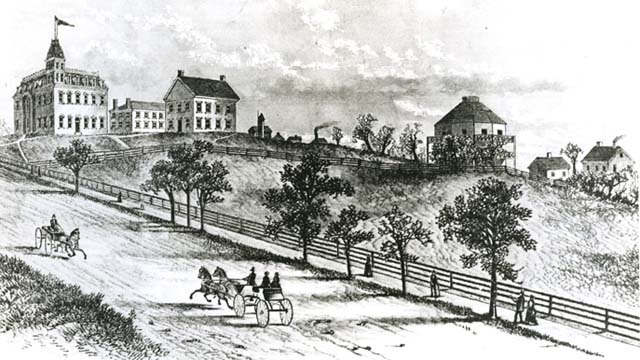 After the University was chartered on February 1, 1845, four communities made bids to be the location for the institution: Travis, Huntsville, Shannon's Prairie and Independence. Independence was selected, and classes for preparatory students began in May 1846 with college courses offered the following June.

By the time Baylor was chartered, chattel slavery had become woven into the cultural and economic fabric of the Republic of Texas. All three of Baylor’s primary founders were slaveholders, as well as 11 of Baylor’s first 15 members of the Board of Trustees. In the 1850 federal census of Washington County, where Baylor University was located at the time, 47 percent of the total population were enslaved people. Located in the Brazos River Valley between Houston and Austin, Washington County’s loamy soil was well suited to cotton cultivation, for which enslaved people provided much of the labor. At the onset of the American Civil War, the county had become the second most populous county in Texas and one of the leading cotton-producing counties in the state. Given the era of the University’s founding and initial decades of operation, the agricultural economy of the region surrounding Independence, and the importance of the financial support that slaveholding founders and early trustees provided the University, it is understood that the labor of enslaved people, both directly and indirectly, played a significant role in Baylor University’s history from the very beginning of the institution’s existence and throughout the University’s growth during its early years in Independence. The identities of these enslaved persons are unknown, but the University acknowledges their place in the Baylor story and humbly recognizes their contributions to the foundation upon which the University was built.

In 1886, Baylor and Waco University consolidated to form Baylor University at Waco.

From humble beginnings in Independence, Texas, the campus has grown to approximately 1,000 acres in Waco, Texas, annually educating more than 19,000 men and women to pursue their individual life callings.

These are exciting times in the life of the University - a period in which our institution is striving to remain both a relevant institution of higher learning for the coming years and to continue to fulfill our original mission to be a Christian University "fully susceptible of enlargement and development to meet the needs of all ages to come." In a world where faith is often the casualty of a serious pursuit of academic achievement, Baylor is a special place.

The ability and willingness of Baylor to adapt and change to achieve continual progress can be traced throughout its history. It has endured and survived hardships, from financial difficulties, to the Great Depression, to world wars. It made a historic and critical decision to move from Independence to Waco, its current home. It divested its medical and dental schools at a time when that proved to be the most prudent decision for the success of each program. It even had the foresight and fortitude to change its very charter to insulate the institution from denominational struggles. In 2020, as part of its acknowledgment of the University’s history regarding slavery and racial injustice, the University again embraced the opportunity to strengthen its commitment to ensuring that Baylor University is a place that values equity, condemns injustice and offers a welcoming environment for all students.

Had Baylor and its leaders throughout history not faced these decisions and challenges with foresight and a commitment to progress, it would not be the leading university that it is today. The University's Illuminate strategic plan will continue to help Baylor adapt and grow with the world around it, while ever strengthening its original mission and heritage.

Baylor is classified as a Doctoral University with Higher Research Activity (R2) by the Carnegie Commission on Higher Education. Baylor has an international reputation for educational excellence built upon the faculty's commitment to teaching, scholarship and interdisciplinary research that produces outstanding graduates.

Baylor University is a private Christian university and a nationally ranked liberal arts institution. Our rank of alumni include missionaries and pastors, heads of Fortune 500 companies, governors of Texas and professional athletes. Chartered in 1845 by the Republic of Texas through the efforts of Baptist pioneers, Baylor is the oldest continually operating university in the state.