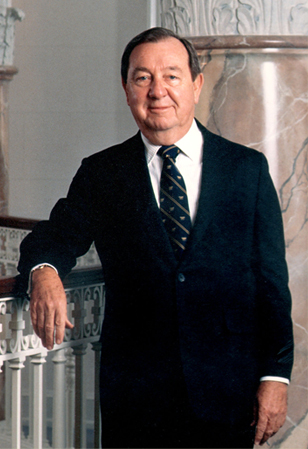 "Do not go where the path may lead; go instead where there is no path and leave a trail...." --Ralph Waldo Emerson

Within this deceptively simple statement, Emerson identifies a distinguishing characteristic of those individuals to whom the mantle of "greatness" is assigned. To follow one's leading into unfamiliar realms requires a level of perceptual awareness and conviction uncommon in the populace of any era and yet, this is precisely the means by which the human community has defined itself throughout history. This is the means through which discoveries have been made and progress achieved.


The life of Joe Allbritton serves as a rich example of these traits. He was, without question, an explorer, a 20th century adventurer who perceived acutely and proceeded with great conviction, lighting his path brightly for those who would follow. He believed fervently in the creative potential of the mind and the impact of his endeavors on behalf of future generations is clearly evident today in the areas of law, medicine, and the arts.


A lifelong supporter and nurturing force of Baylor University, Joe Allbritton understood the capacity of the arts to transform and enrich the life experience and its ability to empower human endeavor. His commitment to sharing this profound awareness through the establishment of Baylor University's Allbritton Art Institute has significantly contributed to the culture of the University and the lives of the many students who participate in the Institute's programs. Through his vision and selfless generosity, Joe Allbritton has initiated a process of perceptual growth and transformation that will expand exponentially as students of the Institute move through time into their respective futures, touching so many others along the way. I cannot imagine a greater gift, a more meaningful legacy.


Joe Allbritton passed away on December 12, 2012. We will miss Joe's person immensely, but we will honor his gifts always.