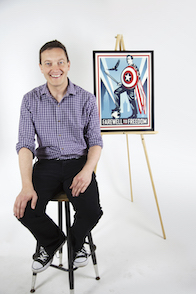 Dr. Elkins arrived at Baylor University in 2011, having completed a postdoctoral appointment at the Yale University Art Gallery and, before that, researching and teaching at the Institut für Archäologische Wissenschaften at the Goethe Universität in Frankfurt, Germany.

A scholar of the Roman Empire, he is author or co-editor of several books, in addition to author of numerous scholarly articles and chapters. His single-authored books include A Monument to Dynasty and Death: The Story of Rome’s Colosseum and the Emperors Who Built It (Johns Hopkins University Press, 2019), The Image of Political Power in the Reign of Nerva, AD 96-98 (Oxford University Press, 2017), and Monuments in Miniature: Architecture on Roman Coinage (American Numismatic Society, 2015). Dr. Elkins teaches the art history survey sequence and upper-level courses on Greek and Roman art and archaeology in the Department of Art & Art History. He has involved several students in his own research and mentored others in their own; several have accompanied him at the excavations of the late-Roman synagogue at Huqoq, Israel.

In addition to his strong commitment to teaching and research, Dr. Elkins’ background includes serving on Baylor’s Faculty Senate and its executive committee, and two years of service as Director of Undergraduate and Scholarly Achievement (URSA) for the Arts, Humanities, and Social Sciences at Baylor University. He is active professionally, serving two terms on the Cultural Heritage Policy Committee of the Archaeological Institute of America (AIA), as Chair of the AIA’s Excellence in Undergraduate Teaching Award Committee, and as editor (ancient world) of the American Journal of Numismatics, an international peer-reviewed journal published annually by the American Numismatic Society. He is a member of the Alumni Association Board of Directors at the University of Evansville and of the Advisory Board of the Department of Ancient Mediterranean Studies at the University of Missouri.

He regularly speaks before the Cultural Property Advisory Committee of the U.S. Department State to advocate for the protection of ancient coins and antiquities from looting in international agreements and consults often with Federal Bureau of Investigation, Homeland Security Investigations, and Immigration and Customs Enforcement on looted and smuggled antiquities. In 2017-2018, he served on the advisory board for an international, collaborative research project entitled “Countering the Looting of Antiquities from Syria and Iraq” that was spearheaded by the Terrorism, Transnational Crime and Corruption Center at George Mason University and funded by a $400,000 grant from the U.S. Department of State.