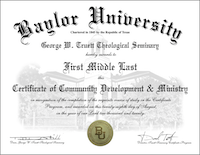 The Certificate of Community Development & Ministry is intended for students who want to learn Christian community development skills and understand urban issues, particularly among the poor and marginalized.

Students working toward this certificate must meet a specific set of requirements, which will be detailed in the Certificate Program Course Catalog. These requirements will include the following:

*Elective can be chosen from any combination of seminar courses, partnership courses, or Independent Study Projects.

Jimmy Dorrell is co-founder and President Emeritus of Mission Waco Mission World. He grew up in Conroe, Texas and came to Waco in 1968 to attend Baylor University where he majored in religion and received a BA in 1972. He graduated from Southwestern Baptist Theological Seminary with an MDiv in 1978 and received his MA in Environmental Studies from Baylor in 1993. In 2001, he received his Doctor of Ministry degree from Eastern Baptist Theological Seminary in Philadelphia.

Dorrell is pastor of Church Under the Bridge and also teaches classes at Baylor University and Truett Seminary in Waco. He has served on several boards and helped found three other non-profit organizations. He has been pastor of Church Under the Bridge (Waco) since 1992 and is Co-Executive Director and President Emeritus of the Texas Christian Community Development Network. He has been a frequent writer for the Waco Tribune Herald Board of Contributors for 15 years. Dorrell has been honored through awards such as Family of the Year Award-Waco Conference of Christians & Jews, Whataburger Hometown Hero, Citizen of the Year-National Association of Social Workers (Waco Unit), Baylor University Alumni’s Abner V. McCall Humanitarian Award, both the Wacoan Magazine and Waco Tribune Herald “Person of the Year,” and the Baylor Distinguished Alumni Award (2017).

After receiving his degree from seminary in 1978, he and his wife, Janet, traveled the world to work among the poor, and then moved into the North Waco neighborhood, where they began their call to incarnational ministry, to live among the poor and help bring “good news” through relationships and empowerment opportunities. Dorrell’s passion for the poor and mobilizing the middle-class to become involved in the lives of the poor became the strategy for Mission Waco Mission World that continues today. The have continued to live in the same home for over 40 years.

For fun, Jimmy enjoys table tennis, tennis, global travel and spending time with his wife, Janet, and their children and ten grandchildren.