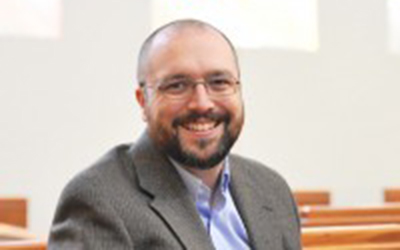 J. David Tate serves as the Director of Truett Seminary’s Online Certificate Program, a non-academic theological educational option for lay-people, church leaders, and bi-vocational ministers. David earned his BA from Houston Baptist and his MDiv from Truett where he was a CBF Leadership Scholar and received the Robert Jackson Robinson Preaching Award. He joined the Truett staff in 2015 after serving as Executive Director of the SONlight Foundation.

Aside from his experience in multiple pastoral roles, David has eight years of experience in information technology and 10 years in non-profit ministry, as well as 16 years of business ownership. In addition to his role at the Seminary, he travels around the state for pulpit work, serves at Calvary Baptist Church, and enjoys disc golf, board games, and home renovation. David and his wife, Lydia, have three teenaged sons whom they affectionately refer to as “The Trilogy.”