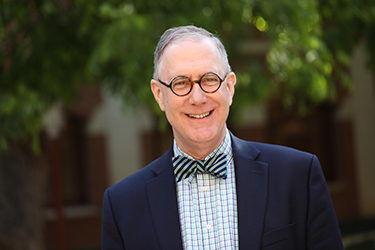 Dr. Scott M. Gibson holds the David E. Garland Endowed Chair in Preaching and serves as the Director of the Doctor of Philosophy in Preaching program at the George W. Truett Theological Seminary of Baylor University. Prior to coming to Truett in 2018, Dr. Gibson served for 27 years at Gordon-Conwell Theological Seminary in South Hamilton, MA, teaching preaching and directing various programs in preaching. At Gordon-Conwell he was the Haddon W. Robinson Professor of Preaching.

Professor Gibson is a native of New Castle, Pennsylvania. He attended the Pennsylvania State University where he majored in education. After completing the Master of Divinity degree at Gordon-Conwell Theological Seminary, Gibson continued his studies at Princeton Theological Seminary where he was awarded the Master of Theology degree (homiletics), the University of Toronto where he earned a master's degree (church history), and the University of Oxford where he completed the doctor of philosophy degree (church history), concentrating on the life, preaching and work of A.J. Gordon.

Upon his return from Britain in 1985, Professor Gibson served as a pastor and interim pastor at churches in Pennsylvania, New York and Massachusetts. In addition to editing, co-authoring, and authoring several books, he has contributed numerous articles to books and journals, in addition to having other writing and research projects in hand. He has served as editor of The Journal of the Evangelical Homiletics Society since 2000 and was editor of the ABE Journal for 14 years. Dr. Gibson is an ordained Baptist minister. He is past-president and co-founder of the Evangelical Homiletics Society. He lectures on preaching in seminaries and colleges and preaches at churches and conferences. Dr. Gibson and his wife, Rhonda, live in Hewitt, TX.