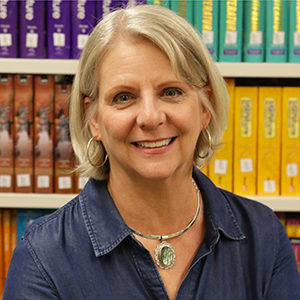 Meg Cullar has been director of communications for the School of Education since 2013. Her responsibilities include maintaining the School’s marketing presence on the website (baylor.edu/SOE); producing the Impact newsletter in print and online (baylor.edu/SOE/impact); maintaining the Instant Impact news blog (blogs.baylor.edu/SOE); managing the Schools’ social media presence on Facebook, Instagram and Twitter (@baylorSOE); overseeing advertising for the School; production of promotional program brochures, major event flyers and other materials; and other communication duties.

Ms. Cullar is a Baylor graduate and earned a degree in journalism with a second major in art. She has worked at Baylor since 1995 and served for many years as news editor of the Baylor Line, the magazine of the Baylor Alumni Association. She performed many other communications duties for the association, including production of an email newsletter and event promotions. She was an adjunct lecturer in Baylor’s Department of Journalism, Public Relations & New Media from 2009-2013, teaching “Writing for Media Markets.” Earlier in her career, she worked as an independent public relations consultant and was public relations director for Word Publishing, a publisher of Christian books and films.