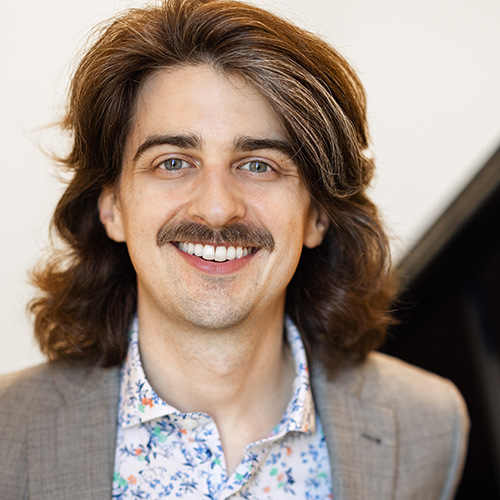 Clark has appeared in thirteen states as a soloist, chamber musician, and clinician, specializing in twentieth- and twenty-first-century repertoire. His recent collaborations with living composers include the first commercial recording of Karim Al-Zand’s “Stomping Grounds” for violin, clarinet, and piano, for PARMA Records, and the premiere of David Mahloch’s “A Light” for mezzo-soprano, guitar, violin, and piano.

A member of Music Teachers National Association (MTNA) since 2010, Clark currently chairs the Texas MTNA Competition. He previously served on the Executive Board of Texas Music Teachers Association and as president of Forum Music Teachers Association. Clark is also active in the Frances Clark Center for Keyboard Pedagogy and recently contributed to their From the Artist Bench, Inspiring Artistry, and Quick Teaching Tips video series. His pedagogical writing has appeared in American Music Teacher, Piano Magazine, and the MTNA e-Journal.

Clark was appointed as Lecturer in Piano at Baylor University in 2022. Before coming to Baylor, he taught in collegiate, studio, and community outreach settings in the Houston area. Clark earned the DMA in Piano Performance with the Certificate in Teaching and Learning from Rice University, MM in Piano Performance and Pedagogy from the University of Houston, and BM in Piano Performance from Ithaca College. His primary teachers include Robert Roux, Nancy Weems, Jennifer Hayghe, and Melinda Smashey Jones. Clark studied pedagogy with Courtney Crappell and John Weems and has been a Nationally Certified Teacher of Music (NCTM) since 2017.