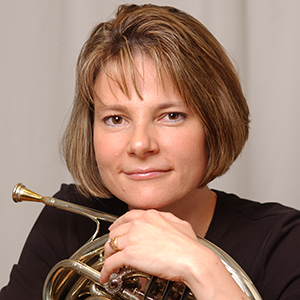 Kristy Morrell is Associate Professor of Horn at Baylor University. Prior to her position at Baylor she was Chair of the department of Winds, Brass, and Percussion, and a faculty member at the University of Southern California for more than 20 years teaching french horn, chamber music, and career strategies. She has been a member of Los Angeles Chamber Orchestra for nearly two decades and performed frequently with the Los Angeles Philharmonic, Los Angeles Opera, Pasadena Symphony, Pacific Symphony, and the Los Angeles Bach Festival. Active also as a soloist, chamber musician, and clinician, she has appeared at numerous professional symposia, as well as at leading universities and conservatories.  She is also a respected recording artist, having performed on numerous motion pictures, television soundtracks, and records.

Kristy has a Doctor of Musical Arts degree from the University of Southern California, where she also received her Master of Music. She received a Bachelor of Music and a Performer's Certificate from the Eastman School of Music.

She resides in Texas with her husband Steve, daughter Libby, and son Russell.