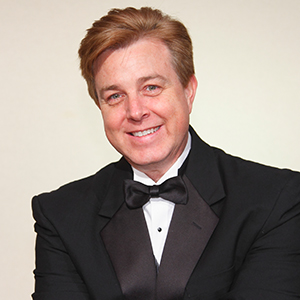 "The Baylor Music Education department prepared me in many ways as a choral director. There are obvious skills I learned, like how to lead a rehearsal, how to select literature, and how to manage a classroom; but as I look back on my time at Baylor, I appreciate most the relationships and mentorship fostered by my professors who truly demonstrated their care for me. Now, I feel as though I am paying it forward in my care for my students and families as well."

Michael Dean is in his 27th year as a choral director in the Hurst-Euless-Bedford Independent School District. After teaching eight years at Hurst Junior High, he moved to Trinity High School in 1998. While maintaining superior ratings at UIL competition, the choirs at Trinity have also been awarded "Best in Class" at various music festivals across the country. Mr. Dean's choirs have performed with the King's Singers in the Morton Meyerson Symphony Center and Chanticleer in the Fort Worth Bass Hall. In both 2004 and 2012, Mr. Dean's Trinity High School A Cappella Choir sang at the TMEA Convention as one of the 5A invited choirs. In 2009, the A Cappella Choir was chosen the National Mixed Choir winner for the Mark of Excellence Choral Honors Project.

Mr. Dean received his Bachelor of Music Education with honors and Master of Music in Conducting from Baylor University. There he was named ACDA Choral Musician of the Year in 1987 and 1990 as well as Outstanding Graduate Student in 1990. Mr. Dean was selected Teacher of the Year for Hurst Junior High School in 1998 and Trinity High School in 2007. In 2010, Mr. Dean was the recipient of the Score a Goal in the Classroom's "Outstanding Choral Music Educator Hero" award.