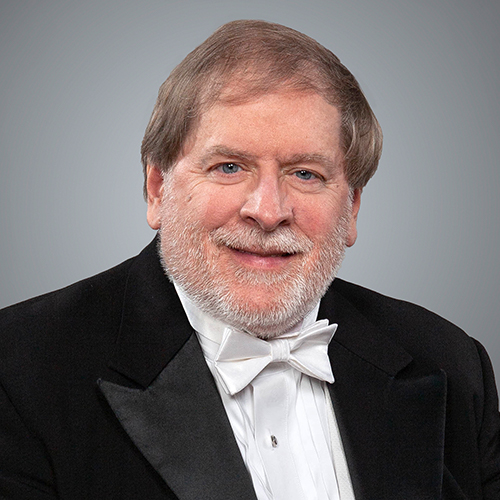 Stephen Heyde is Music Director/Conductor of the Waco Symphony and the Mary Franks Thompson Professor of Orchestral Studies and Conductor-in-Residence at Baylor University. Before assuming his duties at Baylor in 1984, Mr. Heyde was on the violin faculty at West Virginia University from 1975-1984. He is a co-founder of the College Orchestra Directors Association and served as President of the organization from 2006-08 and received the Lifetime Achievement award in January 2018, only the second such award given by CODA. Stephen Heyde made his European debut with the Krakow State Philharmonic in March 1998. Since then, he has conducted in Europe many times including a residency in Budapest, Hungary where he conducted the orchestra of the prestigious Liszt Academy and received the prestigious Ferenc Liszt ring. He has been an invited member of the ensemble juries for the 55th and 57th annual European Music Festival for Young People and recently conducted the Córdoba Symphony Orchestra in Argentina. Stephen Heyde has collaborated with many of the greatest artists of our time, including Itzhak Perlman, Yo-Yo Ma, Renée Fleming, Joshua Bell, Emanuel Ax, Midori, James Ennis, André Watts, Henry Mancini, Burt Bacharach, Doc Severinson, Art Garfunkle and Chris Botti among many others. Heyde has conducted All State Orchestras and other festival orchestras in numerous states around the country. He is a frequent evaluator of collegiate orchestra programs and conductors and has been a guest conducted at many Universities, most recently at Yale University, University of Oregon, University of Texas at Austin and Brigham Young University. Under Mr. Heyde’s direction, the Baylor Symphony has performed eight times at the Texas Music Educators Clinic/Convention, appeared at the prestigious Piccolo Festival and at national conferences of the American String Teachers Association and CODA and was featured in a nationally televised PBS Special with an estimated audience in excess of six million viewers. This year, the BSO was named winner of the coveted American Prize for an unprecedented fourth consecutive year. Under Stephen Heyde’s direction, the Baylor Symphony has toured internationally in Costa Rica and Belgium. Stephen Heyde is a recipient of Outstanding Teaching Awards at West Virginia University and Baylor University.