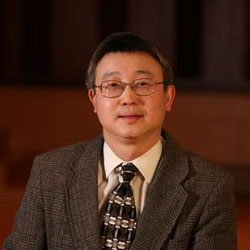 Eric Lai is Professor of Music Theory at Baylor University, and holds degrees from the Royal Scottish Academy of Music and Drama (Dip. RSAMD) and Indiana University (MM, PhD). Before coming to Baylor, he taught at Indiana University and Hong Kong Baptist College, and was a Visiting Scholar at the University of Wisconsin-Eau Claire. Lai was a former editor of Indiana Theory Review, has served on the Committee on Committees of the American Musicological Society and the Executive Board of the Texas Society for Music Theory, and is currently on the Board of Directors of the Bruckner Society of America. He is the recipient of numerous awards from Baylor (including the Young Investigator’s Award of 1996 and a ONE-URC award of 2022), and has held research grants from the Chiang Ching Kuo Foundation and the University of Michigan (2006), Spiralis Foundation (2009), and the Paul Sacher Foundation (2006, 2022). Lai has presented papers at national and international meetings of music theory, musicology, and ethnomusicology, and his writings have appeared in Perspectives of New Music, Music Theory Spectrum, MLA NOTES, Asian Music, Association for Chinese Music Research Reports, CHIME, Newsletter of the Institute for Studies in American Music, and Mitteilungen der Paul Sacher Stiftung. His book, The Music of Chou Wen-chung, was released in 2009 by Ashgate Publishing. Other contributions include "Pipa Artists and Their Music in Late Ming China" (Ming Studies 58, 2008), "Musical Brushstrokes: Calligraphy and Texture in Chou Wen-chung’s Music" (in Polycultural Synthesis in the Music of Chou Wen-chung, ed. Mary Arlin and Mark Radice, Routledge, 2018), and "The Formal Ramifications of Bruckner’s Bipartite Sonata Form," (Music Analysis, 2018).