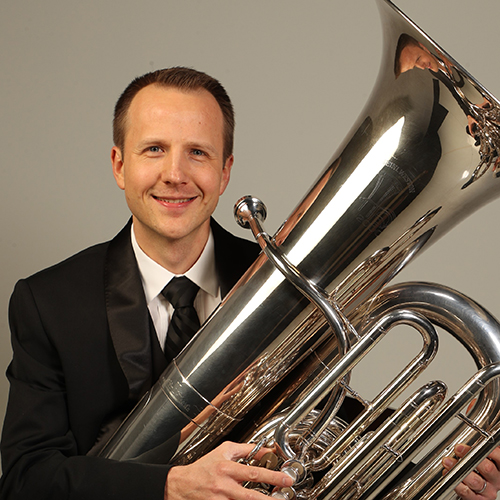 Professor of Euphonium and Tuba

Dr. Kent Eshelman, Professor of Euphonium and Tuba, joined the Baylor faculty in 2009 following appointments at Northern Arizona University, Western Kentucky University, and Grand Valley State University. He received his education at the University of Michigan (BM in Tuba Performance, BFA in Jazz Studies–Piano), the University of Wisconsin-Madison (MM in Tuba Performance), and Michigan State University (DMA in Tuba Performance). At UW-Madison he held the Prize University Fellowship and at Michigan State the University Distinguished Fellowship. As a soloist, he is a winner of the Jeju (South Korea) and Leonard Falcone (USA) international solo competitions, the Midland-Odessa Symphony national young artist competition, and the Rich Matteson international jazz competition, and he has premiered works by Bruce Broughton, Frank Lynn Payne, and Anthony Plog. His recordings include two solo albums, Message in a Tuba and Flavors; a brass quintet album, Four American Stories (with Baylor Brass); a jazz album, Life is Good; and a boogie-woogie and stride piano album, In the Pocket. He is Principal Tuba of the Waco Symphony Orchestra and has performed with the orchestras of Grand Rapids, Toledo, and San Antonio as well as with the Sotto Voce Quartet. A Denis Wick Artist, he has been featured at many euphonium-tuba conferences, including as soloist with the Ventoscala Symphony Orchestra in Budapest and the U.S. Army Blues Jazz Ensemble in Washington, D.C.  He is a recipient of the Roger Bobo Award for Excellence in Recording from the International Euphonium-Tuba Association and the Outstanding Professor award from Baylor University.