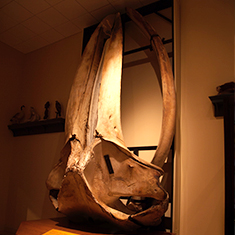 Many of the beloved artifacts from the Strecker Museum's collections, such as the tree cross-section and the humpback whale skull, are on display. The room is patterned after the style of early natural history museums. At that time, museum items were presented purely for visual entertainment and shock value and were rarely labeled. 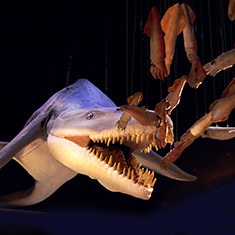 At various times during the Cretaceous period Waco and much of Texas were under a shallow sea. This explains the lack of dinosaur fossils and the abundance of marine reptile and invertebrate fossils in Central Texas. Explore discoveries from the Waco area, including a life-sized representation of a 28-foot-long Pliosaur. 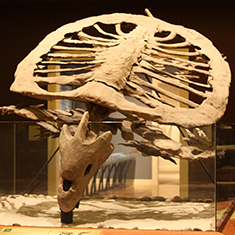 Experience the size of an ancient sea turtle (Protostega gigas) found outside of Gholson, Texas less than 20 miles from Waco. The monumental sea turtle is framed by dioramas featuring the varying landscapes in Texas as well as walk-in dioramas that include a Limestone Cave, a Texas Forest, and the Waco Mammoth Site Exhibit. 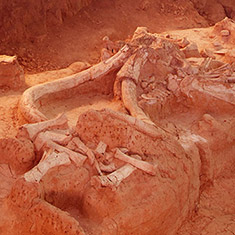 The Waco Mammoth National Monument exhibit offers visitors an additional way to experience the internationally known Waco Mammoth National Monument. Approximately 68,000 years ago, a herd of Columbian Mammoths was trapped in a sudden flash flood along the banks of the Bosque River. The adult mammoths tried to save the juveniles by lifting them above the surging water with their tusks, but all were killed when the mud river banks caved in. The bones were preserved until the first fossil was discovered in 1978. Since then, researchers from around the world have uncovered twenty-five mammoths and made many new discoveries regarding the physical characteristics and behavior of the species.

The Waco Mammoth National Monument exhibit displays original casts of the fossils beneath a glass floor, allowing visitors a unique, up-close view of exactly how excited excavators found the mammoth bones at the site. A large-screen film and interactive stations tell visitors the story of the mammoth's lives in Texas and the remarkable scientific discoveries at the site.

Material removed from the site is housed at the Mayborn Museum Complex, which serves as a repository for the National Parks Service. 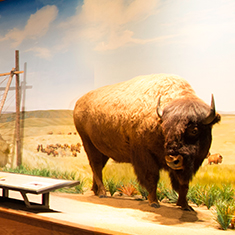 Learn about four types of homes utilized by local people in the 19th century, including a Waco Indian grass house, a Norwegian rock house, a Comanche tipi, and an early log house.