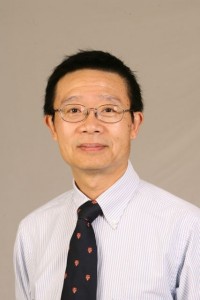 Ph.D. in Mathematics, University of Cambridge, 1990

Dr. Sheng joined the Baylor faculty in August 2005. Prior to coming to Baylor he held a research position in University of London (1989-1990), a visiting professor position in Baylor University (2003) and faculty positions in National University of Singapore (1990-1995), University of Louisiana (1996-2001) and University of Dayton (2001-2005). He was a recipient of the J. T. Knight Prize in Mathematics (1987), Lundgren Research Award (1989), and Ky and Y. Fan Award from the AMS (2017). Dr. Sheng was an invited research participant of the Isaac Newton Institute for Mathematical Sciences, Cambridge, England (2007, 2015, 2019). He was a U.S. Air Force Research Fellow (2005-2013). He has been on the NSF Panel Board since 2014. Dr. Sheng has been an Editor-in-Chief of International Journal of Computer Mathematics, an SCI journal published by Taylor and Francis since 2010. Dr. Sheng directed a number of doctoral dissertations, M.S. theses and several undergraduate research projects. He is married to Helen. They have two sons. He enjoys reading, painting, traveling and spending time with the family.

Dr. Sheng's research is in applied and computational mathematics. In particular, he is interested in splitting and adaptive methods for solving singular partial differential equations. He is also interested in financial mathematics, deep machine learning and algorithm designs. He has been involved in cross-disciplinary projects in scientific and engineering computations. Dr. Sheng has been active in his research fields and community. He is on editorial boards of several scholarly journals and special research issues. He gives presentational in major national and international conferences. His projects have been supported by the United States Air Force Research Laboratory and Department of Defense.

Dr. Sheng's teaching interests range from introductory calculus classes to specialized courses for graduate students. He has been offering individual study courses on numerical methods for partial differential equations, approximation theory and methods as well as computational finance for graduate and undergraduate students.